Pros and Cons of the US Economy 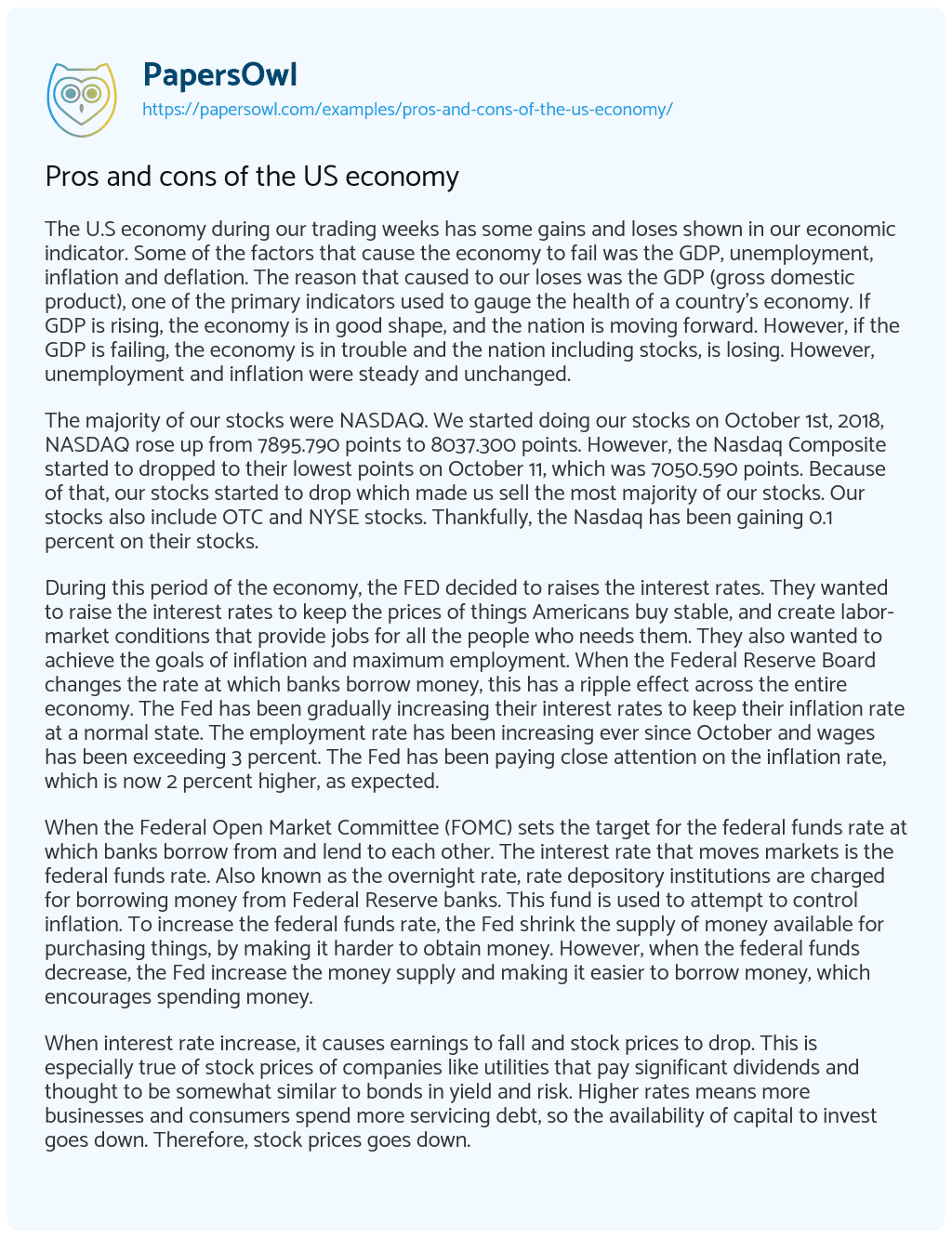 The U.S economy during our trading weeks has some gains and loses shown in our economic indicator. Some of the factors that cause the economy to fail was the GDP, unemployment, inflation and deflation. The reason that caused to our loses was the GDP (gross domestic product), one of the primary indicators used to gauge the health of a country’s economy. If GDP is rising, the economy is in good shape, and the nation is moving forward. However, if the GDP is failing, the economy is in trouble and the nation including stocks, is losing. However, unemployment and inflation were steady and unchanged.

The majority of our stocks were NASDAQ. We started doing our stocks on October 1st, 2018, NASDAQ rose up from 7895.790 points to 8037.300 points. However, the Nasdaq Composite started to dropped to their lowest points on October 11, which was 7050.590 points. Because of that, our stocks started to drop which made us sell the most majority of our stocks. Our stocks also include OTC and NYSE stocks. Thankfully, the Nasdaq has been gaining 0.1 percent on their stocks.

During this period of the economy, the FED decided to raises the interest rates. They wanted to raise the interest rates to keep the prices of things Americans buy stable, and create labor-market conditions that provide jobs for all the people who needs them. They also wanted to achieve the goals of inflation and maximum employment. When the Federal Reserve Board changes the rate at which banks borrow money, this has a ripple effect across the entire economy. The Fed has been gradually increasing their interest rates to keep their inflation rate at a normal state. The employment rate has been increasing ever since October and wages has been exceeding 3 percent. The Fed has been paying close attention on the inflation rate, which is now 2 percent higher, as expected.

When interest rate increase, it causes earnings to fall and stock prices to drop. This is especially true of stock prices of companies like utilities that pay significant dividends and thought to be somewhat similar to bonds in yield and risk. Higher rates means more businesses and consumers spend more servicing debt, so the availability of capital to invest goes down. Therefore, stock prices goes down.

Pros and cons of the US economy. (2021, Oct 16). Retrieved from https://papersowl.com/examples/pros-and-cons-of-the-us-economy/

The Pros and Cons of Online Shopping