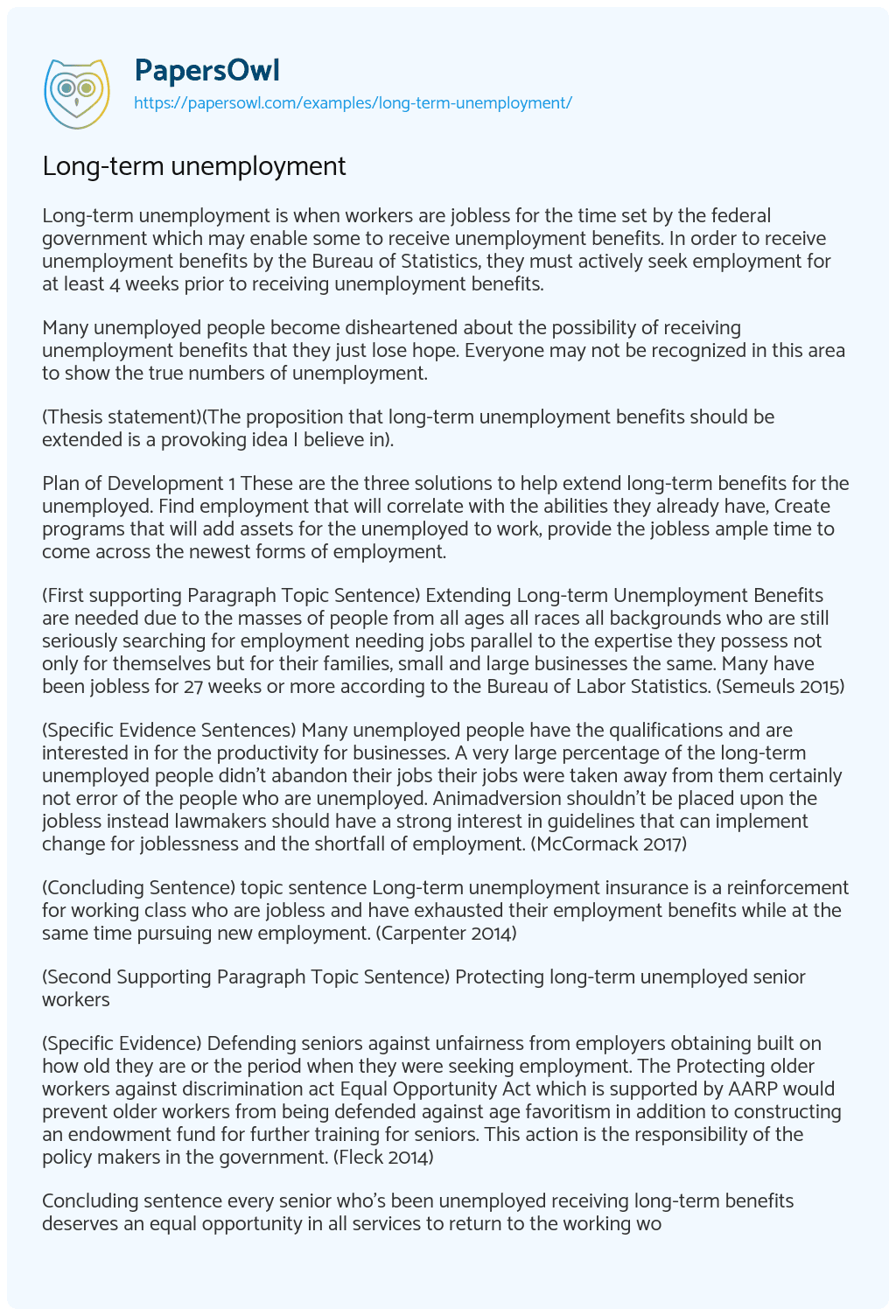 Many unemployed people become disheartened about the possibility of receiving unemployment benefits that they just lose hope. Everyone may not be recognized in this area to show the true numbers of unemployment.

(Thesis statement)(The proposition that long-term unemployment benefits should be extended is a provoking idea I believe in).

(First supporting Paragraph Topic Sentence) Extending Long-term Unemployment Benefits are needed due to the masses of people from all ages all races all backgrounds who are still seriously searching for employment needing jobs parallel to the expertise they possess not only for themselves but for their families, small and large businesses the same. Many have been jobless for 27 weeks or more according to the Bureau of Labor Statistics. (Semeuls 2015)

(Specific Evidence Sentences) Many unemployed people have the qualifications and are interested in for the productivity for businesses. A very large percentage of the long-term unemployed people didn’t abandon their jobs their jobs were taken away from them certainly not error of the people who are unemployed. Animadversion shouldn’t be placed upon the jobless instead lawmakers should have a strong interest in guidelines that can implement change for joblessness and the shortfall of employment. (McCormack 2017)

(Concluding Sentence) topic sentence Long-term unemployment insurance is a reinforcement for working class who are jobless and have exhausted their employment benefits while at the same time pursuing new employment. (Carpenter 2014)

(Specific Evidence) Defending seniors against unfairness from employers obtaining built on how old they are or the period when they were seeking employment. The Protecting older workers against discrimination act Equal Opportunity Act which is supported by AARP would prevent older workers from being defended against age favoritism in addition to constructing an endowment fund for further training for seniors. This action is the responsibility of the policy makers in the government. (Fleck 2014)

Concluding sentence every senior who’s been unemployed receiving long-term benefits deserves an equal opportunity in all services to return to the working world.

Many of the long-term unemployed some nearly 2 years of trying to join the work-force and many interviews and hundreds of submissions of applications for some willing to accept offer below their skills and still there are still over one million people without jobs for half a year. There are businesses who disfavor based on various reason such age spaces in employment suspect their skills are tarnished all these factors prevent those long-term unemployed people from receiving employment. (Bahler 2017)

The Legislators are responsible for creating standards for the protection of all unemployed workers which is why the solution should always be to service the unemployed with whatever tools and resources to return back to the working class.

There is a belief it would be corrupt for this country to use guiding principles to cover long-term unemployment benefits to the jobless instead of constructing more occupations. (Session February2014)

Lengthening unemployment benefits beyond the allotted time of 26 weeks that they are funded for some believe it’s an injustice to the workforce. (Paul 2013)

Social Democrats handed over a shot in the arm, tax surges and Obama-care which was accomplished with the belief it was going to be serving the people of consequences for fairness. The only thing given is mayhem. (McConnell January 2014)

Those who are in long-term period of being jobless are the people who are the most defenseless group of unemployed people at this juncture who are needing long-term unemployment benefits along with job training and jobs that match their skill level.

Today the year 2018 there are still many who are unemployed long-term and who continue searching to join the work-force for many it’s half a year or longer in which the way they became unemployed can cause by 2 different elements that were not of the workers doing that can caused a person to be unemployed long-term. The jobless who aren’t able to find employment or job training lose the ability to be updated with skills that can allow them back into the workforce and with ample to time to search for work the evidence of job training would be seen in job growth. (Amadeo 2018)

Research has proven there is no bearing contradicting consequences of the jobless benefit extension for occupations creations. There is a benefit to utilizing long-term benefits to aid in the fight over employment and those who are jobless and chooses to sit tight for a higher quality job probably will demand a greater wages. ( Marinescu 2016)

Concluding Sentence Long-term benefits can save the jobless their families and help business in the communities they live in.

Appropriate actions from the government to assist the long term jobless with long-term benefits job training and ample time to join the working force can allow the jobless to still be productive members of society by being to help themselves their families and businesses alike which would be the evidence for the government to see where the investment in long-term benefits pay off help the jobless their families and the business in the communities they live in.

The Economy can be in a robust position construction of homes can have a better market the financial market can continue to rise there is still burden the jobless and their families must carry without aid through those very tough times of long-term unemployment without job training ample time to gain employment the jobless their families and the businesses in their communities will suffer.

Those who are jobless that are utilizing long-term benefits deserve an opportunity to demonstrate their abilities through job training and ample time to join the work.

There are millions of unemployed people who have already paid their fair share of taxes into this system and this system should be working for those who receive long-term benefits to allow the jobless to continue being productive members of society.

Unemployment in the Country

Unemployment as a Social Issue

Discussion of Government and Unemployment Insurance