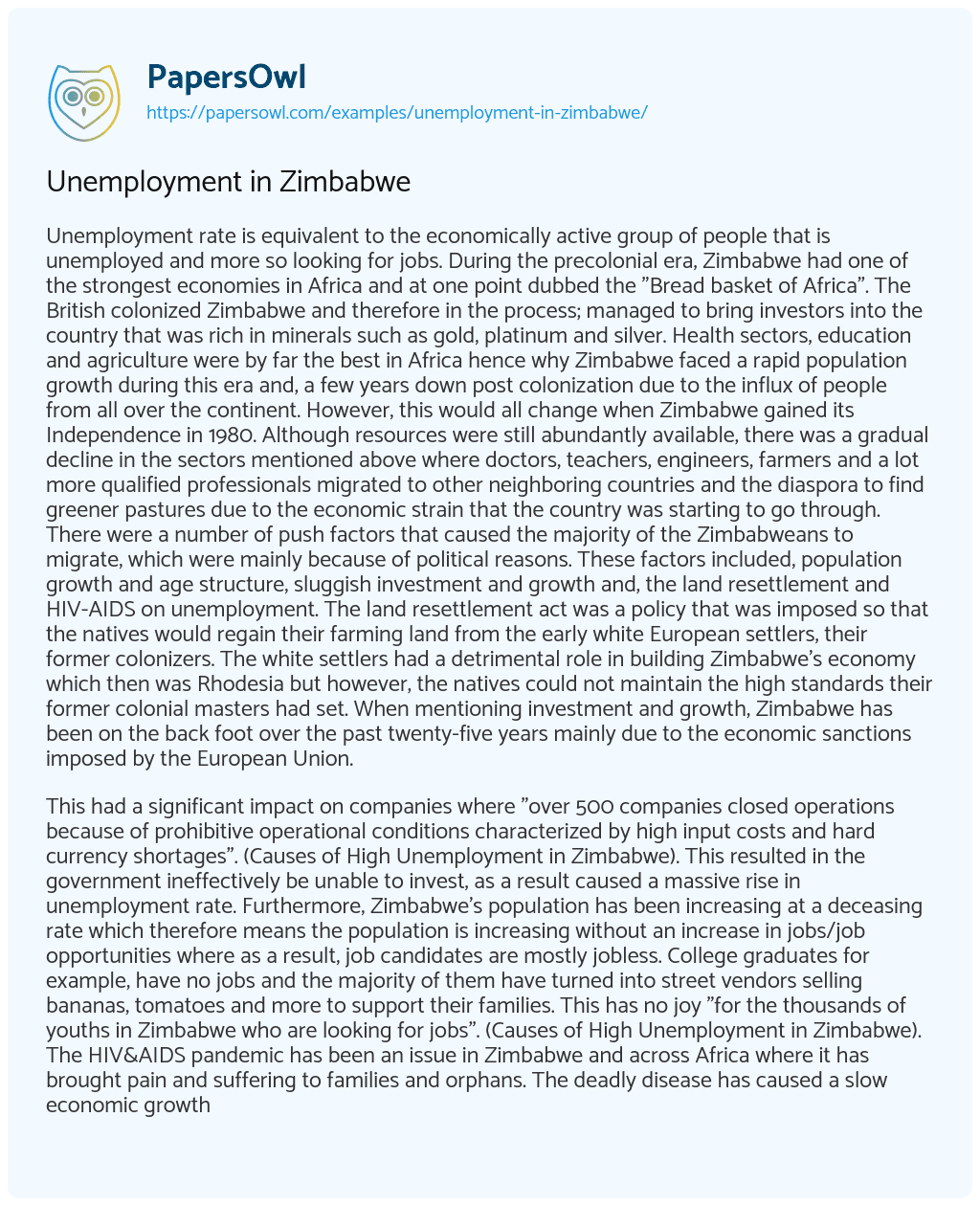 Unemployment rate is equivalent to the economically active group of people that is unemployed and more so looking for jobs. During the precolonial era, Zimbabwe had one of the strongest economies in Africa and at one point dubbed the “Bread basket of Africa”. The British colonized Zimbabwe and therefore in the process; managed to bring investors into the country that was rich in minerals such as gold, platinum and silver. Health sectors, education and agriculture were by far the best in Africa hence why Zimbabwe faced a rapid population growth during this era and, a few years down post colonization due to the influx of people from all over the continent. However, this would all change when Zimbabwe gained its Independence in 1980. Although resources were still abundantly available, there was a gradual decline in the sectors mentioned above where doctors, teachers, engineers, farmers and a lot more qualified professionals migrated to other neighboring countries and the diaspora to find greener pastures due to the economic strain that the country was starting to go through. There were a number of push factors that caused the majority of the Zimbabweans to migrate, which were mainly because of political reasons. These factors included, population growth and age structure, sluggish investment and growth and, the land resettlement and HIV-AIDS on unemployment. The land resettlement act was a policy that was imposed so that the natives would regain their farming land from the early white European settlers, their former colonizers. The white settlers had a detrimental role in building Zimbabwe’s economy which then was Rhodesia but however, the natives could not maintain the high standards their former colonial masters had set. When mentioning investment and growth, Zimbabwe has been on the back foot over the past twenty-five years mainly due to the economic sanctions imposed by the European Union.

This had a significant impact on companies where “over 500 companies closed operations because of prohibitive operational conditions characterized by high input costs and hard currency shortages”. (Causes of High Unemployment in Zimbabwe). This resulted in the government ineffectively be unable to invest, as a result caused a massive rise in unemployment rate. Furthermore, Zimbabwe’s population has been increasing at a deceasing rate which therefore means the population is increasing without an increase in jobs/job opportunities where as a result, job candidates are mostly jobless. College graduates for example, have no jobs and the majority of them have turned into street vendors selling bananas, tomatoes and more to support their families. This has no joy “for the thousands of youths in Zimbabwe who are looking for jobs”. (Causes of High Unemployment in Zimbabwe). The HIV&AIDS pandemic has been an issue in Zimbabwe and across Africa where it has brought pain and suffering to families and orphans. The deadly disease has caused a slow economic growth rate meaning the country will have a low rate job generation. The resettlement act imposed by the government as mentioned earlier on meant that a lot of farm workers including the white settlers lost their jobs and their source of income without being reallocated some portions of land that they previously owned. This meant that the government created more problems that they could not solve. This however, explains why Zimbabwe experienced a low income percentage from 1980 to 2014 as illustrated by the gapminder diagram. Zimbabwe has been between income level 1 and 2 comparing it with the unemployment rate from ages 15 and above which meant that a few individuals earned at least $2,000 a month. The statistics showed that Zimbabwe, India, Nicaragua and Pakistan have been in the same pool of being on the lower end of the spectrum in terms of income and high on unemployment; except for a few countries like Mozambique.

Past research believed that “Zimbabwe is a victim of the success of its Education For All policy (EFA)” which has been successful since 1980 making certified graduates with diplomas from schools and colleges fill the economy, which in return has not been growing to accommodate the huge number of graduates. (Bhebhe, Thomas B). Unemployment has hindered graduates in many ways such as marrying, and living independently. One interesting fact is that; educated females entering adulthood cannot be married by their peers, or age mates due to unemployment hence why they end up getting married to “older men who have money which they desperately need” (Bhebhe, Thomas B). Zimbabwe has a massive unemployment rate of “85% in a sample Southern Africa Developing Countries (SADC), with an average unemployment rate of 18%” (Rusvingo, Silas, L). The author of the journal, “The ticking time bomb” believed that the country was in its own nutshell and miles away from its neighboring counties and the rest of Africa due to the statistics given above. It is a no brainer that job marketing in Zimbabwe was sinking with people fleeing the country leaving the country facing a “brain drain” with lack of doctors to help people suffering from deadly diseases, teachers who could teach at every level of education, farmers who could adopt new farming techniques from the developed countries and engineers; who could help with the new technology such as farming tools and come up with new ideas on infrastructure. Over the past twenty five years, company closures and retrenchments “forced thousands into illegal gold mining, flea marketing and vendoring to make a living”. (Rusvingo, Silas, L).

The young youths mostly aged from sixteen to thirty six are finding it difficult to find jobs and support their families; especially those that have children going to school who end up being expelled due to nonpayment of tuition. The burden of unemployment is causing resentment among the young adults who many of them have lost hope of achieving their goals in their lives. They are now facing a gloom future for their children as they are unable to supply the basic needs of life that everyone is supposed to have, which is education and a good healthcare. The Standard source said “The trauma faced by the unemployed is so depressing that even the strong hearted are driven into indulging in anti-social activities to make ends meet” such as gambling. (The Standard) Zimbabwe is becoming a nation that is widely divided due to the larger social economic gap. However, in urban areas; unemployment often blends in with dissolution of communities. The lack of attachment and support turns into social instability. Having said that, youths are the most productive and energetic group in any population but one source, Journal of Humanities and Social Science argues that the core of the highly skilled age group comes from the youths and, “what they lack, which those above 36 years old have is work experience”. (Sen, Paroma). It goes on to argue that, if the energies of the youths who were educated were properly nurtured into being productive; most economies in the Third World would not be in all sorts of predicaments they are in right now. Meanwhile “the International Labor Organisation (ILO) defines youths as people in the age groups 15-24 slightly differs from the United States of America 16-24” (Bebe, Thomas B).

The educated youths are regarded as those who complete full time education and hold some sort of degree and, or diploma. However, numerous tertiary colleges have been introduced in Zimbabwe, and yet there have not been sufficient infrastructure to absorb the majority of youths seeking jobs and training opportunities. Having said that, “all stakeholders, citizens and the government must all be actively involved in the reduction of unemployment” (Causes of High Unemployment in Zimbabwe). Without effort in harboring this problem, unemployment will possibly increase, economic conditions will become worse making it difficult to keep the investors and the companies that survived before last longer. Unemployment is like a self-created bomb for the government and its people that will eventually be forced to explode.

Unemployment in the Country