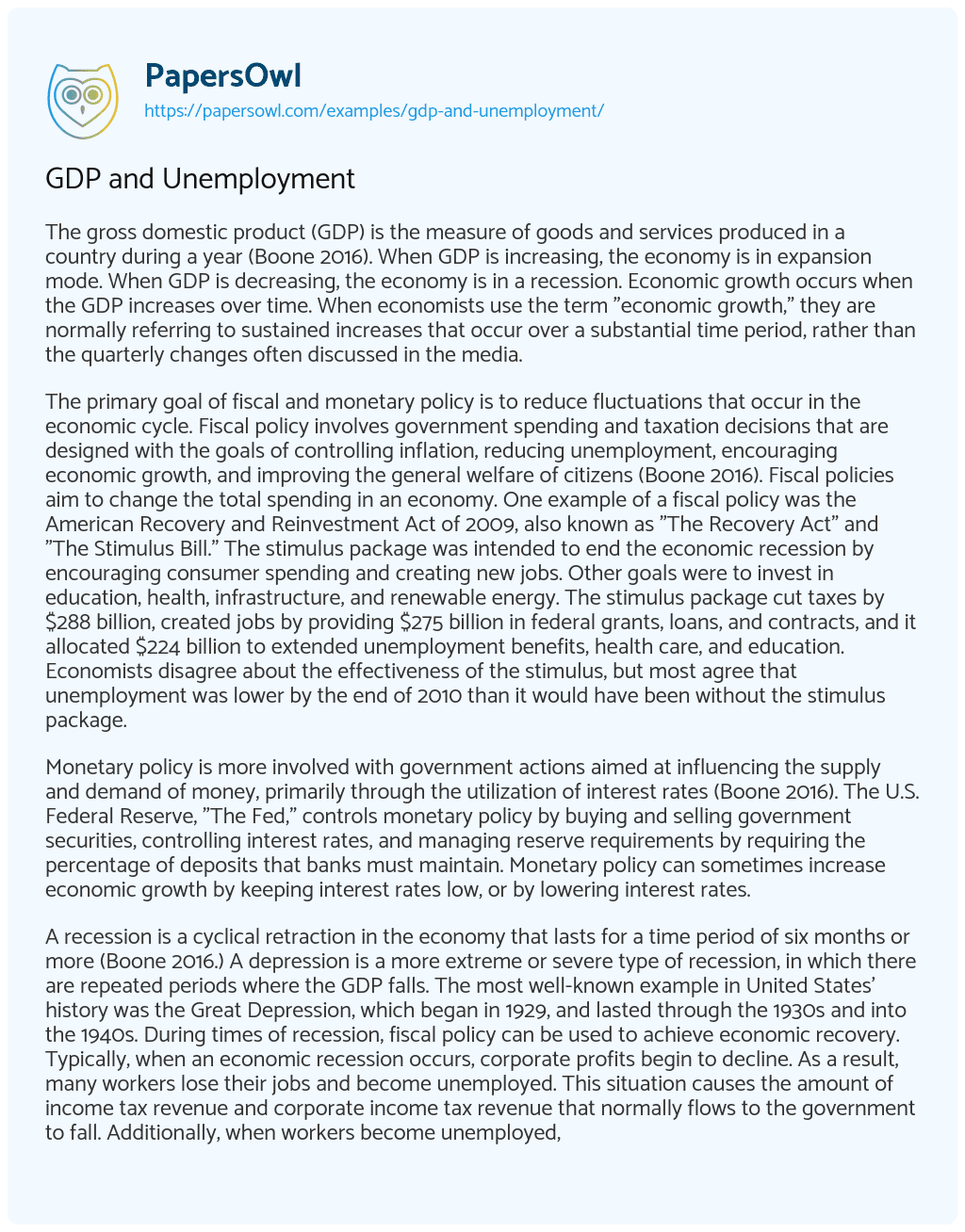 The gross domestic product (GDP) is the measure of goods and services produced in a country during a year (Boone 2016). When GDP is increasing, the economy is in expansion mode. When GDP is decreasing, the economy is in a recession. Economic growth occurs when the GDP increases over time. When economists use the term “economic growth,” they are normally referring to sustained increases that occur over a substantial time period, rather than the quarterly changes often discussed in the media.

The primary goal of fiscal and monetary policy is to reduce fluctuations that occur in the economic cycle. Fiscal policy involves government spending and taxation decisions that are designed with the goals of controlling inflation, reducing unemployment, encouraging economic growth, and improving the general welfare of citizens (Boone 2016). Fiscal policies aim to change the total spending in an economy. One example of a fiscal policy was the American Recovery and Reinvestment Act of 2009, also known as “The Recovery Act” and “The Stimulus Bill.” The stimulus package was intended to end the economic recession by encouraging consumer spending and creating new jobs. Other goals were to invest in education, health, infrastructure, and renewable energy. The stimulus package cut taxes by $288 billion, created jobs by providing $275 billion in federal grants, loans, and contracts, and it allocated $224 billion to extended unemployment benefits, health care, and education. Economists disagree about the effectiveness of the stimulus, but most agree that unemployment was lower by the end of 2010 than it would have been without the stimulus package.

A recession is a cyclical retraction in the economy that lasts for a time period of six months or more (Boone 2016.) A depression is a more extreme or severe type of recession, in which there are repeated periods where the GDP falls. The most well-known example in United States’ history was the Great Depression, which began in 1929, and lasted through the 1930s and into the 1940s. During times of recession, fiscal policy can be used to achieve economic recovery. Typically, when an economic recession occurs, corporate profits begin to decline. As a result, many workers lose their jobs and become unemployed. This situation causes the amount of income tax revenue and corporate income tax revenue that normally flows to the government to fall. Additionally, when workers become unemployed, their dependency on government programs, like unemployment insurance, increases. This increased dependency on unemployment insurance and other government programs results in more government spending. To help the nation’s economy recover from recession, the government sometimes creates new social programs, such as “The New Deal,” a program of President Franklin D. Roosevelt’s administration during the 1930s. Franklin’s deal was enacted with the goal of alleviating the suffering of the many unemployed workers. New government agencies were established, such as the Civilian Conservation Corps (CCC) and the Works Progress Administration (WPA), that were intended to provide emergency, short-term government aid, as well as provide temporary jobs for the unemployed workers in the form of projects in the national forests and construction projects.

Unemployment as a Social Issue