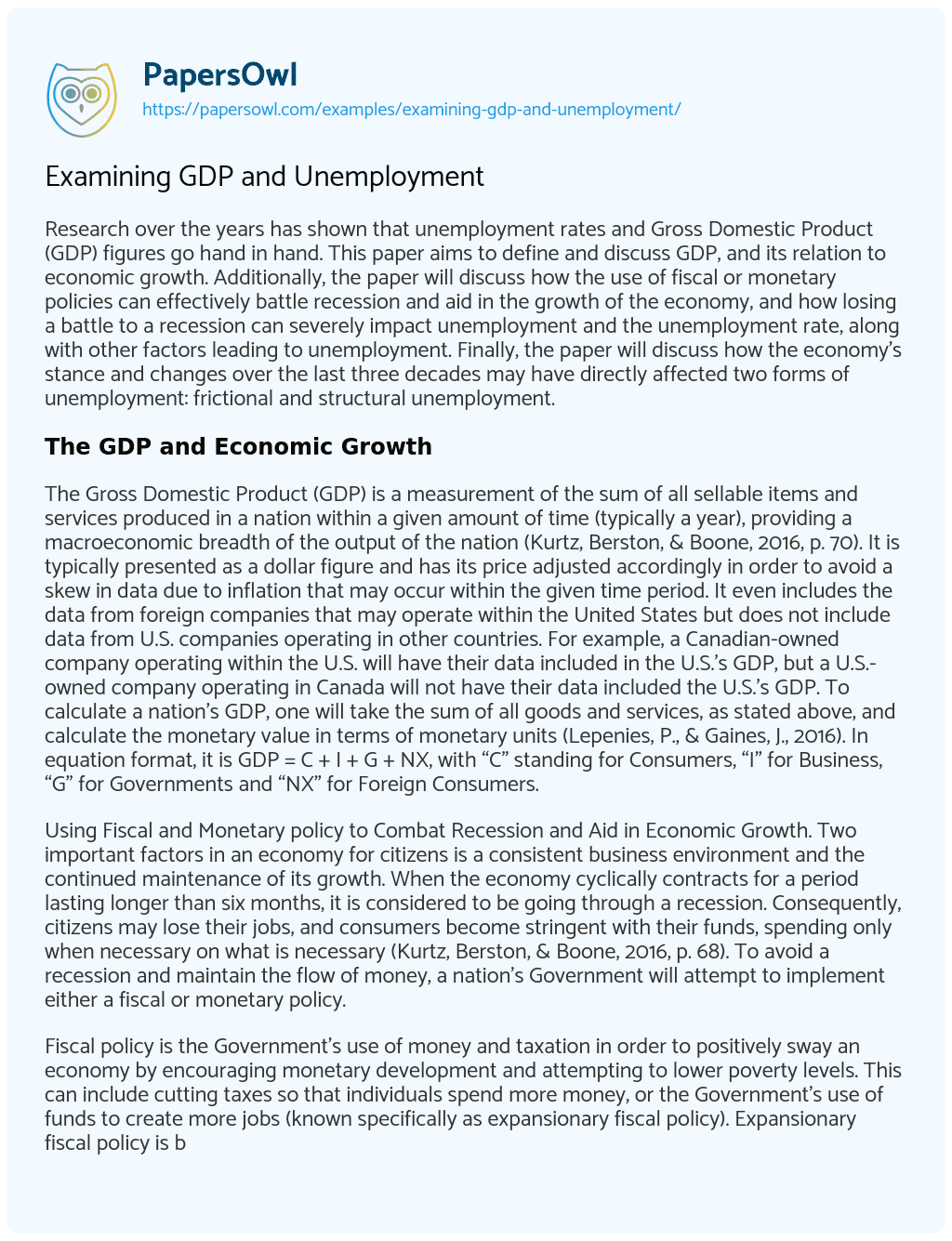 Research over the years has shown that unemployment rates and Gross Domestic Product (GDP) figures go hand in hand. This paper aims to define and discuss GDP, and its relation to economic growth. Additionally, the paper will discuss how the use of fiscal or monetary policies can effectively battle recession and aid in the growth of the economy, and how losing a battle to a recession can severely impact unemployment and the unemployment rate, along with other factors leading to unemployment. Finally, the paper will discuss how the economy’s stance and changes over the last three decades may have directly affected two forms of unemployment: frictional and structural unemployment.

The GDP and Economic Growth

The Gross Domestic Product (GDP) is a measurement of the sum of all sellable items and services produced in a nation within a given amount of time (typically a year), providing a macroeconomic breadth of the output of the nation (Kurtz, Berston, & Boone, 2016, p. 70). It is typically presented as a dollar figure and has its price adjusted accordingly in order to avoid a skew in data due to inflation that may occur within the given time period. It even includes the data from foreign companies that may operate within the United States but does not include data from U.S. companies operating in other countries. For example, a Canadian-owned company operating within the U.S. will have their data included in the U.S.’s GDP, but a U.S.-owned company operating in Canada will not have their data included the U.S.’s GDP. To calculate a nation’s GDP, one will take the sum of all goods and services, as stated above, and calculate the monetary value in terms of monetary units (Lepenies, P., & Gaines, J., 2016). In equation format, it is GDP = C + I + G + NX, with “C” standing for Consumers, “I” for Business, “G” for Governments and “NX” for Foreign Consumers.

Using Fiscal and Monetary policy to Combat Recession and Aid in Economic Growth. Two important factors in an economy for citizens is a consistent business environment and the continued maintenance of its growth. When the economy cyclically contracts for a period lasting longer than six months, it is considered to be going through a recession. Consequently, citizens may lose their jobs, and consumers become stringent with their funds, spending only when necessary on what is necessary (Kurtz, Berston, & Boone, 2016, p. 68). To avoid a recession and maintain the flow of money, a nation’s Government will attempt to implement either a fiscal or monetary policy.

Fiscal policy is the Government’s use of money and taxation in order to positively sway an economy by encouraging monetary development and attempting to lower poverty levels. This can include cutting taxes so that individuals spend more money, or the Government’s use of funds to create more jobs (known specifically as expansionary fiscal policy). Expansionary fiscal policy is believed to be able to so shift an economy as to create and maintain enough full-time employment to counter any recession (Horton, M., & El-Ganainy, A. 2009) (Palley, T. 2014).

Monetary policy, not influenced by the Government but rather by central banks independent of the elected government, is the tweaking of the supply of monies in a nation’s economy in order to gain a favorable balance of inflation and output steadiness. The monetary policy typically calls for an increase in prices due to the increase in the money supply that it puts out but proves its worth by pushing back against the recessive direction that an economy may be heading toward. Adjustments to an economy’s money through monetary policy is done through open market operations, where “short-term” debt from the Government is traded with the central bank. While previously publicly focused on the growth of money, central banks now more commonly conduct monetary policy with a focus on inflation, since the parallel between money and prices is becoming increasingly difficult to measure (Mathai, K. 2009).

Causes of unemployment. Most commonly agreed upon causes for unemployment include economic recessions, the globalization of markets and their production, and various advancements in technologies. Additionally, the U.S. has recently been importing a much larger portion of goods and services than it has been exporting. In other words, spending more money than what they’re making (Tong, C. H., Tong, L., & Tong, J. E. 2012). Here is where fiscal and monetary policies can make their greatest plays. By exercising fiscal policy, the Government’s use of money to create more jobs will have an obvious positive impact on the economy. By reducing the amount of work being manufactured overseas for the U.S. and instead providing those jobs to U.S. citizens, the unemployment rate may lower. Additionally, with fiscal policy, the lowering of taxes will help stimulate cash flow. Those with steady and secure work are more likely to spend money, especially when taxes are lower.

The Economic Effect on Frictional and Structural Unemployment

While the recession lasting from 2007-2009 was not the only recession in the past three decades in the U.S., it is notably the only one in which employment declined the most rapidly and unemployment rates skyrocketed faster than the rates in previous recessions. It’s safe to say that frictional unemployment made up a good portion of the unemployment rate, due to many industries, including the goods-producing industry, projecting the largest declines in employment at the time. The events can be described as mass layoffs—when a minimum of 50 claims for unemployment are filed within an organization over a span of five consecutive weeks (The Recession of 2007-2009, 2012).

In the years following the recession, the employment rate began to climb again. Although, not in every field. Education, health, and business services industries nearly doubled in recent years, with the manufacturing industry steadily declining. This is likely a cause of structural unemployment, as those factory workers may have given up looking for work within the U.S. because of globalization, advancements in technology and outsourcing of jobs to foreign locations with cheaper labor costs. Additionally, research has shown an increase of 83% from 1980 to 2015 in jobs requiring skills including interpersonal, management and communication as opposed to physical capabilities (“Changes in the American workplace”, 2016).

Changes in the American workplace. (2016). Retrieved from http://www.pewsocialtrends.org/2016/10/06/1-changes-in-the-american-workplace/

Unemployment Within the Economics

Unemployment in the U.S