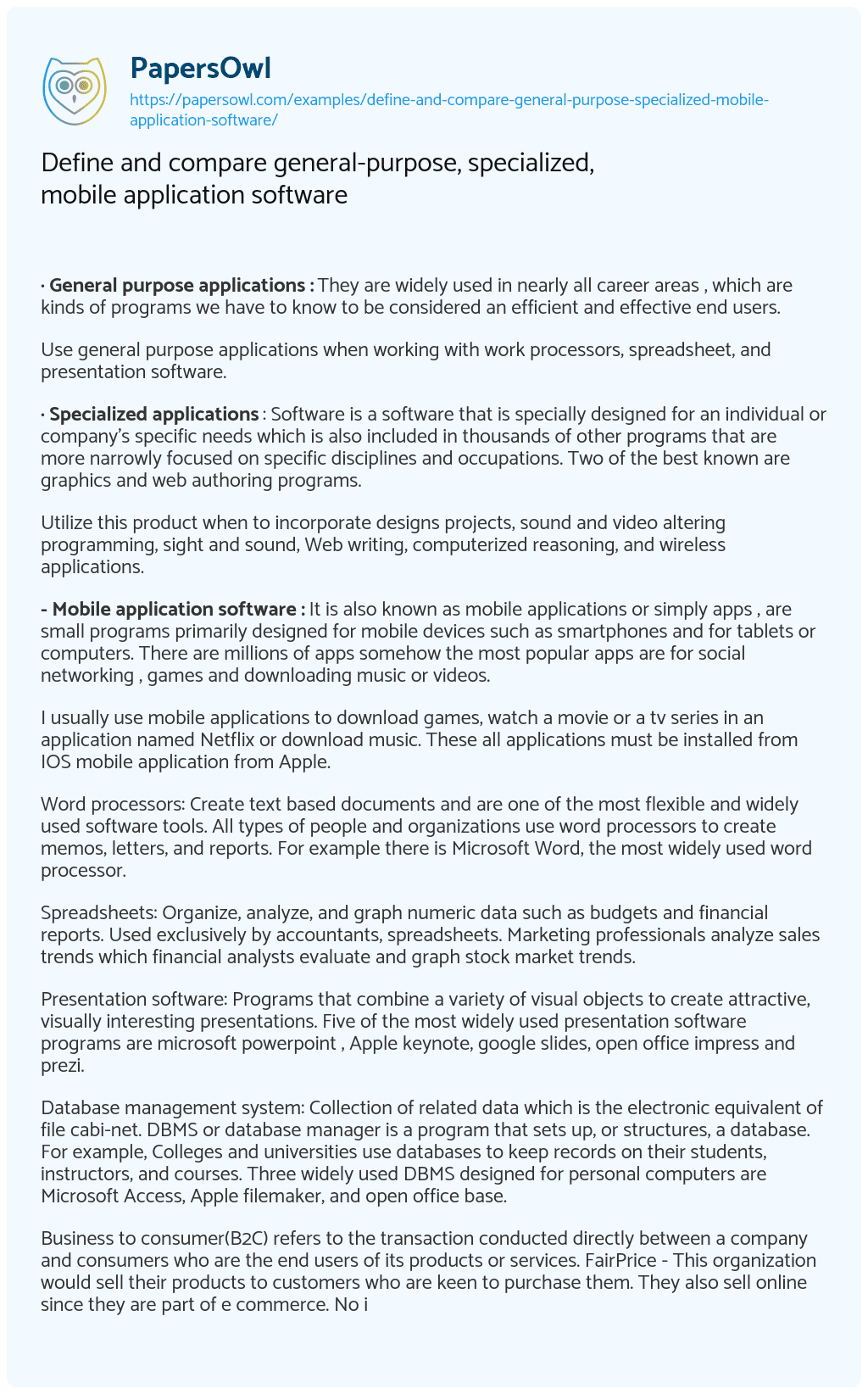 · General purpose applications : They are widely used in nearly all career areas , which are kinds of programs we have to know to be considered an efficient and effective end users.

Use general purpose applications when working with work processors, spreadsheet, and presentation software.

· Specialized applications : Software is a software that is specially designed for an individual or company’s specific needs which is also included in thousands of other programs that are more narrowly focused on specific disciplines and occupations. Two of the best known are graphics and web authoring programs.

– Mobile application software : It is also known as mobile applications or simply apps , are small programs primarily designed for mobile devices such as smartphones and for tablets or computers. There are millions of apps somehow the most popular apps are for social networking , games and downloading music or videos.

Database management system: Collection of related data which is the electronic equivalent of file cabi-net. DBMS or database manager is a program that sets up, or structures, a database. For example, Colleges and universities use databases to keep records on their students, instructors, and courses. Three widely used DBMS designed for personal computers are Microsoft Access, Apple filemaker, and open office base.

Business to consumer(B2C) refers to the transaction conducted directly between a company and consumers who are the end users of its products or services. FairPrice – This organization would sell their products to customers who are keen to purchase them. They also sell online since they are part of e commerce. No intermediaries are involved. I think it is convenient because for me they are able to shop online while delivering is also quick.

· Customer to Customer(C2C) is a business model, whereby customers can trade with each other, typically, in an online environment. Two implementations of C2C markets are auctions and classified advertisements.

This transaction takes place between two individuals. No organizations are involved I think it is not convenient because

E-commerce is not considered the safest place. It is generally associated with fraud and deceit. Buyers and sellers may not be confident in their counterparts.

· Business to Business(B2B) situation where one business makes a commercial transaction with another business.

This transaction takes place between two organizations. No individuals are involved.

It is convenient also for better sales because an improved inventory network the board procedure alongside a synergistic methodology increment client dependability in the B2B eCommerce plan of action. This, thus, prompts improved deals. It causes organizations to exhibit item suggestions and open successful upselling and strategically pitching chances

(B) There are many E-commerce retailers that have done well recently. But the company I have chosen is “ Amazon”. Amazon is known as the most popular and fruitful online store and furthermore a main cloud administration provider. Abundance of organizers of Amazon is $ 123.9 billion. Amazon succeeded in bringing in cash as well as picking up trust from heaps of customers.

There are hardly any exercises that business students can acquire from this organization called Amazon:

mobile apps: are add-on programs for a variety of mobile devices, including smartphones and tablets . Sometimes it is also referred to simply as apps , mobile apps have been widely used for years. The traditional applications include address books, to do lists, alarms and message lists. For example, there are over 500,000 apps just for Apple’s Iphone alone or more. Some of the most widely used are for listening to music, viewing video, social networking , shopping, and playing games.

App Stores : It is typically a website that provides access to specific mobile apps that can be downloaded either for a nominal fee or free of charge. There are two best well-known stores which are Apple’s app store and Google Play. Although most of the best known app stores specialize in applications for a particular line of mobile devices, other less well known stores provide apps for a wide variety of mobile devices.

QR Code readers is a type of barcode that contains a matrix of dots. It can be scanned using a QR scanner or a smartphone with a camera built in. For example, scanning a QR code with our phone might open a URL in our phones web browser. All QR codes have a square shape and include three square outlines in the bottom left, top left , and top right corners.

On account of a lot of points of interest from QR code, various associations applied for this advances to their applications Nowadays, there are applications that individuals can check the QR code and pay for it in China. WeChat pay by sifting QR code can be used in promoting, doing audit, portion and glancing through profiles and other more. It is logically versatile and less complex for customers to do portion or discover others. People who use WeChat are repetitive for them to bring cash when they are going out. Since they can clear and pay for it with their phones and move money to their mates or family by QR code. It is pleasing for the person who moves the money since they have no inspiration to go to the bank.

For example, Cinema is everywhere throughout the world, we won’t be prepared to see ticket orderlies to check our ticket since we can channel our own ticket autonomous from any other person and go into the film. A person who has a Cinema in like manner can put aside their money by not utilizing more workers, moreover pleasing for customers that they don’t need to orchestrate lines. In this way there will in any case be in any event one individual who just stands and watches if an individual just goes into watch without paying or brings snacks from outside the cinema.

Utility software is a software designed to help to analyze, configure, optimize or maintain a computer. It is used to support the computer infrastructure which contrast to application software, which is aimed at directly performing tasks that benefit ordinary users. Utility software is also important because operating systems control the computer hardware and act as a n interface with applications programs. It also helps to manage, maintain and control computer resources. There are some examples of utility programs which are antivirus software, backup software and disk tools.

I as a rule use ‘Backup utility’ with my mobile or PC to back up the entirety of my information. At whatever point I change to new items or when a portion of my information or documents are no more. It is alright for me that I despite everything can get back my lost documents or information once more. For best outcomes, reinforcement duplicates are made on a reliable, normal premise to limit the sum information lost between reinforcements. Holding various duplicates of information gives the protection and adaptability to reestablish to a point in time not influenced by information defilement or vindictive assaults.

Advantages: With the assistance of circle defragmenter, it is conceivable to bring all the parts without a moment’s delay area and raise productivity of working , Virus scanners otherwise called enemy of infection programming assists with securing helpful and significant records on the PC by recognizing them.

Disadvantage: Too numerous utility projects gobble up the memory and the RAM and will back your PC off altogether, programming utilities are not free, and they are costly.

Apple’s very own operating system, iOS runs the company’s iPod, iPad, iPhone and Apple Watch devices. It is only available on Apple products and responds to commands from the user’s fingertips. iOS features iTunes for music and the App Store for everything else. One of the benefits of the Apple operating system is its built-in video chatting and Apple Music capabilities.

Android’s OS is owned by Google and is considered open-source to Apple’s closed system. With an open-source system, software developers can build applications and programs until their heart’s content and users reap the benefits of tons of free software.

Distinction between these two are primary storage of the fundamental stockpiling of the PC or principle memory which is the arbitrary access memory or RAM. Secondary storage, then again, alludes to the external storage used to store information on a long haul premise.

primary- It alludes to the fundamental memory, for example, the arbitrary access memory which is RAM, holds information or guidelines that are as of now being used, date is lost when the gadget loses power.

Secondary- It refers to auxiliary memory which external memory or secondary memory, used to store and retrieve date or information on long term basis , data won’t be loose even though the power loses

I prefer to use primary storage instead of secondary. Even though the primary cost is higher it can access quicker and show higher access speed in comparison to the secondary memory.

Cloud computing is the on-demand availability of computer system resources, especially data storage and computing power, without direct active management by the user. The term is generally used to describe data centers available to many users over the Internet. Typically, application programs are owned by individuals or organizations and stored on their computer system’s hard disks. Therefore cloud computing uses the internet and the web to shift many of these computer activities from the user’s computer to other computers on the internet. Some suggested that cloud computing is merely a marketing term designed to promote new products, many others see cloud computing as a new model for computing that frees users from owning , maintaining, storing software and data. Also it provides access to these services from anywhere through an internet connection.

Cloud storage is a model of computer data storage in which the digital data is stored in logical pools. The physical storage spans multiple servers (sometimes in multiple locations), and the physical environment is typically owned and managed by a hosting company. Cloud storage involves stashing data on hardware in a remote physical location, which can be accessed from any device via the internet. Clients send files to a data server maintained by a cloud provider instead of (or as well as) storing it on their own hard drives.

Cloud storage is used for to pay their cloud data storage on a per-consumption, monthly rate or maintained, managed, backed up remotely and made available to users over a network

Advantage of cloud storage there are Cloud Storage Can Save Costs. Economies of scale, Data Redundancy and Replication. Data redundancy is included, Data Tiering for Cost Savings, Regulatory Compliance , Ransomware/Malware Protection, Backups May Be Slower , Restores May Be Slower, Higher Internet Utilization

Anomaly Detection Software on the Ground

Pros and Cons of having a Mobile Phone