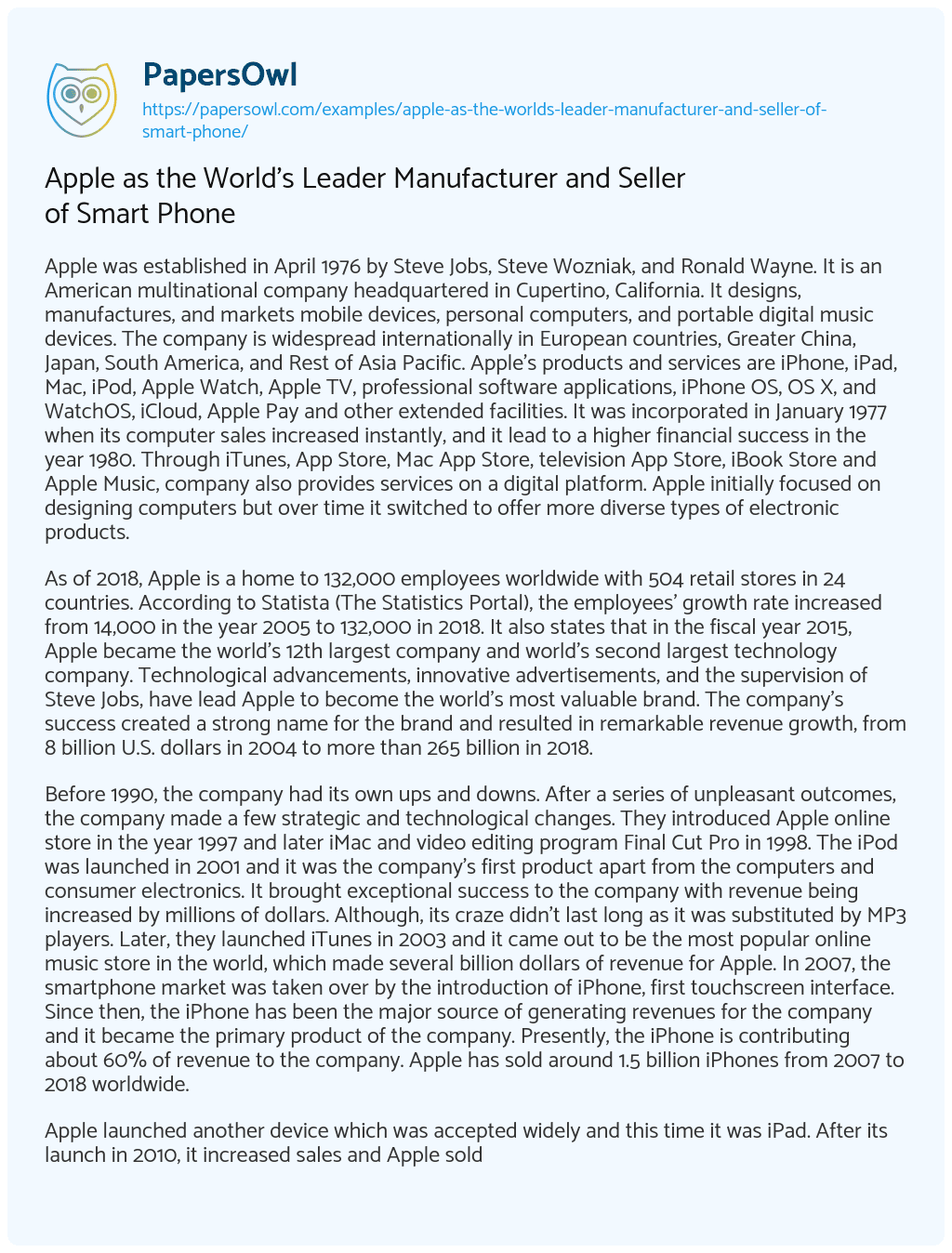 As of 2018, Apple is a home to 132,000 employees worldwide with 504 retail stores in 24 countries. According to Statista (The Statistics Portal), the employees’ growth rate increased from 14,000 in the year 2005 to 132,000 in 2018. It also states that in the fiscal year 2015, Apple became the world’s 12th largest company and world’s second largest technology company. Technological advancements, innovative advertisements, and the supervision of Steve Jobs, have lead Apple to become the world’s most valuable brand. The company’s success created a strong name for the brand and resulted in remarkable revenue growth, from 8 billion U.S. dollars in 2004 to more than 265 billion in 2018.

Before 1990, the company had its own ups and downs. After a series of unpleasant outcomes, the company made a few strategic and technological changes. They introduced Apple online store in the year 1997 and later iMac and video editing program Final Cut Pro in 1998. The iPod was launched in 2001 and it was the company’s first product apart from the computers and consumer electronics. It brought exceptional success to the company with revenue being increased by millions of dollars. Although, its craze didn’t last long as it was substituted by MP3 players. Later, they launched iTunes in 2003 and it came out to be the most popular online music store in the world, which made several billion dollars of revenue for Apple. In 2007, the smartphone market was taken over by the introduction of iPhone, first touchscreen interface. Since then, the iPhone has been the major source of generating revenues for the company and it became the primary product of the company. Presently, the iPhone is contributing about 60% of revenue to the company. Apple has sold around 1.5 billion iPhones from 2007 to 2018 worldwide.

Apple launched another device which was accepted widely and this time it was iPad. After its launch in 2010, it increased sales and Apple sold around 3 million iPads within three months of its arrival. In 2015, with the introduction of Apple watch, Apple made its space in the expanding innovative market. It became a static competition to Samsung, Pebble, and Fitbit. Today, Apple is one of the four big companies of the world alongside IBM, Google and Microsoft. In August 2018, Apple touched one trillion U.S. dollar mark and left behind its competitors by becoming first public company worldwide to reach that position. However, after October its market suddenly dropped lower.
Apple used 4th Dimension software which is also known as Silver Surfer and was founded by Laurent Ribardiere in 1984. It is a relational database management systems. Client-Server version was released together with 4th dimension and it was accessed by both Microsoft windows and Apple Macintosh operating systems. 4D was the first one to have a whole combined web server which helped developers to translate 4D forms into HTML using the only 4D language. In 2004, 4D was able to create standalone, client/server, web and service oriented applications without changing any code.

DBMS have helped by Controlling the data redundancy and integration of the data. The retrieval & updating of data can be done easily in the stored table in DBMS. Through this, company can integrate the tables and associate the relationship of data entities with their specified entities. Integration of data, it helps to build the relationships of the tables (constraints & entities). Managing the shared data is also another benefit of DBMS. The data could be shared easily by the users, but it is only for the administrator which gives the access to the users for sharing the further data. It helps to manage the authorization of accessed users to share the data within the same time, multiple users can share the single data with same time. It also has helped to increase the consistency and control over the concurrency of data. The data redundancy is monitored by the users, so they can easily modify the data & during this the users gets updates instantly. So basically, it manages the data consistency to the authorized users with the new updates. It also improves the accuracy of data for users within the same time on the same panel, which means that concurrency is controlled over the sharing or updating of data.

Choosing hardware and software for an organization is very important for various reasons. This affects the production and quality. Management should choose their assets exactly according to what the organization wants. If they have chosen its assets right, then the management operations will be in an ultimate success or if not, then there can be reduction in quality and can result in a great loss of money. According to my research, I have got to know that one of the DBMS, currently used by Apple Company is NoSQL and cloud database.
NoSQL is often known as “Not Only SQL.” NoSQL is a data base which is used for the data storage and its retrieval. They are different from the relational databases in which the tabular relations are used. In these databases the data is modelled in other forms than the tabular form. These databases are easy to use as they are simple in design and some of the operations are faster in them. When Apple Inc. realized that unstructured text carry tons of information which they are unable to mine using RDBMS, they started exploring ways to store such datasets. After social systems expanded with the significance in the market, NoSQL became very common in the market. It will become very difficult to store the data on RDBMS using NoSQL databases. The guarantee of the NoSQL database has produced a ton of energy, however there are numerous snags to overcome before they can engage standard endeavors.

A cloud database is a database that typically runs on a cloud computing platform, access to it is provided as a service. It is a collection of content, either structured or unstructured, that resides on a private, public or hybrid cloud computing infrastructure platform. It allows organizations, end users and their applications to store, manage and retrieve data from the cloud. The current concern that is faced by Apple is the arising security and privacy issues because of using this DBMS. This also requires a constant internet connection, loss of control over resources and data is tied to the provider.

Apple team focuses on improving the product features and product value proposition so that consumers get better product and their applications. Because of some issues faced using NoSQL database, those databases were almost out of use from the company. Apple bring into effect again Foundation DB which is the one of NoSQL database, as the open source called Apache 2.0 last year. Apache is open source and pioneered a fundamentally new way of storing and processing data. By re-introducing this database which have additional features of support and capabilities, this have solved the current needs of the employers as well as their customers. Mobile devices can store more than just the contact information of users, and can cache and display a large amount of information on a smaller display.

In a conclusion, Apple is the world’s leader manufacturer and seller of smart phone. Apple’s iPhone products are tremendously well-known and in demand continuously and are with highest quality. Apple products are the most valuable products which possess high quality, reliability, technology, features, value etc. Apple do not have any competitor around him. He is leading the world in the smart phone market. The key contribution in the great position of Apple is their clever marketing, great creation and innovation, product leadership with excellent quality and market dominate strategy.

Apple as the World’s Leader Manufacturer and Seller of Smart Phone. (2021, Mar 13). Retrieved from https://papersowl.com/examples/apple-as-the-worlds-leader-manufacturer-and-seller-of-smart-phone/

Apple as One of the Greatest Economic Superpowers in the World