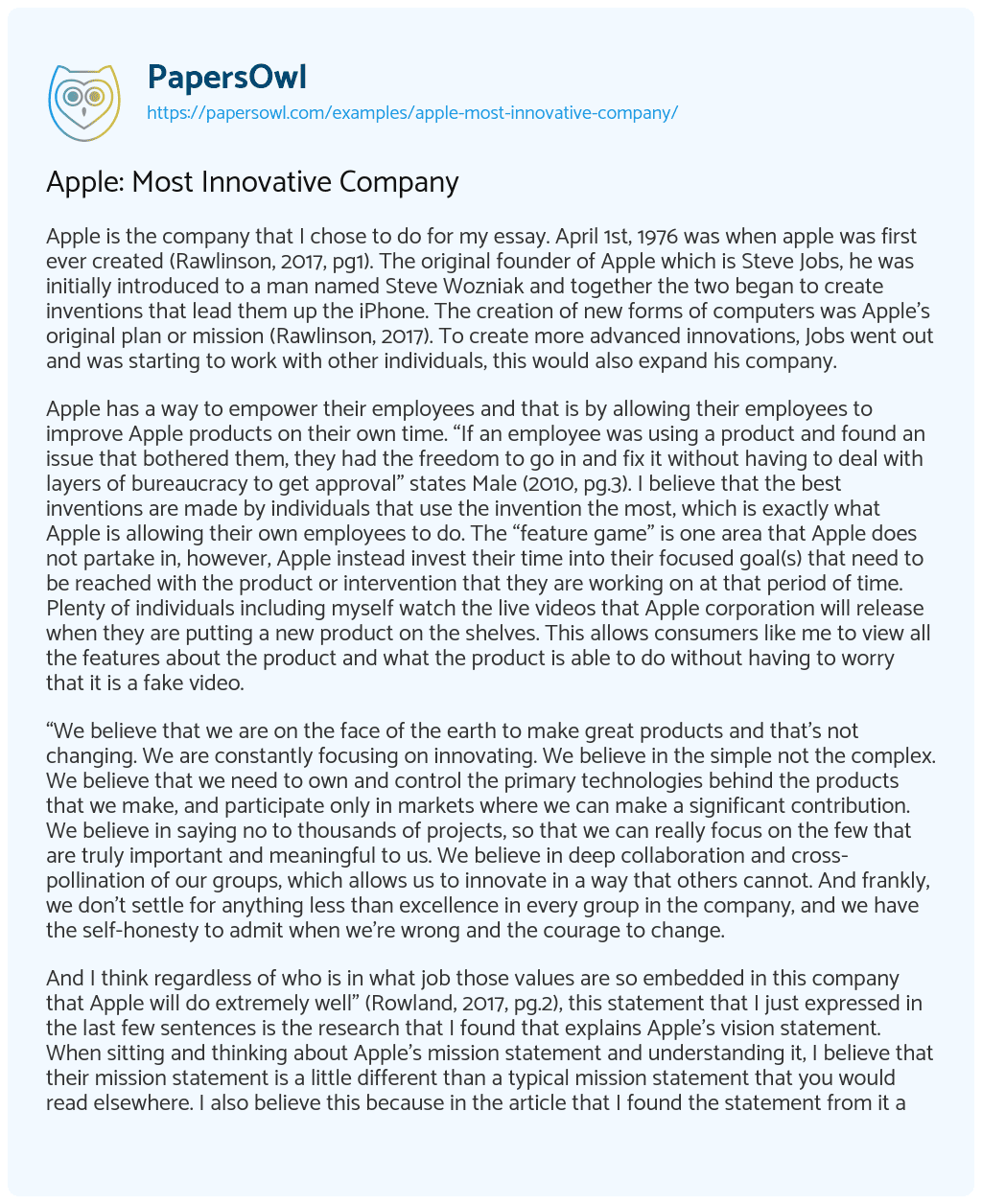 Apple is the company that I chose to do for my essay. April 1st, 1976 was when apple was first ever created (Rawlinson, 2017, pg1). The original founder of Apple which is Steve Jobs, he was initially introduced to a man named Steve Wozniak and together the two began to create inventions that lead them up the iPhone. The creation of new forms of computers was Apple’s original plan or mission (Rawlinson, 2017). To create more advanced innovations, Jobs went out and was starting to work with other individuals, this would also expand his company.

Apple has a way to empower their employees and that is by allowing their employees to improve Apple products on their own time. “If an employee was using a product and found an issue that bothered them, they had the freedom to go in and fix it without having to deal with layers of bureaucracy to get approval” states Male (2010, pg.3). I believe that the best inventions are made by individuals that use the invention the most, which is exactly what Apple is allowing their own employees to do. The “feature game” is one area that Apple does not partake in, however, Apple instead invest their time into their focused goal(s) that need to be reached with the product or intervention that they are working on at that period of time. Plenty of individuals including myself watch the live videos that Apple corporation will release when they are putting a new product on the shelves. This allows consumers like me to view all the features about the product and what the product is able to do without having to worry that it is a fake video.

“We believe that we are on the face of the earth to make great products and that’s not changing. We are constantly focusing on innovating. We believe in the simple not the complex. We believe that we need to own and control the primary technologies behind the products that we make, and participate only in markets where we can make a significant contribution. We believe in saying no to thousands of projects, so that we can really focus on the few that are truly important and meaningful to us. We believe in deep collaboration and cross-pollination of our groups, which allows us to innovate in a way that others cannot. And frankly, we don’t settle for anything less than excellence in every group in the company, and we have the self-honesty to admit when we’re wrong and the courage to change.

And I think regardless of who is in what job those values are so embedded in this company that Apple will do extremely well” (Rowland, 2017, pg.2), this statement that I just expressed in the last few sentences is the research that I found that explains Apple’s vision statement. When sitting and thinking about Apple’s mission statement and understanding it, I believe that their mission statement is a little different than a typical mission statement that you would read elsewhere. I also believe this because in the article that I found the statement from it also states that “Apple designs Macs, the best personal computers in the world, along with OS X, iLife, Iwork and professional software’s. Apple leads the digital music revolution with its iPods and iTunes online store. Apple has reinvented the mobile phone with its revolutionary iPhone and App store, and is defending future of mobile media and computing devices with iPad” (Rowlands, 2017, pg. 3,4).

About the Company Apple Inc.