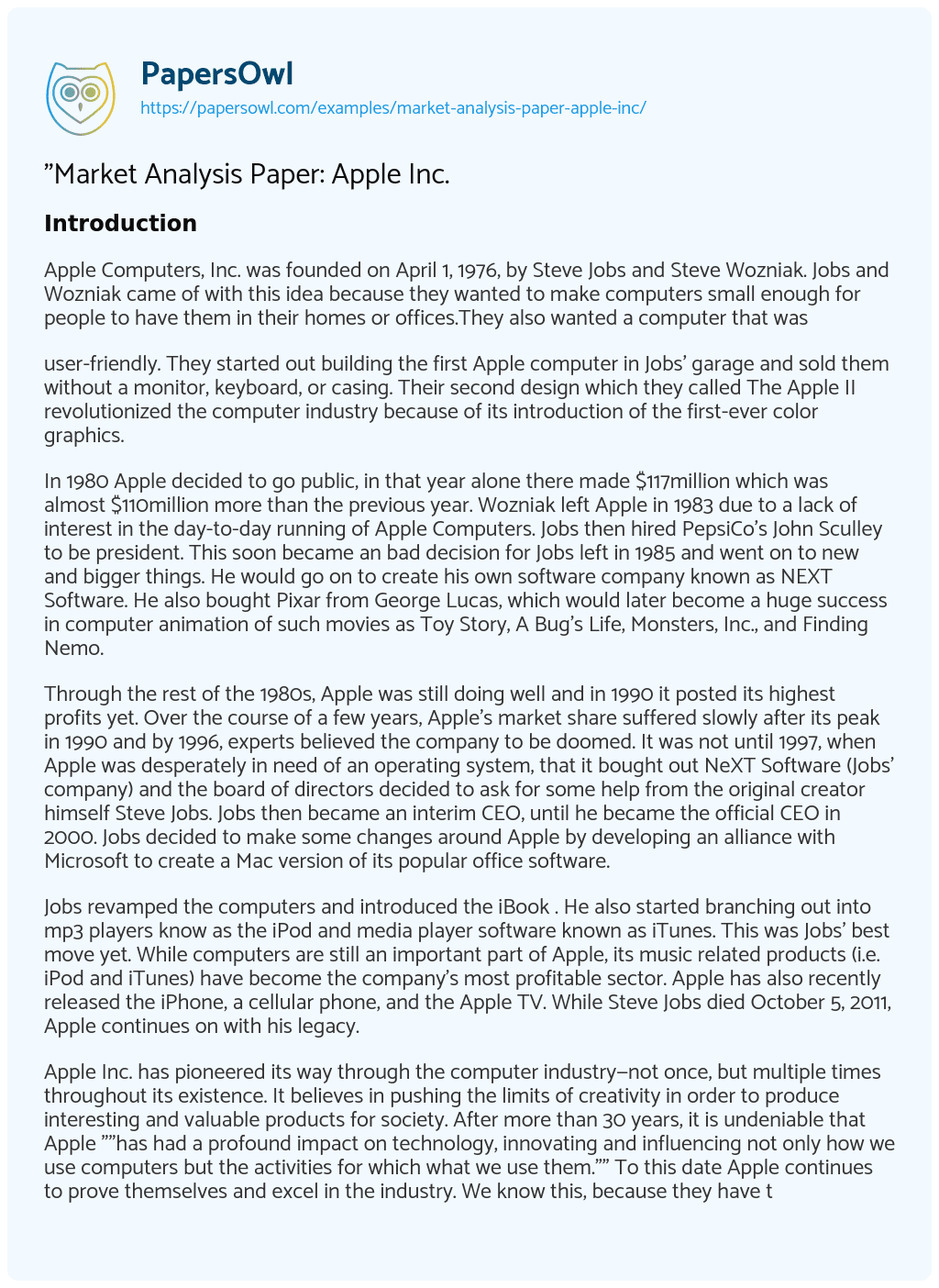 Apple Computers, Inc. was founded on April 1, 1976, by Steve Jobs and Steve Wozniak. Jobs and Wozniak came of with this idea because they wanted to make computers small enough for people to have them in their homes or offices.They also wanted a computer that was

user-friendly. They started out building the first Apple computer in Jobs’ garage and sold them without a monitor, keyboard, or casing. Their second design which they called The Apple II revolutionized the computer industry because of its introduction of the first-ever color graphics.

In 1980 Apple decided to go public, in that year alone there made $117million which was almost $110million more than the previous year. Wozniak left Apple in 1983 due to a lack of interest in the day-to-day running of Apple Computers. Jobs then hired PepsiCo’s John Sculley to be president. This soon became an bad decision for Jobs left in 1985 and went on to new and bigger things. He would go on to create his own software company known as NEXT Software. He also bought Pixar from George Lucas, which would later become a huge success in computer animation of such movies as Toy Story, A Bug’s Life, Monsters, Inc., and Finding Nemo.

Through the rest of the 1980s, Apple was still doing well and in 1990 it posted its highest profits yet. Over the course of a few years, Apple’s market share suffered slowly after its peak in 1990 and by 1996, experts believed the company to be doomed. It was not until 1997, when Apple was desperately in need of an operating system, that it bought out NeXT Software (Jobs’ company) and the board of directors decided to ask for some help from the original creator himself Steve Jobs. Jobs then became an interim CEO, until he became the official CEO in 2000. Jobs decided to make some changes around Apple by developing an alliance with Microsoft to create a Mac version of its popular office software.

Jobs revamped the computers and introduced the iBook . He also started branching out into mp3 players know as the iPod and media player software known as iTunes. This was Jobs’ best move yet. While computers are still an important part of Apple, its music related products (i.e. iPod and iTunes) have become the company’s most profitable sector. Apple has also recently released the iPhone, a cellular phone, and the Apple TV. While Steve Jobs died October 5, 2011, Apple continues on with his legacy.

Apple Inc. has pioneered its way through the computer industry—not once, but multiple times throughout its existence. It believes in pushing the limits of creativity in order to produce interesting and valuable products for society. After more than 30 years, it is undeniable that Apple “”has had a profound impact on technology, innovating and influencing not only how we use computers but the activities for which what we use them.”” To this date Apple continues to prove themselves and excel in the industry. We know this, because they have the numbers to prove it. Just within the last three years Apple has seen a growth of sales by 16.29%. According to Market Watch In 2016, Apple hit a record 214 billion dollars in sales/revenue. They would continue to grow in 2017 earning 228 billion dollars in sales/revenue, and in 2018 reach an all time high at 265 billion dollars in sales/revenue. In the recent years the major bulk of their revenue comes through the sales of their iphones and mobile devices. Considering the growth and success they have seen these past few years. I project they they will double what they are making now over the next five to ten years. As long as they continue to create with an innovative edge they will make it.

The definition of a substitute good – a product that satisfies the same basic want as another product. Substitute goods may be used in place of one another (Example: Coca Cola and Pepsi). If the price of product A (Coca Cola) increases consumers could substitute it for product B (Pepsi).

Each of the companies below offer a multitude of Apple product substitutes.

Most of Apple’s substitutes are cheaper, and offer similar functionality and form. Though for many consumers there is a big difference in brand loyalty. Apple is a trusted and valued brand. Apple has a loyal consumer base that does not consider there to be any substitutes for its products. This is what keeps Apple at the helm of the technological industry.

The definition of a complementary good – a product that is used or consumed jointly with another product (Example: Peanut Butter and Grape Jelly). If the price of product A (Peanut Butter) increases, consumers will likely buy less of product B (Grape Jelly).

The price elasticities of demand measures the responsiveness of the quantity demanded of a particular good or service to change in its demand when nothing but the price changes. Not all goods are valued the same, hence they do not have the same elasticity of demand for their products. Apple has become one of those companies where price of their products does not particularly affect the public’s demand. Over the last 12 years the price of their products have not affected the demand for their goods. As you can see in the chart below.

Apples management has focused on a few standards that has helped them maintain their demand elasticity and establish them as one of the top producers of computers and smartphones:

Apple’s management and designers have created a line of products that many people can not seem to live without. There are many reasons their products resonate with their loyal customers. They a great design and use high grade material, they have worldwide distribution, they are top notch customer service and accessibility with their numerous Apple Stores. The also have innovative software and operating systems. Also, one of the most important reasons is that they have an ecosystem effect, all of their products work together and complement each other, thus adding value to all of the products.

What would you recommend to promote sales?

[image: ]Lets start out by saying the Apple is doing pretty well with sales in all areas considering the economy restrains like trade tensions in China. With that said, it does not mean that there is no room for improvement. While the apple products such as iphones are considered inelastic, there is still a great opportunity to gain more customers by reducing prices, innovations, and maybe even being transparent with customers. For Instance, apple has increased iphone prices in recent years which has caused their their sales to flatten. In order for the company to regain its momentum, Apple has to consider other alternatives in order to promote more sales.

The price and features of the iphone are the first examples of how Apple can really promote their existing products. Even though the company has pushed the prices on their phones, there are customers who are pushing back. Considering the price for the newest iphone addition ranges from $999 to $1,499, Apple really has to focus on how much more money customers are willing to spend. In order for the company to rise its sales again, the company has to be willing to consider price reduction. The company could potentially give phone carriers more access to phone discounts in order to attract more customers and allow for existing ones to upgrade.

The concerns with short lasting battery and slowing processors should also be addressed. These issues have tinted Apple’s image which have caused customers backlash. While the company can

regain sales by reducing price, a tinted image can be harder to come back from. In order to do so, the company has to become more transparent with their products and business practices.

Lastly, we touched on competitors who are also trying to be on top of the technological era. Apple Inc. at this point in time is considered to be both an oligopoly and a monopolistic competition because of innovative advantage and amount of competition. Apple’s tough entry barrier has allowed them to stay on top of the market but with competitors slowly catching up, it might become a little harder for the company to keep up.

In order to stay ahead of the competition, Apple has to stay innovative but affordable. For instance, competitors like Samsung are constantly integrating new technologies into their products at a more reasonable price. In the chart below are some recommendations that Apple can do that are not costly but will give them the push they need.