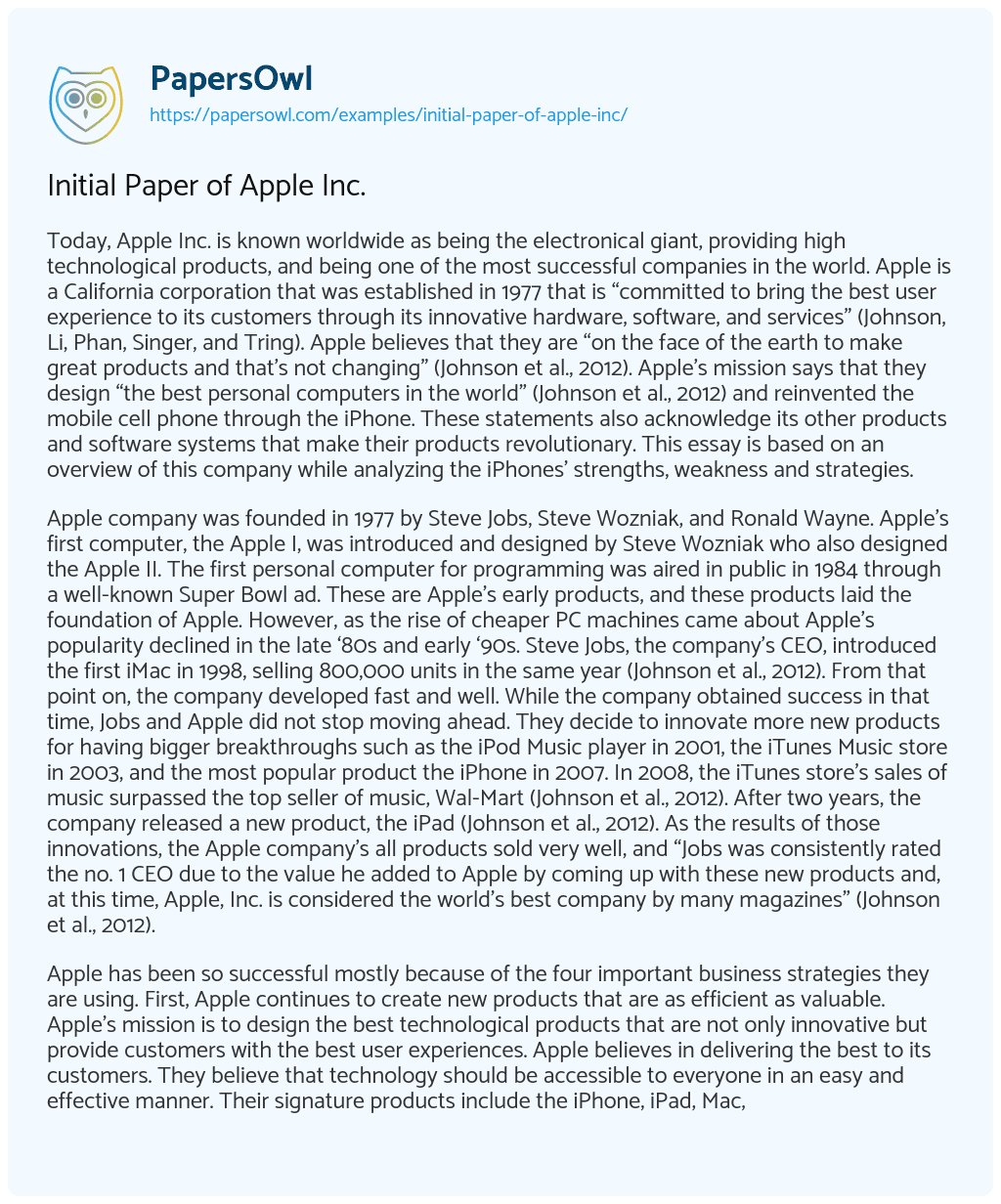 Today, Apple Inc. is known worldwide as being the electronical giant, providing high technological products, and being one of the most successful companies in the world. Apple is a California corporation that was established in 1977 that is “committed to bring the best user experience to its customers through its innovative hardware, software, and services” (Johnson, Li, Phan, Singer, and Tring). Apple believes that they are “on the face of the earth to make great products and that’s not changing” (Johnson et al., 2012). Apple’s mission says that they design “the best personal computers in the world” (Johnson et al., 2012) and reinvented the mobile cell phone through the iPhone. These statements also acknowledge its other products and software systems that make their products revolutionary. This essay is based on an overview of this company while analyzing the iPhones’ strengths, weakness and strategies.

Apple company was founded in 1977 by Steve Jobs, Steve Wozniak, and Ronald Wayne. Apple’s first computer, the Apple I, was introduced and designed by Steve Wozniak who also designed the Apple II. The first personal computer for programming was aired in public in 1984 through a well-known Super Bowl ad. These are Apple’s early products, and these products laid the foundation of Apple. However, as the rise of cheaper PC machines came about Apple’s popularity declined in the late ‘80s and early ‘90s. Steve Jobs, the company’s CEO, introduced the first iMac in 1998, selling 800,000 units in the same year (Johnson et al., 2012). From that point on, the company developed fast and well. While the company obtained success in that time, Jobs and Apple did not stop moving ahead. They decide to innovate more new products for having bigger breakthroughs such as the iPod Music player in 2001, the iTunes Music store in 2003, and the most popular product the iPhone in 2007. In 2008, the iTunes store’s sales of music surpassed the top seller of music, Wal-Mart (Johnson et al., 2012). After two years, the company released a new product, the iPad (Johnson et al., 2012). As the results of those innovations, the Apple company’s all products sold very well, and “Jobs was consistently rated the no. 1 CEO due to the value he added to Apple by coming up with these new products and, at this time, Apple, Inc. is considered the world’s best company by many magazines” (Johnson et al., 2012).

Apple has been so successful mostly because of the four important business strategies they are using. First, Apple continues to create new products that are as efficient as valuable. Apple’s mission is to design the best technological products that are not only innovative but provide customers with the best user experiences. Apple believes in delivering the best to its customers. They believe that technology should be accessible to everyone in an easy and effective manner. Their signature products include the iPhone, iPad, Mac, MacBook, Apple Watch, Airpods, and software such as iOS, and other forms of corporate and professional medias. They continue to create their products to pair with their main computing devices such as the Apple watch and Airpods that add a revolutionary spin on their existing devices. Second, the Apple company always keeps their products’ outlook and operating system forefront of the times. Apple’s vision is to create the best and most innovative devices whilst remaining simplistic and making their products easy to navigate and very user-friendly. Apple believes in the simple not complex which allows them to innovate and create products extremely well. Third, Apple has a strong brand image, name recognition, and experience centers all over the world. Apple’s logo is everywhere when its new products comes out. People can see Apple’s conspicuous image on social-medias, on TVs, on websites, and on advertisements of telecommunications company such as AT&T, Verizon, and T-Mobile. Last, Apple has a large sale networking. The company sells its products worldwide through its retail stores, online stores and direct sales force, as well as through third-party cellular network carriers, wholesalers, retailers and resellers (Apple Inc., 10K form 2018). As of 2019, Apple Inc. is distributed in 25 countries all around the world, including the U.S., and their retail stores in 45 states out of 50 states.

Apple has a wide range of products, but its iPhones have consistently outsold other Apple products. Since the introduction of the iPhone in June 2007, sales of the iPhone have increased rapidly from 1.12 million units in the third quarter of 2017 to 46.89 million units in the third quarter of 2018 worldwide. In contrast, sales of the iPod have dramatically decreased from 14.04 million units in the fourth quarter of 2006 to 2.64 million units in the first quarter of 2015 (Statista, 2019). The original purpose Apple created the iPhone was because Apple wanted to design new and technological mobile phones that were more convenient and innovative. Therefore, on January 9, 2017, the first iPhone with a touch-screen was introduced by Jobs. Then Apple released the iPhone 4s with the addition of a voice-activated personal assistant called Siri. With continuous updates, Apple released the iPhone X with facial recognition in November 2017. In 2018, Apple released three versions of the iPhone: iPhone Xs, iPhone Xs Max, and iPhone XR, with a better sensor and an image processor. Because iPhones have high quality and well-developed technology, iPhones have been the most popular phone all over the world, and it brought high revenues to Apple Inc. in 2018. Apple’s financial report in 2018 shows that the revenue iPhones bring in is between $60 billion and $62 billion in the first quarter, more than half Apple’s total revenue of $88 billion which includes all of Apple products: iPhone, iPad, Mac, services, and other products, such as Airpods (Apple Inc financial report, 2018).

There are three strengths of iPhones. First, Apple has a strong brand image that is simple and well-marketed, so iPhones benefit greatly from this. Part of what makes Apple so successful is the success of its brand design, and they also spend lot of money to advertise their brand that make customers unable to forget Apple. Another strength of iPhones is that they provide high profit margins due to being priced over $600. Apple’s ability to continuously grow and innovative give its iPhones an advantage that makes it difficult for its competitors to create a similar product in a timely manner which gives Apple a monopoly over this product. The third strength of iPhones is their high technology and usability. Take an example of iPhone X, which is the first iPhone to use organic light-emitting diode (OLED) screen technology, as well as wireless charging and facial recognition technology to unlock the phone.

There are three weaknesses of the iPhone. One of iPhone’s weaknesses is their high prices point. Their high prices point narrows down the group of people to those who are willing and able to pay the high prices for iPhones, which limits Apple’ customer market. For example, the cheapest of Apple’s three newest iPhones is the iPhone XR, which costs $749 on the official website, while the most expensive iPhone Xs Max costs $1499. In the market, the price of iPhones is much higher than most other brands. Another weakness of iPhones is that many of their accessories are only compatible with Apple products, such as Apple’s Airpods which only work best with the iPhone, as well as iPhone’s wireless chargers. Therefore, customers who do not want to purchase other Apple’s products might not purchase iPhones. The biggest weakness of the iPhone is whether or not the market will accept every new released iPhone. iPhone customers have such high expectations for each iPhone that is released because of their high prices.

While iPhones have been a huge success over the past few years, sales of the company’s three newest iPhones: iPhone Xs, iPhone Xs Max, and iPhone Xr are declining. The three versions of iPhone did make a large revenue in 2018, however, the reason for they made a good revenue is not because the units of sale are increasing, but due to the highest prices ever. According to an article, “[the] company may have missed sales estimates, but more expensive iPhone models are driving profit higher than ever” (Haselton, 2018). In other words, the newest three versions of iPhone’s units of sale are not very positive since 2018, but the three versions of iPhone’s expensive prices boosted Apple’s revenue. One statistic also shows that iPhone’s units sales peaked 231.22 million in 2015 but have been declining every year since 2015 (Statista,2019). The information largely reflects some of the tech giant’s hidden threats. One is the threat of imitation by aggressive competitors like Google, Samsung, and Microsoft. Another threat is that iPhones’ innovation and creativities are not as special as people have seen before. The most important threat is that all Apple’s products, especially iPhones, are priced out of the acceptable reach of most customers, are Apple’s products on the road of luxury or technology? With the rapid development of technology, many smart phones have caught up with and surpassed the technology of the iPhone, but the prices of these smart phones are more reasonable.

To sum up, as one of the biggest technological companies worldwide, Apple’ s achievements are unprecedented. Apple’s excellent strategies and great products are the best proof of being a successful company. However, as the speed of this era keeps moving on, Apple needs to solve their many problems such as high price, competitive market environments and slow innovations and lack of creativities as soon as possible. In order to catch up the fast pace of technology world, Apple should focus more on expanding their innovations, not expanding their revenue.