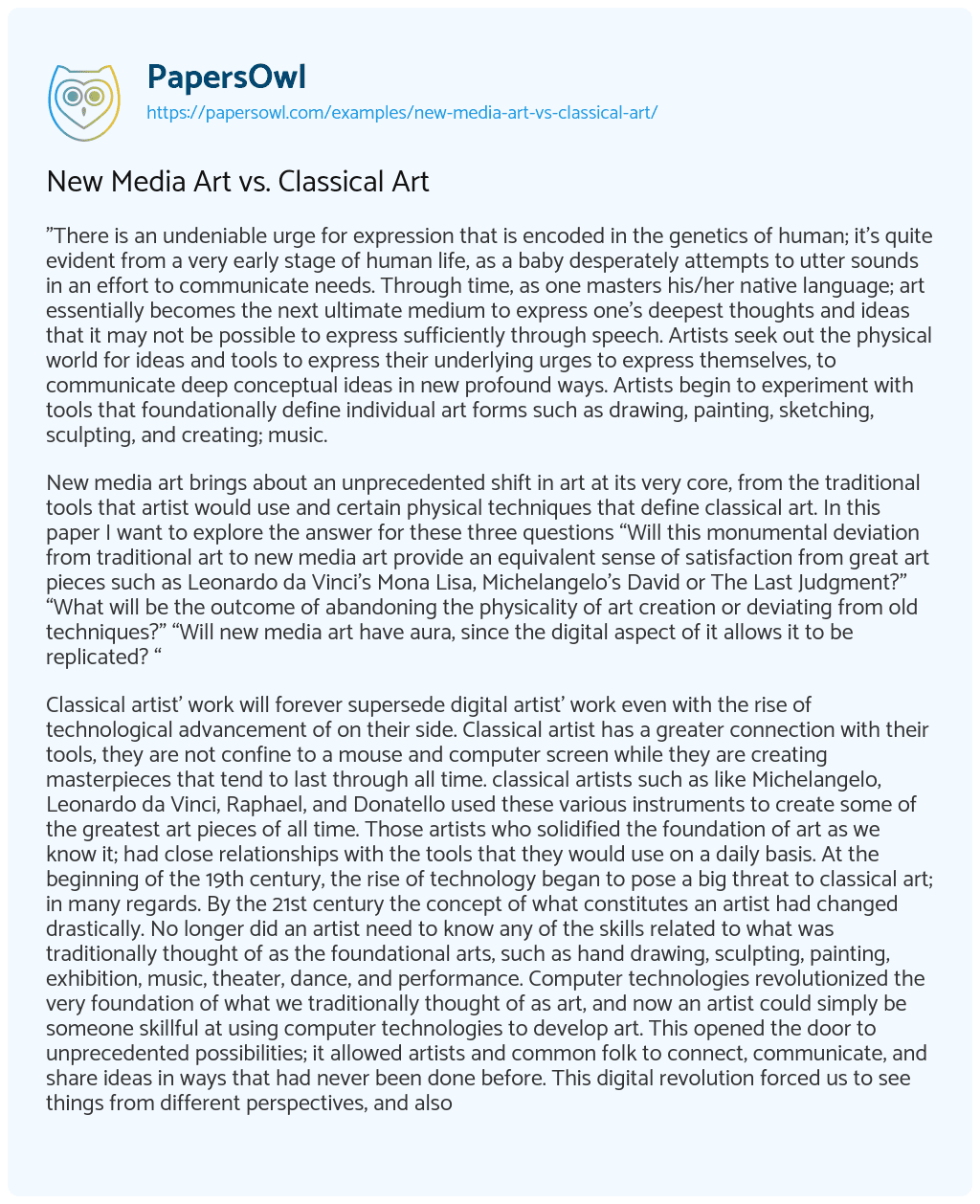 “There is an undeniable urge for expression that is encoded in the genetics of human; it’s quite evident from a very early stage of human life, as a baby desperately attempts to utter sounds in an effort to communicate needs. Through time, as one masters his/her native language; art essentially becomes the next ultimate medium to express one’s deepest thoughts and ideas that it may not be possible to express sufficiently through speech. Artists seek out the physical world for ideas and tools to express their underlying urges to express themselves, to communicate deep conceptual ideas in new profound ways. Artists begin to experiment with tools that foundationally define individual art forms such as drawing, painting, sketching, sculpting, and creating; music.

New media art brings about an unprecedented shift in art at its very core, from the traditional tools that artist would use and certain physical techniques that define classical art. In this paper I want to explore the answer for these three questions “Will this monumental deviation from traditional art to new media art provide an equivalent sense of satisfaction from great art pieces such as Leonardo da Vinci’s Mona Lisa, Michelangelo’s David or The Last Judgment?” “What will be the outcome of abandoning the physicality of art creation or deviating from old techniques?” “Will new media art have aura, since the digital aspect of it allows it to be replicated? “

Classical artist’ work will forever supersede digital artist’ work even with the rise of technological advancement of on their side. Classical artist has a greater connection with their tools, they are not confine to a mouse and computer screen while they are creating masterpieces that tend to last through all time. classical artists such as like Michelangelo, Leonardo da Vinci, Raphael, and Donatello used these various instruments to create some of the greatest art pieces of all time. Those artists who solidified the foundation of art as we know it; had close relationships with the tools that they would use on a daily basis. At the beginning of the 19th century, the rise of technology began to pose a big threat to classical art; in many regards. By the 21st century the concept of what constitutes an artist had changed drastically. No longer did an artist need to know any of the skills related to what was traditionally thought of as the foundational arts, such as hand drawing, sculpting, painting, exhibition, music, theater, dance, and performance. Computer technologies revolutionized the very foundation of what we traditionally thought of as art, and now an artist could simply be someone skillful at using computer technologies to develop art. This opened the door to unprecedented possibilities; it allowed artists and common folk to connect, communicate, and share ideas in ways that had never been done before. This digital revolution forced us to see things from different perspectives, and also forced us to create new terms; such as communication, video, design, visual art, and performance art. At the same, it steers new artists away from engaging with traditional physical tool that give rise to art as we knows it.

It is true that art is not define or restricted to the specific tool that an artist chooses to use, but understanding the fundamental nature of any given subject, the tools that carve the its very beginning is crucial to mastering that specific field. Let’s take a look at animation for example; no longer does animators or drawing artist have to draw out every single frame that to create the perfect illusion of life that we call animation. They are no longer have spent hours on top of hour, days on top of day or even years just to create a short lengths animation that perfectly reflect the elusion precisely. Now a day with program like Autodesk Maya, Blender, Autodesk 3ds Max, Adobe Animate among many other software programs that are popular today, one can easily utilize those tools to replicate the illusion of motion with instant frames; which essentially knows as animation. As technology becomes more and more advance, fundamental or rational methods of creating animations seem rather archaic or simply irrelevant. Having knowledge of 2d art allows artist to possess a greater appreciation for details and patience that they would’ve attain simply through the use of digital art or animation. With the advancement of technology, the younger generation may think they do not need to be informed about how Muybridge or how he used photography in 1878 to study horses gate in order to understand motion or the illusion of it. I personally think they would be making a big mistake because they are failing to acknowledge the very basis of where animation started.

What Muybridge discover or accomplish remained a stapled in the medium that we know as motion pictures, his experiment was not only unprecedented but also no easy task to set forth in action. For his experiment, he uses 12 different cameras, which took twelve 12 pictures in a rapid succession which reveals a completely new reality of motion/form of horse as they run. The photographic image reveals something that the naked eye failed to see which essentially solidify the vary medium that we know as motion pictures. Muybridge ultimate aims were to find out does a horse become airborne fully when they gallop, that very question gives rise to the twelve principles of animation, the illusion of motion, as we know it. Animator who fails to see the importance of knowing where animation started, the importance of having knowledge/skills in drawing will only be at a disadvantage in a competitive/skills driving environment. I believe that it is imperative that digital artist ought to inform themselves of on the fundamentals of art and animation, for example the magic lantern in 1606, the Thaumatrope in 1824, Phenakistoscope in 1801, the Zoetrope in 1804 and so forth.

There seem to be an undeniable difference between classical art and digital art; having that notion ingrain in our minds can we say that one medium is better or perhaps of more substance than the other. In Benjamin, influential 1936 essay “The Work of Art in the Age of Mechanical Reproduction” he describes something calls Aura, which he states, “in even the perfect reproduction, one thing is lacking: the here and now of the work of art-its uniqueness existence in a particular place” (Benjamin, 1935) Basically what Benjamin was trying to get across is that in the digital age, art can no longer possess aura due to its reproducibility nature. An original painting has a particular essence that it exudes that digital art fails to embody. Classical art exudes a sense of authenticity, originality, rarity, it exists in a time and space, where as digital art tends to lose its value as it pertain its reproducibility nature which allows to printed/possess by given individual.

there is a great saying that goes” before you can break the rules you first have to master them.” Similarly, I believe when a digital artist fails to acknowledge the tools and knowledge used by classical artist that has master the and define art itself they are putting the cart before the horse. Classical art will forever remain the foundation of where art begins, failing to acknowledge that fact will further deviate digital artist’ work from mastery. There is an undeniable distinction between classical art and digital art but the big question will digital art ever amount the same degree of satisfaction and have the same “aura” for viewers despite abandoning the links to what we associate with as classic art forms?”

Comparison between the Studio and Artistic Animated Films