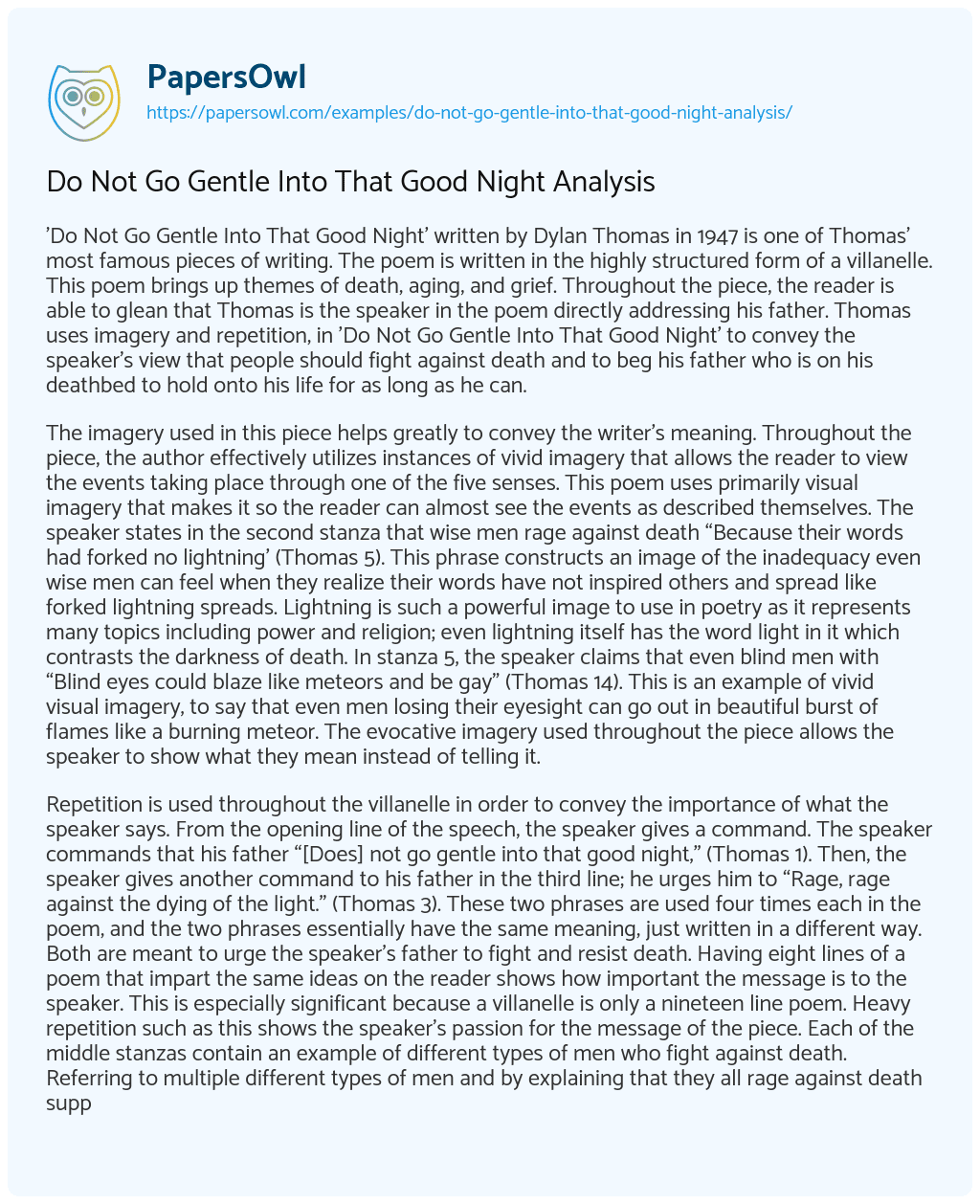 ‘Do Not Go Gentle Into That Good Night’ written by Dylan Thomas in 1947 is one of Thomas’ most famous pieces of writing. The poem is written in the highly structured form of a villanelle. This poem brings up themes of death, aging, and grief. Throughout the piece, the reader is able to glean that Thomas is the speaker in the poem directly addressing his father. Thomas uses imagery and repetition, in ‘Do Not Go Gentle Into That Good Night’ to convey the speaker’s view that people should fight against death and to beg his father who is on his deathbed to hold onto his life for as long as he can.

The imagery used in this piece helps greatly to convey the writer’s meaning. Throughout the piece, the author effectively utilizes instances of vivid imagery that allows the reader to view the events taking place through one of the five senses. This poem uses primarily visual imagery that makes it so the reader can almost see the events as described themselves. The speaker states in the second stanza that wise men rage against death “Because their words had forked no lightning’ (Thomas 5). This phrase constructs an image of the inadequacy even wise men can feel when they realize their words have not inspired others and spread like forked lightning spreads. Lightning is such a powerful image to use in poetry as it represents many topics including power and religion; even lightning itself has the word light in it which contrasts the darkness of death. In stanza 5, the speaker claims that even blind men with “Blind eyes could blaze like meteors and be gay” (Thomas 14). This is an example of vivid visual imagery, to say that even men losing their eyesight can go out in beautiful burst of flames like a burning meteor. The evocative imagery used throughout the piece allows the speaker to show what they mean instead of telling it.

Repetition is used throughout the villanelle in order to convey the importance of what the speaker says. From the opening line of the speech, the speaker gives a command. The speaker commands that his father “[Does] not go gentle into that good night,” (Thomas 1). Then, the speaker gives another command to his father in the third line; he urges him to “Rage, rage against the dying of the light.” (Thomas 3). These two phrases are used four times each in the poem, and the two phrases essentially have the same meaning, just written in a different way. Both are meant to urge the speaker’s father to fight and resist death. Having eight lines of a poem that impart the same ideas on the reader shows how important the message is to the speaker. This is especially significant because a villanelle is only a nineteen line poem. Heavy repetition such as this shows the speaker’s passion for the message of the piece. Each of the middle stanzas contain an example of different types of men who fight against death. Referring to multiple different types of men and by explaining that they all rage against death supports the speakers urge for his father to keep fighting. By repeating their ideas several times, the speaker makes the main idea of the poem clearer and more memorable for the reader.

Throughout ‘Do Not Go Gentle Into That Good Night,’ Thomas uses imagery and repetition to convey the speaker’s pleading with his dying father to hold onto his life and fight for as long as he can. Powerful imagery within the poem creates images in the reader’s mind of how the speaker positively views fighting against death. Heavy repetition emphasizes how important raging against death is to the speaker. The use of these literary devices help to explain the immense amount of grief and pure emotion the speaker is feeling while watching his father die.

Do Not Go Gentle Into That Good Night Analysis. (2021, Mar 27). Retrieved from https://papersowl.com/examples/do-not-go-gentle-into-that-good-night-analysis/

Paralels with Death of a Salesman