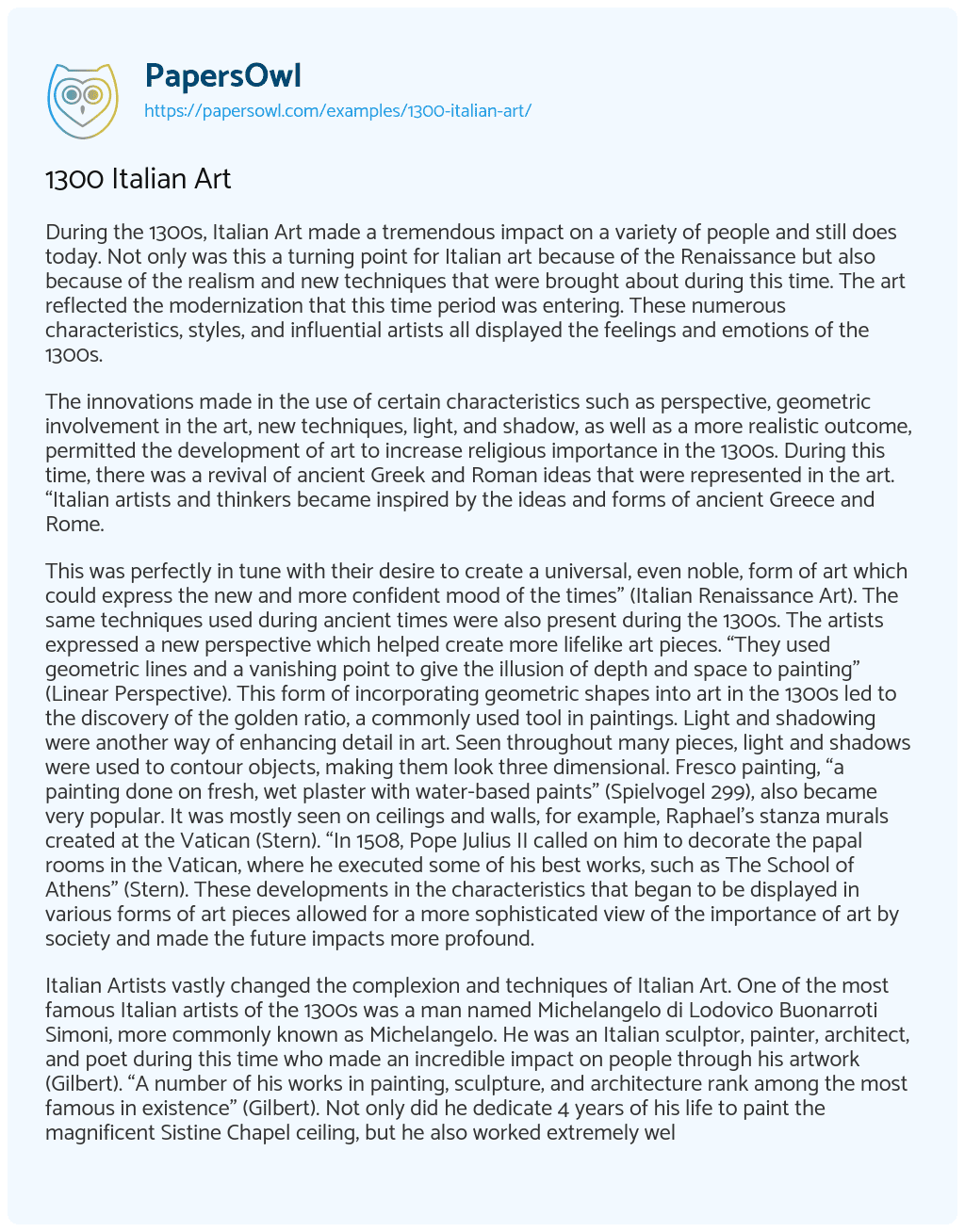 During the 1300s, Italian Art made a tremendous impact on a variety of people and still does today. Not only was this a turning point for Italian art because of the Renaissance but also because of the realism and new techniques that were brought about during this time. The art reflected the modernization that this time period was entering. These numerous characteristics, styles, and influential artists all displayed the feelings and emotions of the 1300s.

The innovations made in the use of certain characteristics such as perspective, geometric involvement in the art, new techniques, light, and shadow, as well as a more realistic outcome, permitted the development of art to increase religious importance in the 1300s. During this time, there was a revival of ancient Greek and Roman ideas that were represented in the art. “Italian artists and thinkers became inspired by the ideas and forms of ancient Greece and Rome.

This was perfectly in tune with their desire to create a universal, even noble, form of art which could express the new and more confident mood of the times” (Italian Renaissance Art). The same techniques used during ancient times were also present during the 1300s. The artists expressed a new perspective which helped create more lifelike art pieces. “They used geometric lines and a vanishing point to give the illusion of depth and space to painting” (Linear Perspective). This form of incorporating geometric shapes into art in the 1300s led to the discovery of the golden ratio, a commonly used tool in paintings. Light and shadowing were another way of enhancing detail in art. Seen throughout many pieces, light and shadows were used to contour objects, making them look three dimensional. Fresco painting, “a painting done on fresh, wet plaster with water-based paints” (Spielvogel 299), also became very popular. It was mostly seen on ceilings and walls, for example, Raphael’s stanza murals created at the Vatican (Stern). “In 1508, Pope Julius II called on him to decorate the papal rooms in the Vatican, where he executed some of his best works, such as The School of Athens” (Stern). These developments in the characteristics that began to be displayed in various forms of art pieces allowed for a more sophisticated view of the importance of art by society and made the future impacts more profound.

Italian Artists vastly changed the complexion and techniques of Italian Art. One of the most famous Italian artists of the 1300s was a man named Michelangelo di Lodovico Buonarroti Simoni, more commonly known as Michelangelo. He was an Italian sculptor, painter, architect, and poet during this time who made an incredible impact on people through his artwork (Gilbert). “A number of his works in painting, sculpture, and architecture rank among the most famous in existence” (Gilbert). Not only did he dedicate 4 years of his life to paint the magnificent Sistine Chapel ceiling, but he also worked extremely well with marble. One of his most famous sculptures is the statue of David which shows the great detail and hard work Michelangelo put into creating such an outstanding sculpture. Another well-known artist of the 1300s was Leonardo da Vinci. Like Michelangelo, Da Vinci’s talents included sculpting, painting, and drawing.

“He is admired for his virtuosity as a painter and draughtsman in the handling of space, depiction of light and shadow, and uses tones and colors to shade which produces gradually into softened outlines” (Leonardo Da Vinci). One of his most famous paintings is the Mona Lisa which is an oil painting depicting a woman who expresses a form of humanity that is rarely seen in art. “It was painted sometime between 1503 and 1519 when Leonardo was living in Florence, and it now hangs in the Louvre Museum, in Paris, where it remained an object of pilgrimage in the 21st century” (Mona Lisa). The Mona Lisa is such a famous and acknowledged painting because of its relatively odd appearance that it portrays (Mona Lisa). Most people argue that the Mona Lisa could be a man or woman due to the slight masculine features that this portrait embodies. This painting that Da Vinci constructed influenced other artists to compose a more free technique used in their paintings. Overall, these two insanely phenomenal artists render the brilliance and time well spent in their artworks during the 1300s.

1300s Italian art greatly influenced our world and culture due to the styles, characteristics, and artists. Two of the most famous, Leonardo da Vinci and Michelangelo, created a multitude of compelling and substantial artworks in Italy. Through their work, they included many characteristics like a more realistic, defined, and detailed craftsmanship. Since the 1300s, the quality and complexity of art dramatically changed, which affected the level of skill portrayed in art today.