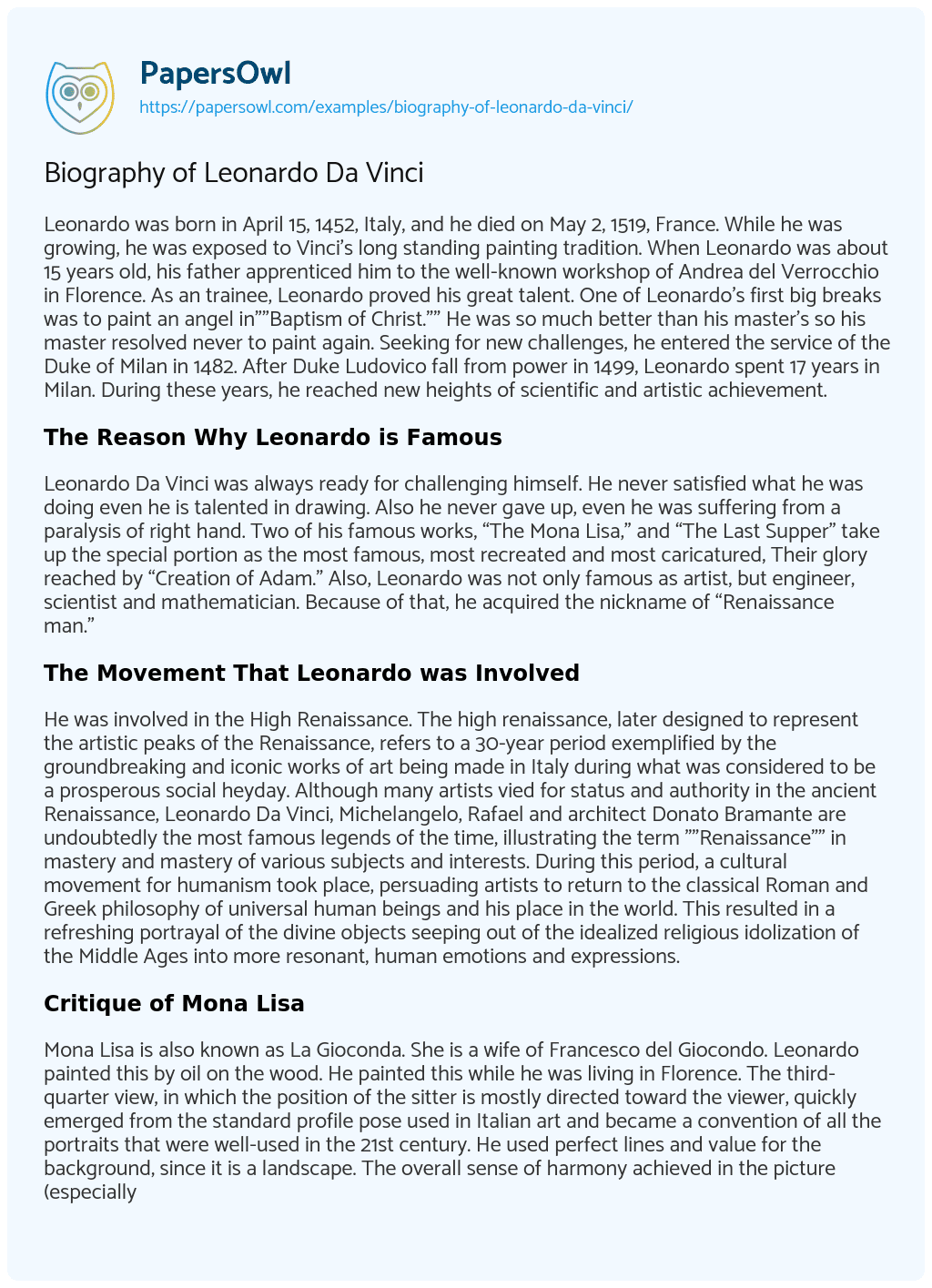 Leonardo was born in April 15, 1452, Italy, and he died on May 2, 1519, France. While he was growing, he was exposed to Vinci’s long standing painting tradition. When Leonardo was about 15 years old, his father apprenticed him to the well-known workshop of Andrea del Verrocchio in Florence. As an trainee, Leonardo proved his great talent. One of Leonardo’s first big breaks was to paint an angel in””Baptism of Christ.”” He was so much better than his master’s so his master resolved never to paint again. Seeking for new challenges, he entered the service of the Duke of Milan in 1482. After Duke Ludovico fall from power in 1499, Leonardo spent 17 years in Milan. During these years, he reached new heights of scientific and artistic achievement.

The Reason Why Leonardo is Famous

Leonardo Da Vinci was always ready for challenging himself. He never satisfied what he was doing even he is talented in drawing. Also he never gave up, even he was suffering from a paralysis of right hand. Two of his famous works, “The Mona Lisa,” and “The Last Supper” take up the special portion as the most famous, most recreated and most caricatured, Their glory reached by “Creation of Adam.” Also, Leonardo was not only famous as artist, but engineer, scientist and mathematician. Because of that, he acquired the nickname of “Renaissance man.”

The Movement That Leonardo was Involved

He was involved in the High Renaissance. The high renaissance, later designed to represent the artistic peaks of the Renaissance, refers to a 30-year period exemplified by the groundbreaking and iconic works of art being made in Italy during what was considered to be a prosperous social heyday. Although many artists vied for status and authority in the ancient Renaissance, Leonardo Da Vinci, Michelangelo, Rafael and architect Donato Bramante are undoubtedly the most famous legends of the time, illustrating the term “”Renaissance”” in mastery and mastery of various subjects and interests. During this period, a cultural movement for humanism took place, persuading artists to return to the classical Roman and Greek philosophy of universal human beings and his place in the world. This resulted in a refreshing portrayal of the divine objects seeping out of the idealized religious idolization of the Middle Ages into more resonant, human emotions and expressions.

Mona Lisa is also known as La Gioconda. She is a wife of Francesco del Giocondo. Leonardo painted this by oil on the wood. He painted this while he was living in Florence. The third-quarter view, in which the position of the sitter is mostly directed toward the viewer, quickly emerged from the standard profile pose used in Italian art and became a convention of all the portraits that were well-used in the 21st century. He used perfect lines and value for the background, since it is a landscape. The overall sense of harmony achieved in the picture (especially evident in the faint smile of the sitter) reflects Leonardo’s idea of a cosmic connection linking man to nature, making this picture a lasting record of Leonardo’s view.