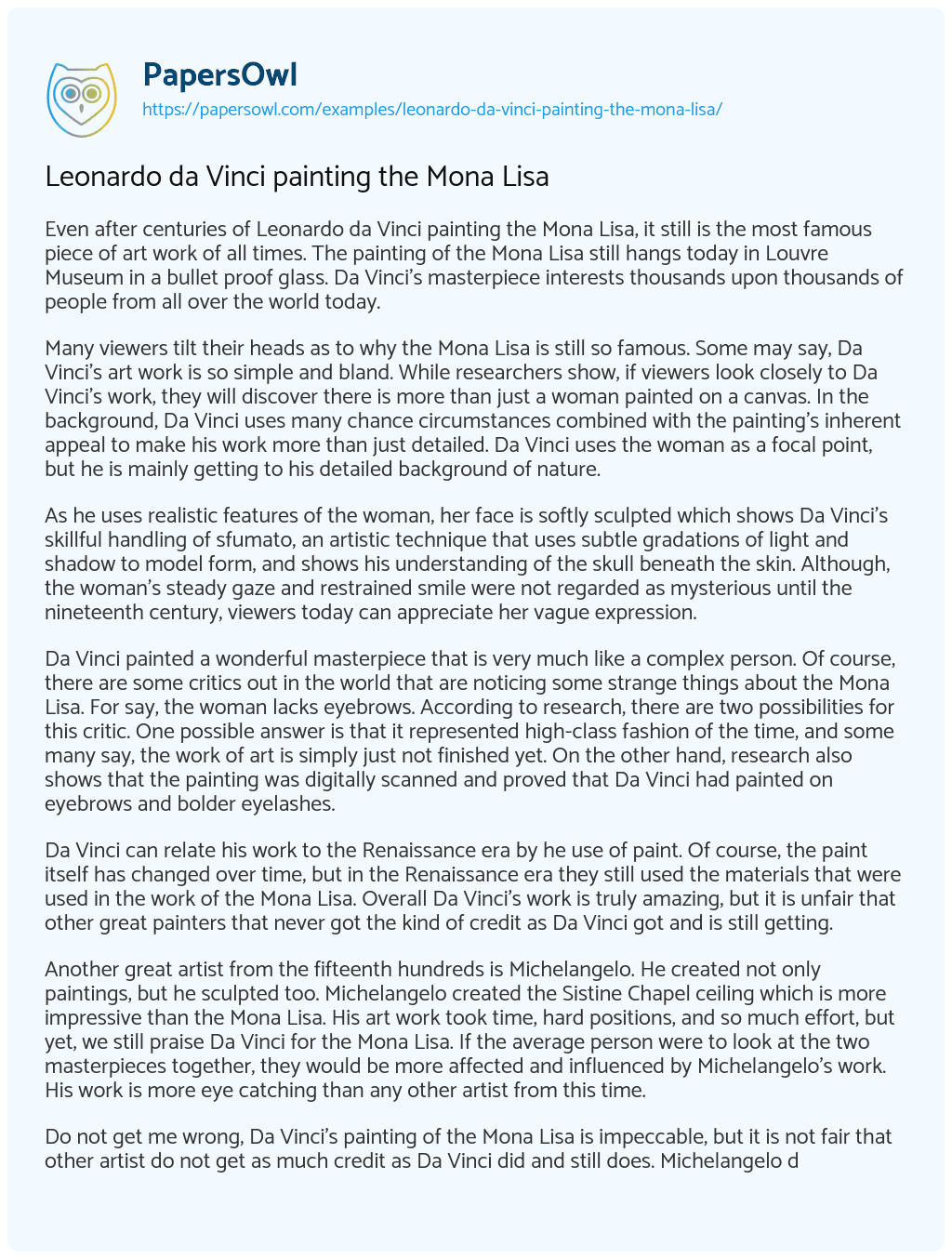 Even after centuries of Leonardo da Vinci painting the Mona Lisa, it still is the most famous piece of art work of all times. The painting of the Mona Lisa still hangs today in Louvre Museum in a bullet proof glass. Da Vinci’s masterpiece interests thousands upon thousands of people from all over the world today.

Many viewers tilt their heads as to why the Mona Lisa is still so famous. Some may say, Da Vinci’s art work is so simple and bland. While researchers show, if viewers look closely to Da Vinci’s work, they will discover there is more than just a woman painted on a canvas. In the background, Da Vinci uses many chance circumstances combined with the painting’s inherent appeal to make his work more than just detailed. Da Vinci uses the woman as a focal point, but he is mainly getting to his detailed background of nature.

As he uses realistic features of the woman, her face is softly sculpted which shows Da Vinci’s skillful handling of sfumato, an artistic technique that uses subtle gradations of light and shadow to model form, and shows his understanding of the skull beneath the skin. Although, the woman’s steady gaze and restrained smile were not regarded as mysterious until the nineteenth century, viewers today can appreciate her vague expression.

Da Vinci painted a wonderful masterpiece that is very much like a complex person. Of course, there are some critics out in the world that are noticing some strange things about the Mona Lisa. For say, the woman lacks eyebrows. According to research, there are two possibilities for this critic. One possible answer is that it represented high-class fashion of the time, and some many say, the work of art is simply just not finished yet. On the other hand, research also shows that the painting was digitally scanned and proved that Da Vinci had painted on eyebrows and bolder eyelashes.

Da Vinci can relate his work to the Renaissance era by he use of paint. Of course, the paint itself has changed over time, but in the Renaissance era they still used the materials that were used in the work of the Mona Lisa. Overall Da Vinci’s work is truly amazing, but it is unfair that other great painters that never got the kind of credit as Da Vinci got and is still getting.

Another great artist from the fifteenth hundreds is Michelangelo. He created not only paintings, but he sculpted too. Michelangelo created the Sistine Chapel ceiling which is more impressive than the Mona Lisa. His art work took time, hard positions, and so much effort, but yet, we still praise Da Vinci for the Mona Lisa. If the average person were to look at the two masterpieces together, they would be more affected and influenced by Michelangelo’s work. His work is more eye catching than any other artist from this time.

Do not get me wrong, Da Vinci’s painting of the Mona Lisa is impeccable, but it is not fair that other artist do not get as much credit as Da Vinci did and still does. Michelangelo did just as well as Da Vinci did when it comes to creating masterpieces.