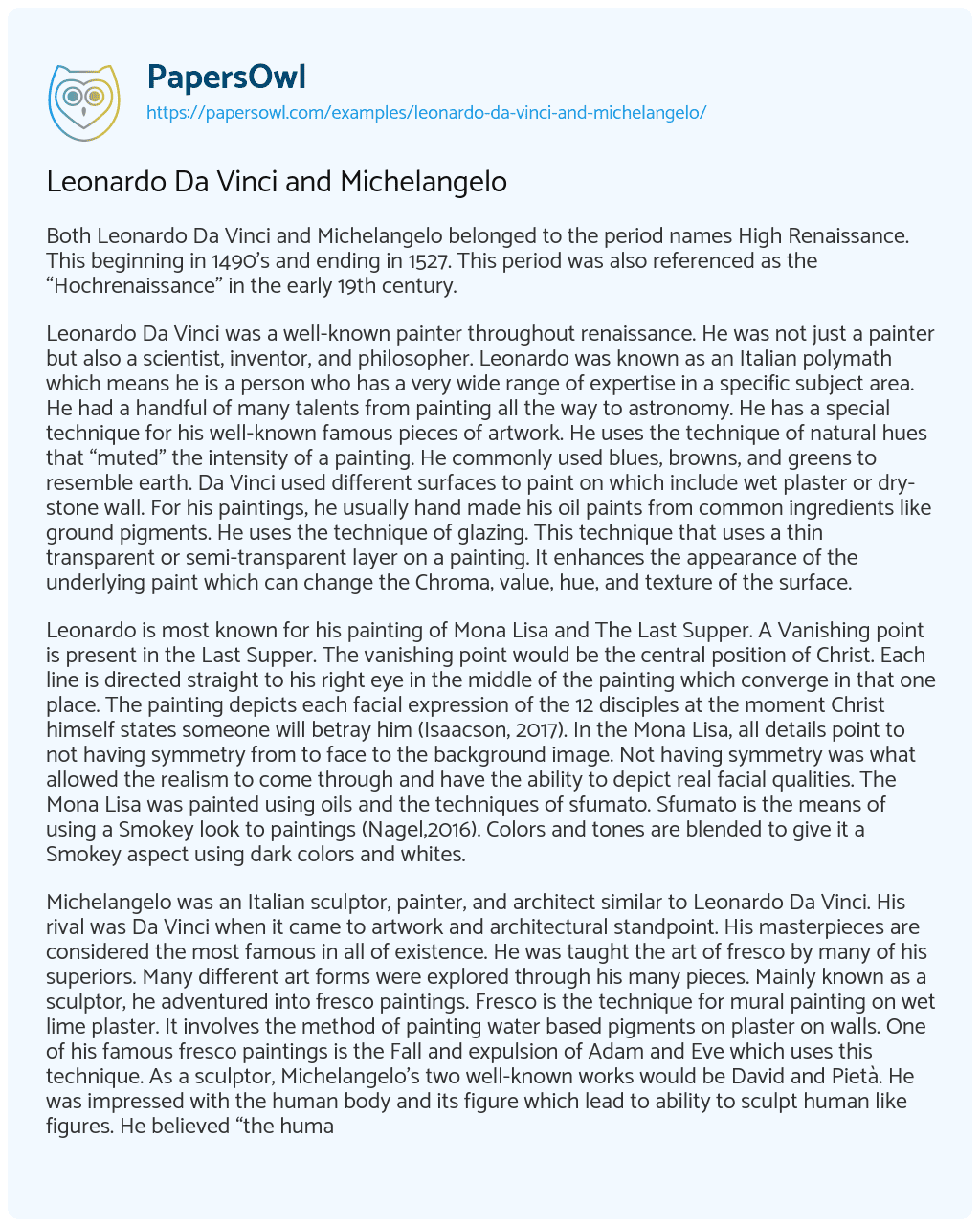 Both Leonardo Da Vinci and Michelangelo belonged to the period names High Renaissance. This beginning in 1490’s and ending in 1527. This period was also referenced as the “Hochrenaissance” in the early 19th century.

Leonardo Da Vinci was a well-known painter throughout renaissance. He was not just a painter but also a scientist, inventor, and philosopher. Leonardo was known as an Italian polymath which means he is a person who has a very wide range of expertise in a specific subject area. He had a handful of many talents from painting all the way to astronomy. He has a special technique for his well-known famous pieces of artwork. He uses the technique of natural hues that “muted” the intensity of a painting. He commonly used blues, browns, and greens to resemble earth. Da Vinci used different surfaces to paint on which include wet plaster or dry-stone wall. For his paintings, he usually hand made his oil paints from common ingredients like ground pigments. He uses the technique of glazing. This technique that uses a thin transparent or semi-transparent layer on a painting. It enhances the appearance of the underlying paint which can change the Chroma, value, hue, and texture of the surface.

Leonardo is most known for his painting of Mona Lisa and The Last Supper. A Vanishing point is present in the Last Supper. The vanishing point would be the central position of Christ. Each line is directed straight to his right eye in the middle of the painting which converge in that one place. The painting depicts each facial expression of the 12 disciples at the moment Christ himself states someone will betray him (Isaacson, 2017). In the Mona Lisa, all details point to not having symmetry from to face to the background image. Not having symmetry was what allowed the realism to come through and have the ability to depict real facial qualities. The Mona Lisa was painted using oils and the techniques of sfumato. Sfumato is the means of using a Smokey look to paintings (Nagel,2016). Colors and tones are blended to give it a Smokey aspect using dark colors and whites.

Michelangelo was an Italian sculptor, painter, and architect similar to Leonardo Da Vinci. His rival was Da Vinci when it came to artwork and architectural standpoint. His masterpieces are considered the most famous in all of existence. He was taught the art of fresco by many of his superiors. Many different art forms were explored through his many pieces. Mainly known as a sculptor, he adventured into fresco paintings. Fresco is the technique for mural painting on wet lime plaster. It involves the method of painting water based pigments on plaster on walls. One of his famous fresco paintings is the Fall and expulsion of Adam and Eve which uses this technique. As a sculptor, Michelangelo’s two well-known works would be David and Pietà. He was impressed with the human body and its figure which lead to ability to sculpt human like figures. He believed “the human body is a beautiful entity that should be naked” (Artble, 2017). The statue of David is a sculpture of a male, a biblical hero, in complete nudity. He is made of marble and is about seventeen feet tall.

Both of these men were major influences in the fifteenth century during the Renaissance. Da Vinci and Michelangelo were two of the most incredible artists during this time but had opposing views towards art and how to take it in their own hands. Da Vinci developed his technique of Sfumato style which is the blending of light and shadows to convey a smoke look. Michelangelo developed his sculpting technique of the human body. Both men appreciated the human body and learned the anatomy to convey to realism in their artworks.

Leonardo Da Vinci was One of the most Important People