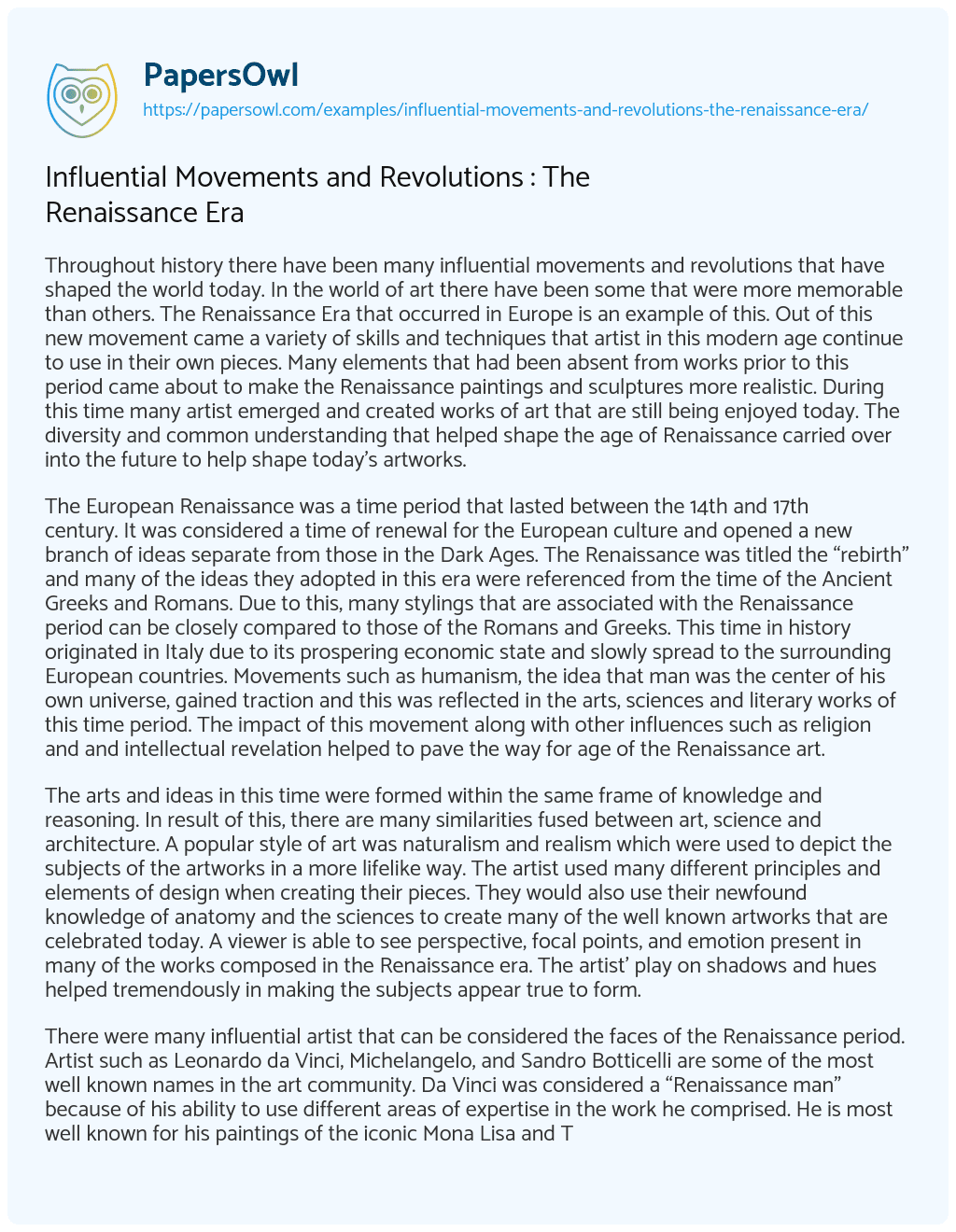 Throughout history there have been many influential movements and revolutions that have shaped the world today. In the world of art there have been some that were more memorable than others. The Renaissance Era that occurred in Europe is an example of this. Out of this new movement came a variety of skills and techniques that artist in this modern age continue to use in their own pieces. Many elements that had been absent from works prior to this period came about to make the Renaissance paintings and sculptures more realistic. During this time many artist emerged and created works of art that are still being enjoyed today. The diversity and common understanding that helped shape the age of Renaissance carried over into the future to help shape today’s artworks.

The European Renaissance was a time period that lasted between the 14th and 17th
century. It was considered a time of renewal for the European culture and opened a new branch of ideas separate from those in the Dark Ages. The Renaissance was titled the “rebirth” and many of the ideas they adopted in this era were referenced from the time of the Ancient Greeks and Romans. Due to this, many stylings that are associated with the Renaissance period can be closely compared to those of the Romans and Greeks. This time in history originated in Italy due to its prospering economic state and slowly spread to the surrounding European countries. Movements such as humanism, the idea that man was the center of his own universe, gained traction and this was reflected in the arts, sciences and literary works of this time period. The impact of this movement along with other influences such as religion and and intellectual revelation helped to pave the way for age of the Renaissance art.

The arts and ideas in this time were formed within the same frame of knowledge and reasoning. In result of this, there are many similarities fused between art, science and architecture. A popular style of art was naturalism and realism which were used to depict the subjects of the artworks in a more lifelike way. The artist used many different principles and elements of design when creating their pieces. They would also use their newfound knowledge of anatomy and the sciences to create many of the well known artworks that are celebrated today. A viewer is able to see perspective, focal points, and emotion present in many of the works composed in the Renaissance era. The artist’ play on shadows and hues helped tremendously in making the subjects appear true to form.

There were many influential artist that can be considered the faces of the Renaissance period. Artist such as Leonardo da Vinci, Michelangelo, and Sandro Botticelli are some of the most well known names in the art community. Da Vinci was considered a “Renaissance man” because of his ability to use different areas of expertise in the work he comprised. He is most well known for his paintings of the iconic Mona Lisa and The Last Supper. The Last Supper was one of the first paintings that was done with oils and was first painted on a plaster wall at the Convent of Saint Maria delle Grazie in Milan. Due to the toll of time and environmental elements, the mural continues to decay despite the multiple touch ups over the years. Da Vinci’s painting of Mona Lisa has gained recognition around the world because of the woman’s mysterious smile. It’s historical significance has created happiness for many people and will continue to do so for years to come.
Michelangelo, on the other hand, was a painter as well as a sculptor and architect. He was one of the most acknowledged artist of the Italian Renaissance and created the beautiful artwork adorning the Sistine Chapel’s ceiling. He was able to create art that was very real in nature and that provided an user experience like no other. He was a very talented individual whose work is still admired today by people from all over the world.

Another worldly renowned creator of this time was William Shakespeare. Although he is not considered an artist in the design and painting area, he was a wonderful play writer and his literary works still resonate today. He is credited with creating over 1,500 words that are used in modern society.