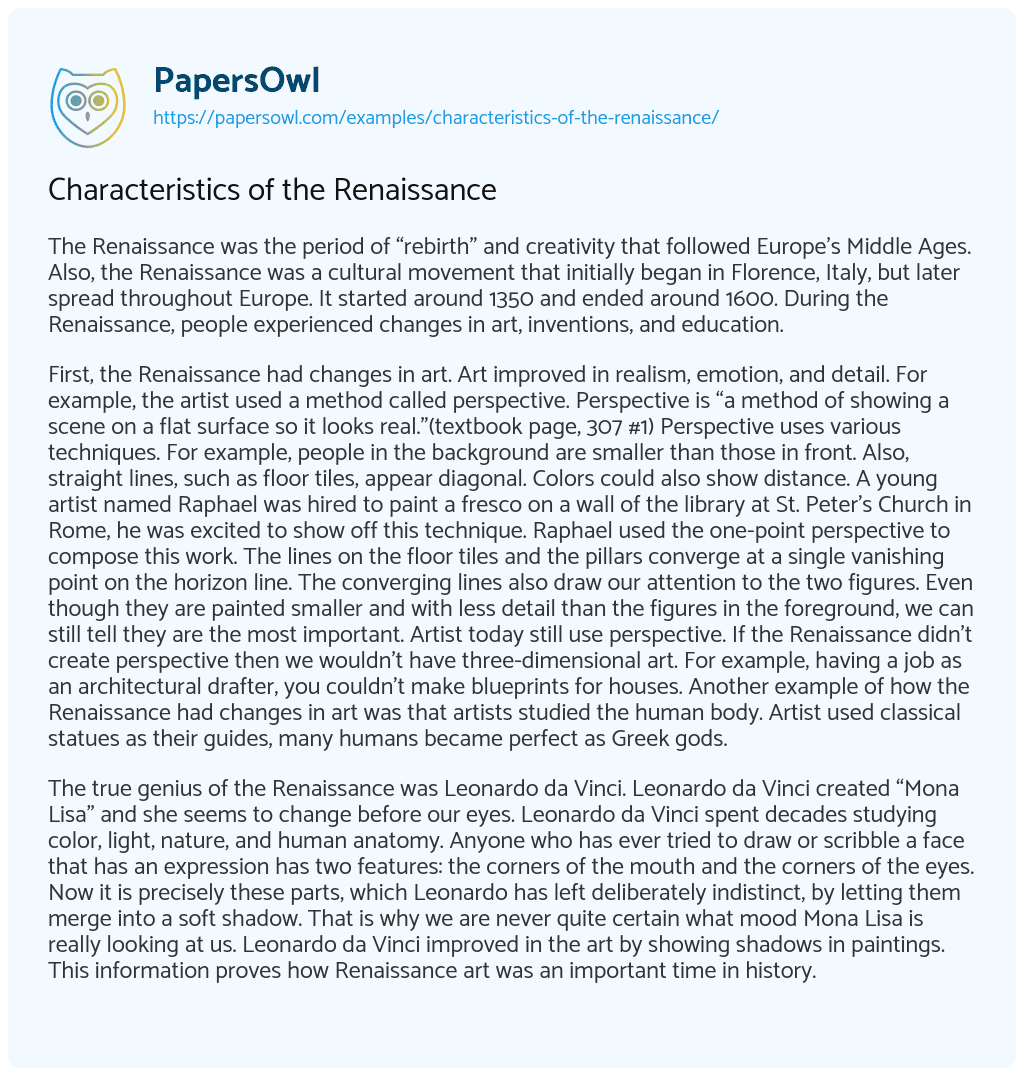 The Renaissance was the period of “rebirth” and creativity that followed Europe’s Middle Ages. Also, the Renaissance was a cultural movement that initially began in Florence, Italy, but later spread throughout Europe. It started around 1350 and ended around 1600. During the Renaissance, people experienced changes in art, inventions, and education.

First, the Renaissance had changes in art. Art improved in realism, emotion, and detail. For example, the artist used a method called perspective. Perspective is “a method of showing a scene on a flat surface so it looks real.”(textbook page, 307 #1) Perspective uses various techniques. For example, people in the background are smaller than those in front. Also, straight lines, such as floor tiles, appear diagonal. Colors could also show distance. A young artist named Raphael was hired to paint a fresco on a wall of the library at St. Peter’s Church in Rome, he was excited to show off this technique. Raphael used the one-point perspective to compose this work. The lines on the floor tiles and the pillars converge at a single vanishing point on the horizon line. The converging lines also draw our attention to the two figures. Even though they are painted smaller and with less detail than the figures in the foreground, we can still tell they are the most important. Artist today still use perspective. If the Renaissance didn’t create perspective then we wouldn’t have three-dimensional art. For example, having a job as an architectural drafter, you couldn’t make blueprints for houses. Another example of how the Renaissance had changes in art was that artists studied the human body. Artist used classical statues as their guides, many humans became perfect as Greek gods.

The true genius of the Renaissance was Leonardo da Vinci. Leonardo da Vinci created “Mona Lisa” and she seems to change before our eyes. Leonardo da Vinci spent decades studying color, light, nature, and human anatomy. Anyone who has ever tried to draw or scribble a face that has an expression has two features: the corners of the mouth and the corners of the eyes. Now it is precisely these parts, which Leonardo has left deliberately indistinct, by letting them merge into a soft shadow. That is why we are never quite certain what mood Mona Lisa is really looking at us. Leonardo da Vinci improved in the art by showing shadows in paintings. This information proves how Renaissance art was an important time in history.

Characteristics of the Renaissance. (2021, Apr 26). Retrieved from https://papersowl.com/examples/characteristics-of-the-renaissance/