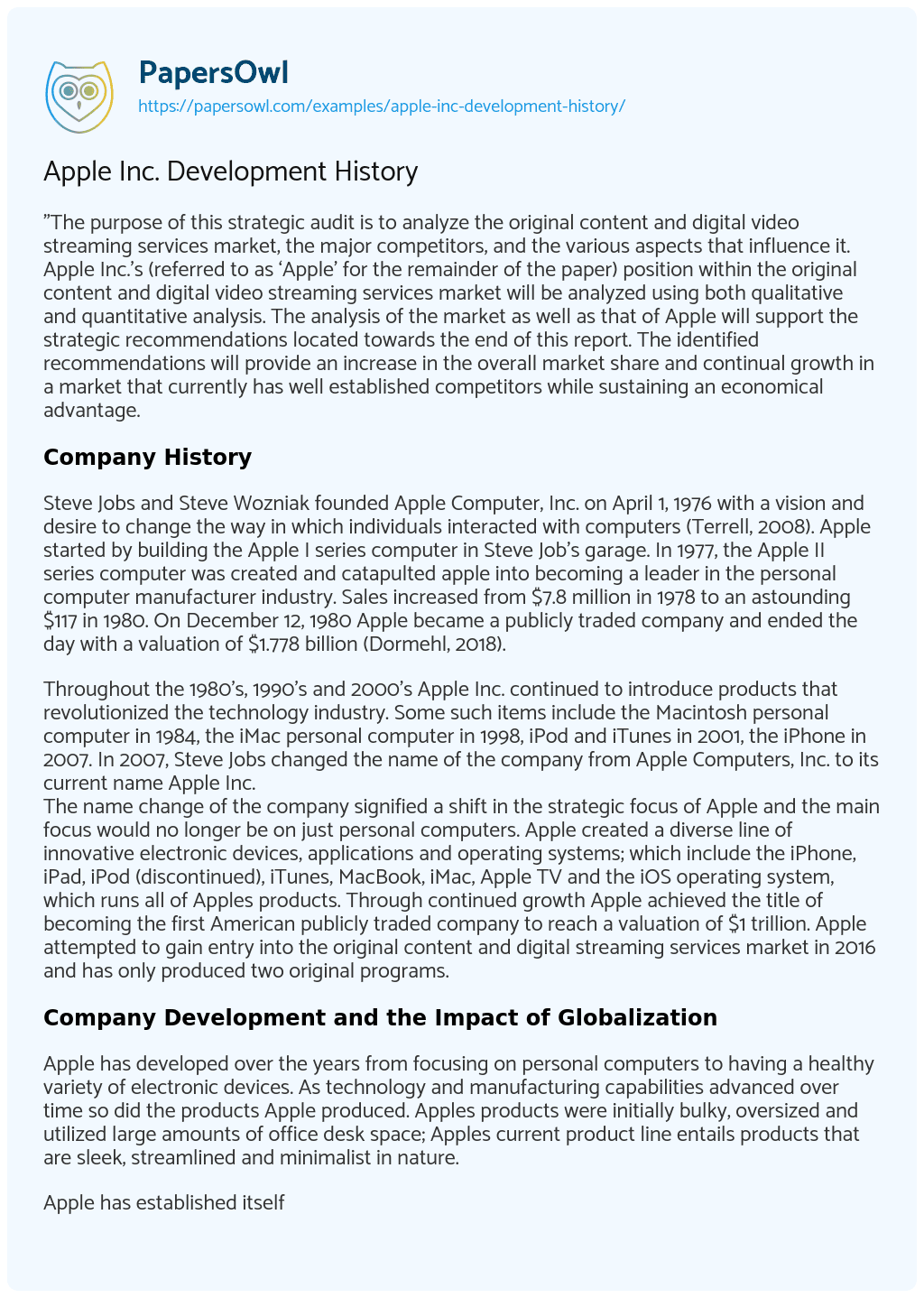 “The purpose of this strategic audit is to analyze the original content and digital video streaming services market, the major competitors, and the various aspects that influence it. Apple Inc.’s (referred to as ‘Apple’ for the remainder of the paper) position within the original content and digital video streaming services market will be analyzed using both qualitative and quantitative analysis. The analysis of the market as well as that of Apple will support the strategic recommendations located towards the end of this report. The identified recommendations will provide an increase in the overall market share and continual growth in a market that currently has well established competitors while sustaining an economical advantage.

Steve Jobs and Steve Wozniak founded Apple Computer, Inc. on April 1, 1976 with a vision and desire to change the way in which individuals interacted with computers (Terrell, 2008). Apple started by building the Apple I series computer in Steve Job’s garage. In 1977, the Apple II series computer was created and catapulted apple into becoming a leader in the personal computer manufacturer industry. Sales increased from $7.8 million in 1978 to an astounding $117 in 1980. On December 12, 1980 Apple became a publicly traded company and ended the day with a valuation of $1.778 billion (Dormehl, 2018).

Throughout the 1980’s, 1990’s and 2000’s Apple Inc. continued to introduce products that revolutionized the technology industry. Some such items include the Macintosh personal computer in 1984, the iMac personal computer in 1998, iPod and iTunes in 2001, the iPhone in 2007. In 2007, Steve Jobs changed the name of the company from Apple Computers, Inc. to its current name Apple Inc.
The name change of the company signified a shift in the strategic focus of Apple and the main focus would no longer be on just personal computers. Apple created a diverse line of innovative electronic devices, applications and operating systems; which include the iPhone, iPad, iPod (discontinued), iTunes, MacBook, iMac, Apple TV and the iOS operating system, which runs all of Apples products. Through continued growth Apple achieved the title of becoming the first American publicly traded company to reach a valuation of $1 trillion. Apple attempted to gain entry into the original content and digital streaming services market in 2016 and has only produced two original programs.

Company Development and the Impact of Globalization

Apple has developed over the years from focusing on personal computers to having a healthy variety of electronic devices. As technology and manufacturing capabilities advanced over time so did the products Apple produced. Apples products were initially bulky, oversized and utilized large amounts of office desk space; Apples current product line entails products that are sleek, streamlined and minimalist in nature.

Apple has established itself as a leader in innovation and the technology industry. In stride with competitors and other U.S. corporations Apple has sought the use of low-cost overseas manufacturing and improvements in efficiency. Many of the components for Apple’s products are manufactured and partially assembled in manufacturing facilities located in Southeast Asia and China. A massive undertaking of resolving logistical challenges would be required if the final product assembly were located within the United States. The average direct labor cost to assemble an iPhone in China is approximately $10-12 where as the estimated labor cost to assemble be at least $75 (Shih, 2018); that is a difference in labor cost of $63-65. That may no seem like a significant cost difference, however, Apple reported selling 5.5 million iPhone 8 & 8 Plus devices (Jones, 2017). By assembling the iPhone 8 & 8 Plus in China versus the United States Apple was able to save approximately $346,500,000 to $357,500,000 in direct labor cost. This cost savings is one example of how Apple has reduced costs and positioned itself financially to enter the original content and digital streaming services industry.”

Foundation and Development of Apple Inc