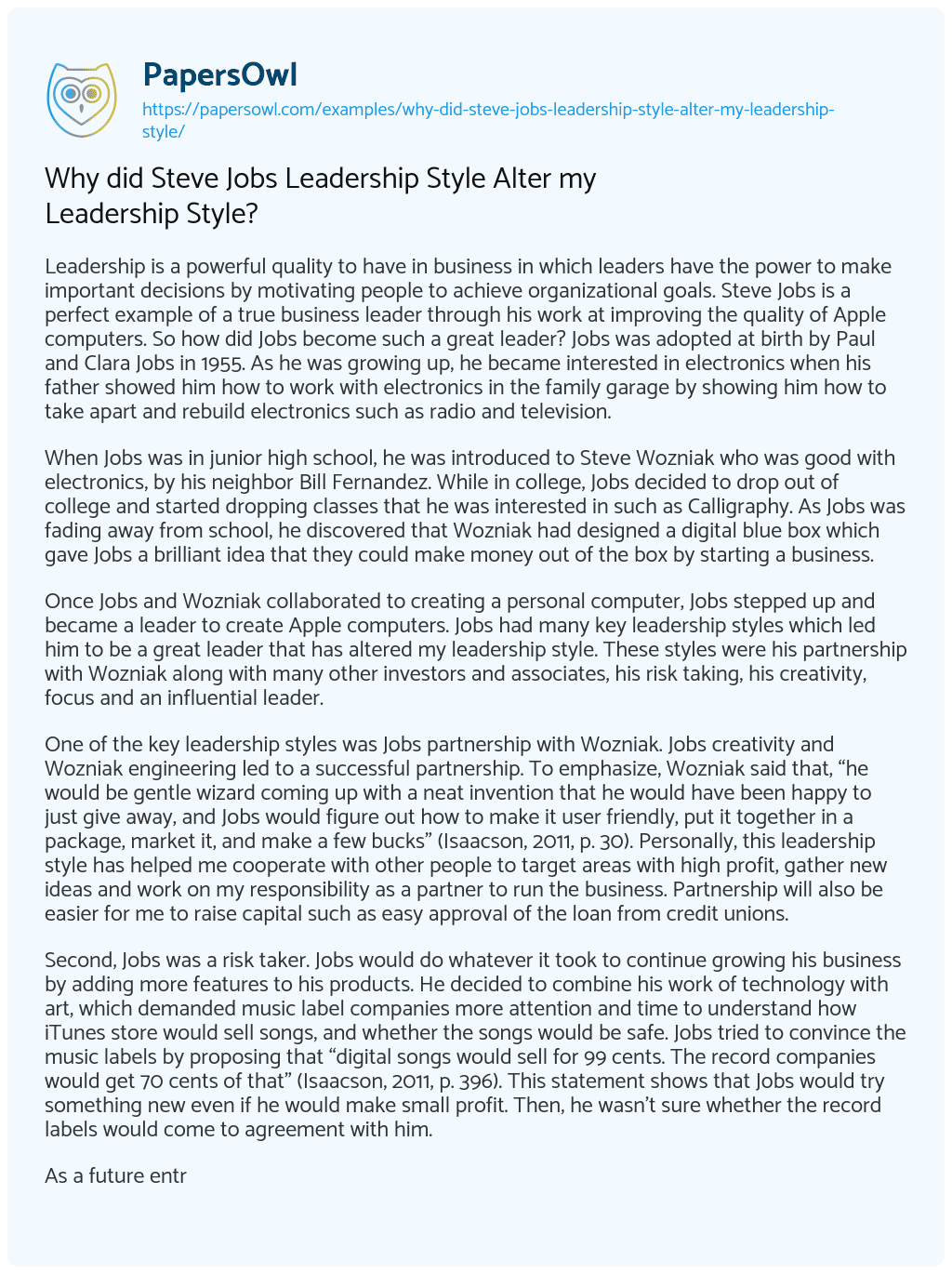 Leadership is a powerful quality to have in business in which leaders have the power to make important decisions by motivating people to achieve organizational goals. Steve Jobs is a perfect example of a true business leader through his work at improving the quality of Apple computers. So how did Jobs become such a great leader? Jobs was adopted at birth by Paul and Clara Jobs in 1955. As he was growing up, he became interested in electronics when his father showed him how to work with electronics in the family garage by showing him how to take apart and rebuild electronics such as radio and television.

When Jobs was in junior high school, he was introduced to Steve Wozniak who was good with electronics, by his neighbor Bill Fernandez. While in college, Jobs decided to drop out of college and started dropping classes that he was interested in such as Calligraphy. As Jobs was fading away from school, he discovered that Wozniak had designed a digital blue box which gave Jobs a brilliant idea that they could make money out of the box by starting a business.

Once Jobs and Wozniak collaborated to creating a personal computer, Jobs stepped up and became a leader to create Apple computers. Jobs had many key leadership styles which led him to be a great leader that has altered my leadership style. These styles were his partnership with Wozniak along with many other investors and associates, his risk taking, his creativity, focus and an influential leader.

One of the key leadership styles was Jobs partnership with Wozniak. Jobs creativity and Wozniak engineering led to a successful partnership. To emphasize, Wozniak said that, “he would be gentle wizard coming up with a neat invention that he would have been happy to just give away, and Jobs would figure out how to make it user friendly, put it together in a package, market it, and make a few bucks” (Isaacson, 2011, p. 30). Personally, this leadership style has helped me cooperate with other people to target areas with high profit, gather new ideas and work on my responsibility as a partner to run the business. Partnership will also be easier for me to raise capital such as easy approval of the loan from credit unions.

Second, Jobs was a risk taker. Jobs would do whatever it took to continue growing his business by adding more features to his products. He decided to combine his work of technology with art, which demanded music label companies more attention and time to understand how iTunes store would sell songs, and whether the songs would be safe. Jobs tried to convince the music labels by proposing that “digital songs would sell for 99 cents. The record companies would get 70 cents of that” (Isaacson, 2011, p. 396). This statement shows that Jobs would try something new even if he would make small profit. Then, he wasn’t sure whether the record labels would come to agreement with him.

As a future entrepreneur, being a risk taker will push my limits and overcome fear to develop new ideas which can lead to successful products. Furthermore, I will be comfortable to step out of my comfort zone as a leader and engage myself with everyone. Third, Jobs creativity made him unique from many leaders worldwide. He knew what exactly he wanted, and how to simplify his products. To support this statement, Jobs insisted people to “think differently…instead of beige boxes and monitors with a welter of cables and a bulky set up manual, here was a friendly and spunky appliance, smooth to touch and as pleasing to the eye as a robin’s egg” (Isaacson, 2011, p. 355). Jobs designed his products simple, user friendly and portable to make customers enjoy using them such as apple computer, iPod, iPad and iPhone. Moreover, Jobs was smart enough that he not only designed his products as a marketer, instead he put himself in the mindset of a customer to satisfy their needs.

For instance, I visited both Microsoft and Apple stores whereby Microsoft design was more complicated to use and was not portable enough, while apple was easy to use without much help from the employees, attractive and portable. As a business leader, creativity will help me solve problems by improving the quality and quantity of my product to reduce risk, improve the performance of the employees, to increase productivity, and find new ways of making profit to stay ahead of the competition in the market.

Another style was that Jobs was a focused leader. He paid attention to small details on his Apple products. Hartmut Esslinger, one of Jobs designers said, “When Jobs noticed a tiny line in the chassis caused by the molds, something that any other computer maker would accept as unavoidable, he flew to Chicago and convince the die caster to start over and do it perfectly” (Isaacson, 2011, p.222). As a leader, being focused is important to ensure that every detail is heading in the right direction with the product. This style will allow myself as leader to pin point problems that need to be corrected early enough before any further progress for better results.

Finally, Jobs was influential. His creativity revolutionized not only his company and his products, but also creation of smart phones from other companies. Moreover, he influenced people to create different applications called apps that helped people to engage themselves in different activities and transform his products into being more user friendly. To clarify this statement, Phil Schiller a senior vice president of Marketing Apple stated that, “I couldn’t imagine that we would create something as powerful as the iPhone and not empower developers to make lots of apps” (Isaacson, 2011, p. 501). Leaders should inspire other people such as the employees to overcome fear, and have courage to optimize their talents to accomplish their goals.

However, Jobs always harshly criticized people using inappropriate words who worked for him. I think he was perfectionist and always wanted things exactly done his way. He thought that he knew better than anyone, instead he was pushing other people away. For example, Jobs criticized James Vincent, an employee from advertising agency that he had hired to advertise his iPad when he said that, “your commercial sucks…iPad is revolutionizing the world, and we need something big. You’ve given me small shit” (Isaacson, 2011, p. 498). However, I disagree with his style of criticism.

As feedback being part of the Motivation topic in my Leadership Processes course, I believe this leadership style wasn’t the best approach as a leader to give his employee feedback. Leaders should always try to give employees constructive criticism without the use of abusive language, which can help them find other ways to solve a problem. Also, leaders should be open to listen to employees’ ideas, encourage employees to keep trying when working on a problem, and reward the employees when necessary. Thus, the employees will be motivated to work harder and reduce absenteeism for an increase in production.

Lastly, reading Jobs novel has altered and improved my leadership skills to think critically solving problems, engaging myself with other people and being open to their ideas, overcome fear of trying new things, paying close attention to my ideas and influence other people.