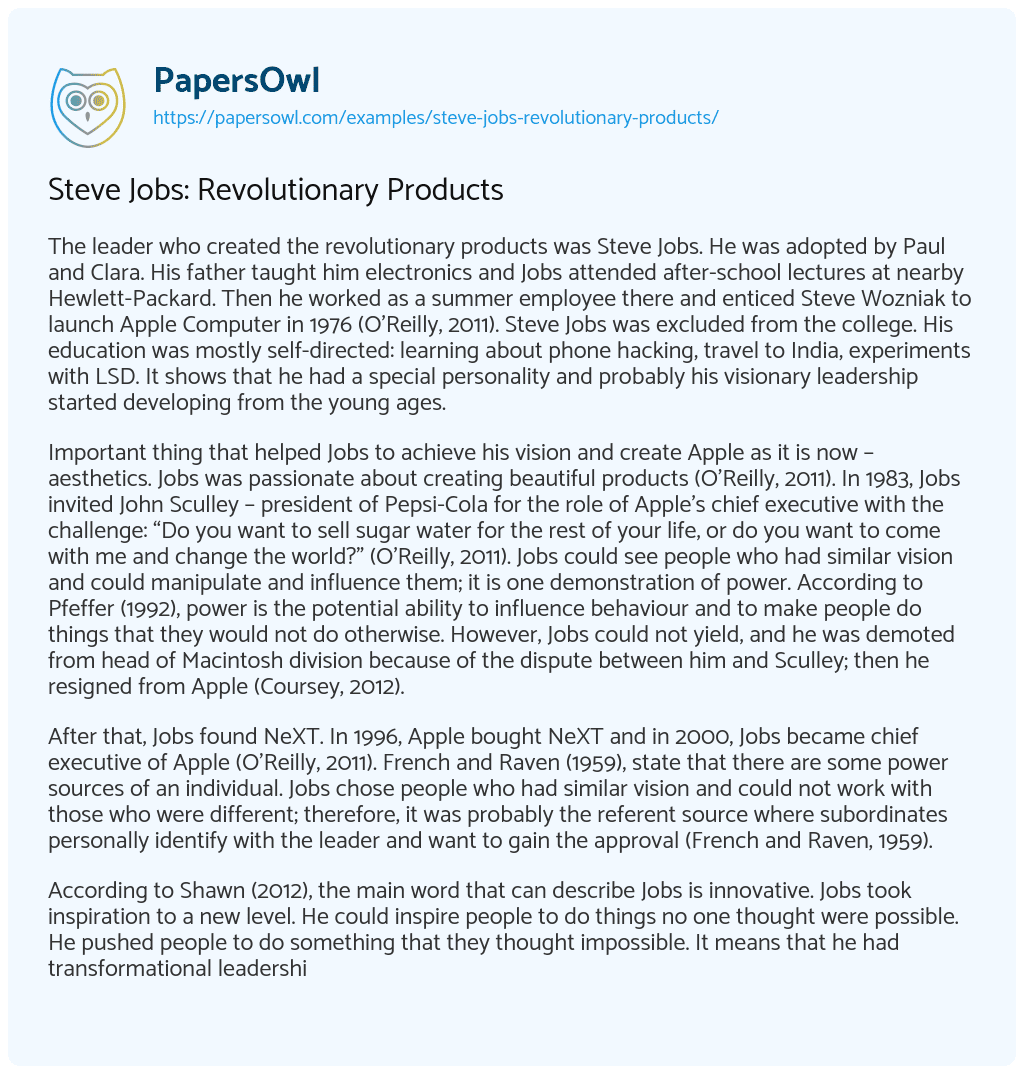 The leader who created the revolutionary products was Steve Jobs. He was adopted by Paul and Clara. His father taught him electronics and Jobs attended after-school lectures at nearby Hewlett-Packard. Then he worked as a summer employee there and enticed Steve Wozniak to launch Apple Computer in 1976 (O’Reilly, 2011). Steve Jobs was excluded from the college. His education was mostly self-directed: learning about phone hacking, travel to India, experiments with LSD. It shows that he had a special personality and probably his visionary leadership started developing from the young ages.

Important thing that helped Jobs to achieve his vision and create Apple as it is now – aesthetics. Jobs was passionate about creating beautiful products (O’Reilly, 2011). In 1983, Jobs invited John Sculley – president of Pepsi-Cola for the role of Apple’s chief executive with the challenge: “Do you want to sell sugar water for the rest of your life, or do you want to come with me and change the world?” (O’Reilly, 2011). Jobs could see people who had similar vision and could manipulate and influence them; it is one demonstration of power. According to Pfeffer (1992), power is the potential ability to influence behaviour and to make people do things that they would not do otherwise. However, Jobs could not yield, and he was demoted from head of Macintosh division because of the dispute between him and Sculley; then he resigned from Apple (Coursey, 2012).

After that, Jobs found NeXT. In 1996, Apple bought NeXT and in 2000, Jobs became chief executive of Apple (O’Reilly, 2011). French and Raven (1959), state that there are some power sources of an individual. Jobs chose people who had similar vision and could not work with those who were different; therefore, it was probably the referent source where subordinates personally identify with the leader and want to gain the approval (French and Raven, 1959).

According to Shawn (2012), the main word that can describe Jobs is innovative. Jobs took inspiration to a new level. He could inspire people to do things no one thought were possible. He pushed people to do something that they thought impossible. It means that he had transformational leadershi