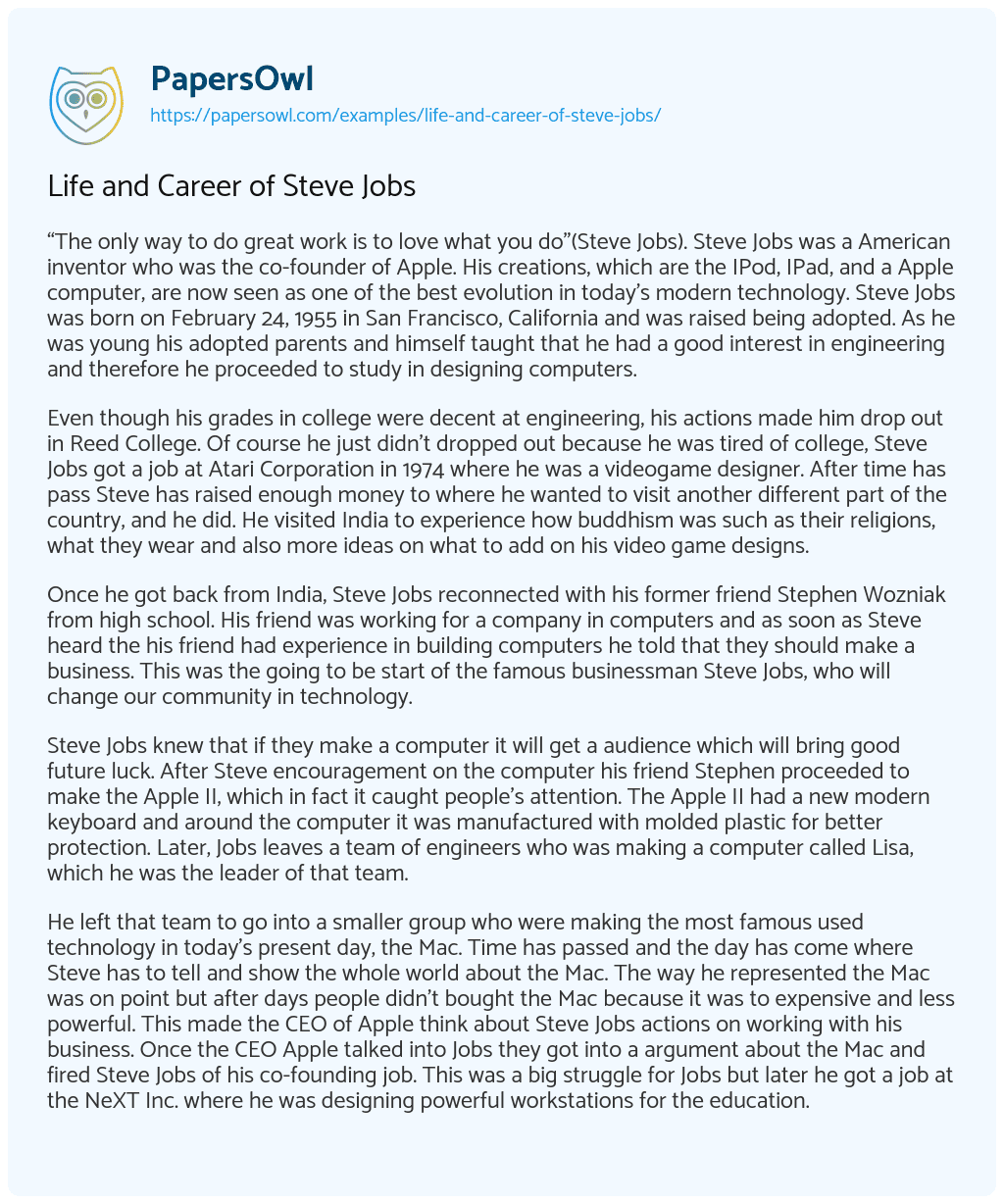 “The only way to do great work is to love what you do”(Steve Jobs). Steve Jobs was a American inventor who was the co-founder of Apple. His creations, which are the IPod, IPad, and a Apple computer, are now seen as one of the best evolution in today’s modern technology. Steve Jobs was born on February 24, 1955 in San Francisco, California and was raised being adopted. As he was young his adopted parents and himself taught that he had a good interest in engineering and therefore he proceeded to study in designing computers.

Even though his grades in college were decent at engineering, his actions made him drop out in Reed College. Of course he just didn’t dropped out because he was tired of college, Steve Jobs got a job at Atari Corporation in 1974 where he was a videogame designer. After time has pass Steve has raised enough money to where he wanted to visit another different part of the country, and he did. He visited India to experience how buddhism was such as their religions, what they wear and also more ideas on what to add on his video game designs.

Once he got back from India, Steve Jobs reconnected with his former friend Stephen Wozniak from high school. His friend was working for a company in computers and as soon as Steve heard the his friend had experience in building computers he told that they should make a business. This was the going to be start of the famous businessman Steve Jobs, who will change our community in technology.

Steve Jobs knew that if they make a computer it will get a audience which will bring good future luck. After Steve encouragement on the computer his friend Stephen proceeded to make the Apple II, which in fact it caught people’s attention. The Apple II had a new modern keyboard and around the computer it was manufactured with molded plastic for better protection. Later, Jobs leaves a team of engineers who was making a computer called Lisa, which he was the leader of that team.

He left that team to go into a smaller group who were making the most famous used technology in today’s present day, the Mac. Time has passed and the day has come where Steve has to tell and show the whole world about the Mac. The way he represented the Mac was on point but after days people didn’t bought the Mac because it was to expensive and less powerful. This made the CEO of Apple think about Steve Jobs actions on working with his business. Once the CEO Apple talked into Jobs they got into a argument about the Mac and fired Steve Jobs of his co-founding job. This was a big struggle for Jobs but later he got a job at the NeXT Inc. where he was designing powerful workstations for the education.

Life and Career of Steve Jobs. (2019, May 19). Retrieved from https://papersowl.com/examples/life-and-career-of-steve-jobs/

The Goal of Steve Jobs