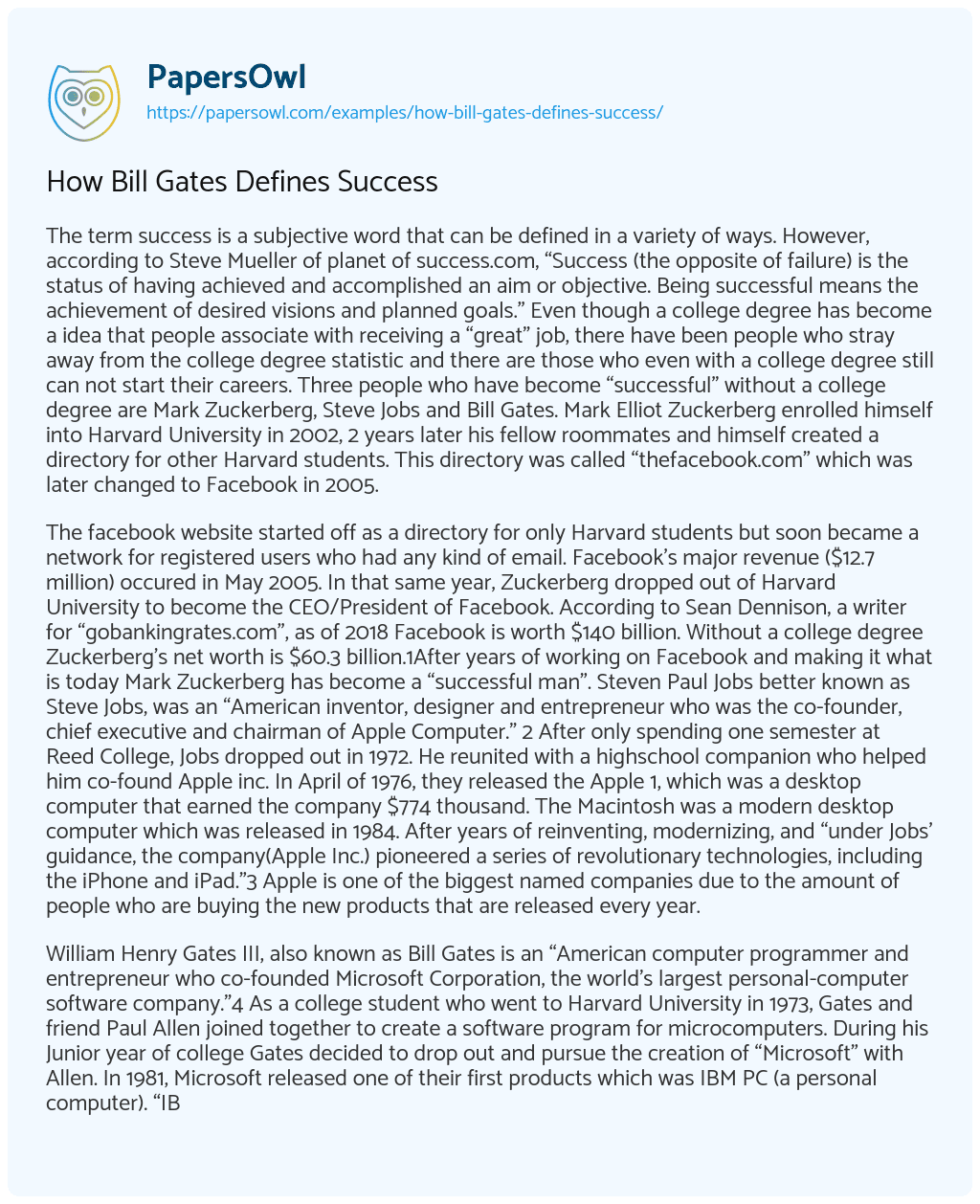 The term success is a subjective word that can be defined in a variety of ways. However, according to Steve Mueller of planet of success.com, “Success (the opposite of failure) is the status of having achieved and accomplished an aim or objective. Being successful means the achievement of desired visions and planned goals.” Even though a college degree has become a idea that people associate with receiving a “great” job, there have been people who stray away from the college degree statistic and there are those who even with a college degree still can not start their careers. Three people who have become “successful” without a college degree are Mark Zuckerberg, Steve Jobs and Bill Gates. Mark Elliot Zuckerberg enrolled himself into Harvard University in 2002, 2 years later his fellow roommates and himself created a directory for other Harvard students. This directory was called “thefacebook.com” which was later changed to Facebook in 2005.

The facebook website started off as a directory for only Harvard students but soon became a network for registered users who had any kind of email. Facebook’s major revenue ($12.7 million) occured in May 2005. In that same year, Zuckerberg dropped out of Harvard University to become the CEO/President of Facebook. According to Sean Dennison, a writer for “gobankingrates.com”, as of 2018 Facebook is worth $140 billion. Without a college degree Zuckerberg’s net worth is $60.3 billion.1After years of working on Facebook and making it what is today Mark Zuckerberg has become a “successful man”. Steven Paul Jobs better known as Steve Jobs, was an “American inventor, designer and entrepreneur who was the co-founder, chief executive and chairman of Apple Computer.” 2 After only spending one semester at Reed College, Jobs dropped out in 1972. He reunited with a highschool companion who helped him co-found Apple inc. In April of 1976, they released the Apple 1, which was a desktop computer that earned the company $774 thousand. The Macintosh was a modern desktop computer which was released in 1984. After years of reinventing, modernizing, and “under Jobs’ guidance, the company(Apple Inc.) pioneered a series of revolutionary technologies, including the iPhone and iPad.”3 Apple is one of the biggest named companies due to the amount of people who are buying the new products that are released every year.

William Henry Gates III, also known as Bill Gates is an “American computer programmer and entrepreneur who co-founded Microsoft Corporation, the world’s largest personal-computer software company.”4 As a college student who went to Harvard University in 1973, Gates and friend Paul Allen joined together to create a software program for microcomputers. During his Junior year of college Gates decided to drop out and pursue the creation of “Microsoft” with Allen. In 1981, Microsoft released one of their first products which was IBM PC (a personal computer). “IBM quickly set the technical standard for the PC industry, and MS-DOS likewise pushed out competing operating systems.”5 Microsoft has evolved and adapted to its time, now this programming software and other products are being used day to day. “Ultimately, the PC will be a window to everything people are interested in-and everything we need to know.”-Bill Gates After years of increasing revenue, Microsoft is worth $739 billion. As of today, Bill Gates net worth is $97.7 billion.Bill Gates, Mark Zuckerberg and Steve Jobs were able to make careers out of ideas that they seemed to find interest in.

A vast amount of college graduates are facing underemployment meaning they are working in positions that do not require a college degree. “Over half (54%) of psychology majors have a first job that does not require a college degree, and over two-thirds of those remain underemployed after five years. First-job underemployment rates are similarly high for biology and biomedicine majors (51%) and education majors (50%).”6 College students are advised to not accept job offers that do not require a degree. However, students can not take the risk of not having a consistent income. Therefore, college graduates getting out of underemployed jobs has become another issue because they end up being stuck in their first job. The word success again is a broad term that can be defined in a million different ways.

Bill Gates and his Company: Microsoft