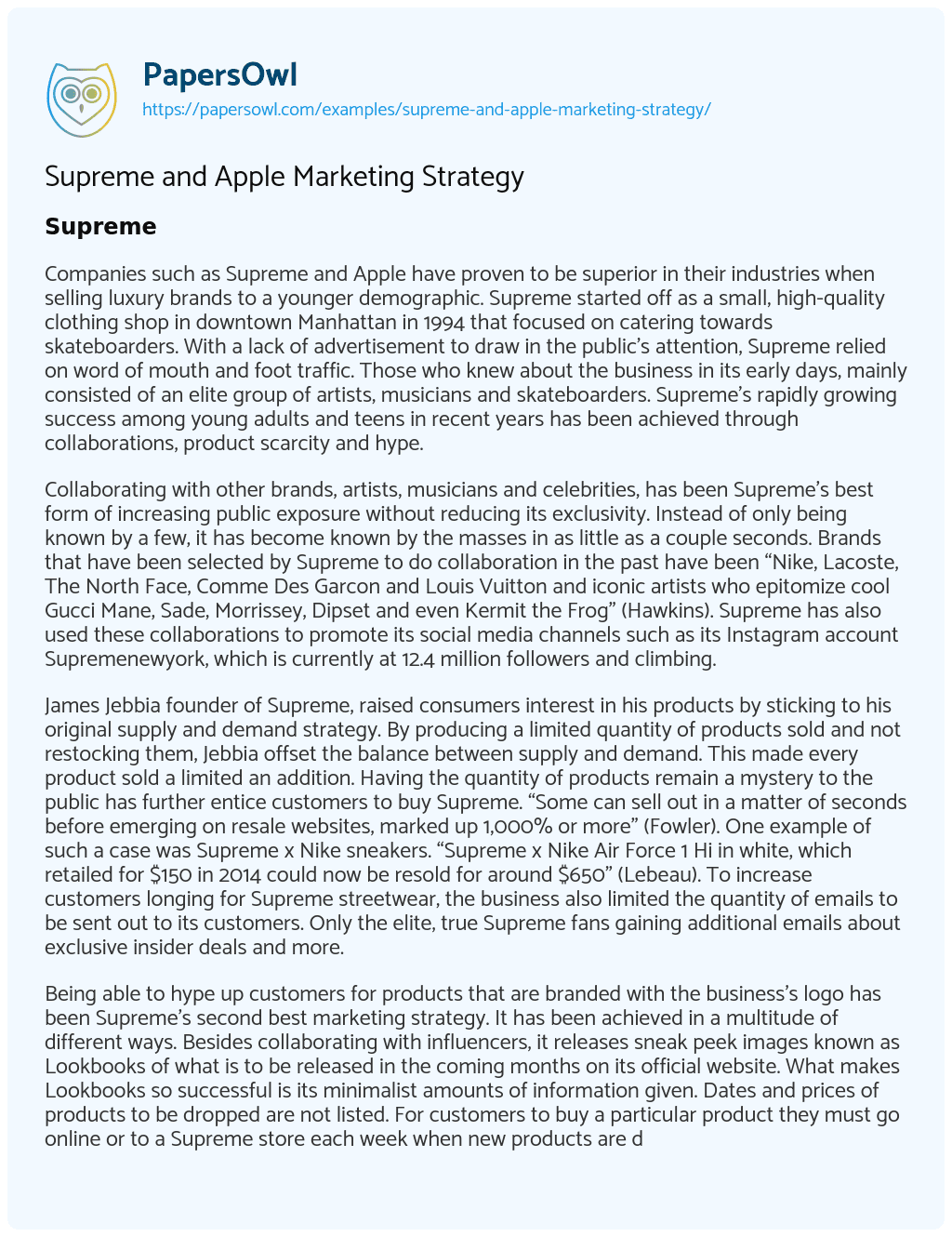 Companies such as Supreme and Apple have proven to be superior in their industries when selling luxury brands to a younger demographic. Supreme started off as a small, high-quality clothing shop in downtown Manhattan in 1994 that focused on catering towards skateboarders. With a lack of advertisement to draw in the public’s attention, Supreme relied on word of mouth and foot traffic. Those who knew about the business in its early days, mainly consisted of an elite group of artists, musicians and skateboarders. Supreme’s rapidly growing success among young adults and teens in recent years has been achieved through collaborations, product scarcity and hype.

Collaborating with other brands, artists, musicians and celebrities, has been Supreme’s best form of increasing public exposure without reducing its exclusivity. Instead of only being known by a few, it has become known by the masses in as little as a couple seconds. Brands that have been selected by Supreme to do collaboration in the past have been “Nike, Lacoste, The North Face, Comme Des Garcon and Louis Vuitton and iconic artists who epitomize cool Gucci Mane, Sade, Morrissey, Dipset and even Kermit the Frog” (Hawkins). Supreme has also used these collaborations to promote its social media channels such as its Instagram account Supremenewyork, which is currently at 12.4 million followers and climbing.

James Jebbia founder of Supreme, raised consumers interest in his products by sticking to his original supply and demand strategy. By producing a limited quantity of products sold and not restocking them, Jebbia offset the balance between supply and demand. This made every product sold a limited an addition. Having the quantity of products remain a mystery to the public has further entice customers to buy Supreme. “Some can sell out in a matter of seconds before emerging on resale websites, marked up 1,000% or more” (Fowler). One example of such a case was Supreme x Nike sneakers. “Supreme x Nike Air Force 1 Hi in white, which retailed for $150 in 2014 could now be resold for around $650” (Lebeau). To increase customers longing for Supreme streetwear, the business also limited the quantity of emails to be sent out to its customers. Only the elite, true Supreme fans gaining additional emails about exclusive insider deals and more.

Being able to hype up customers for products that are branded with the business’s logo has been Supreme’s second best marketing strategy. It has been achieved in a multitude of different ways. Besides collaborating with influencers, it releases sneak peek images known as Lookbooks of what is to be released in the coming months on its official website. What makes Lookbooks so successful is its minimalist amounts of information given. Dates and prices of products to be dropped are not listed. For customers to buy a particular product they must go online or to a Supreme store each week when new products are dropped. Other products that keep customers on their toes are Supreme’s unorthodox accessories. In the past it has put its brand on miscellaneous everyday objects from dog bowls to the headliner of the New York Times, showing no bounds as to what object could show the brand next. Loyal fans of consumer goods known as Hypebeasts also increase consumers enthusiasm by cultivating the Supreme culture on a website called Hypebests.com that dedicates a fashion segment to Supreme. It is here that fans and ordinary customers can go to socialize about all things Supreme.

This brand giant has become world renowned by sticking to its marketing strategy. By using limited product availability, influencers and hype to target humans basic psychological need for belonging to a society. By growing its elite cool group image Supremes’ streetwear have become more of collector’s items then clothing. This has made resale of Supreme collaborations skyrocket. This just goes to show not all marketing strategies need to rely on paying out millions of dollars in direct advertisement for a business to be successful.

Apple Inc. has become a company giant by setting the standard in revolutionizing the tech industry. From the first Apple l personal computer to the latest iPhone, consumers of all ages have gathered to buy the company’s products. Leading this group of Apple users has been young adults and teens. To harness this generation’s attention, Apple has marketed towards them with early interaction, simplicity and brand intimacy.

Many Millennial Apple users of today started off using Apple products in the classroom. From the early stages of Apple, Steve Jobs the founder of Apple Inc., had pushed for his products to be available in schools. The first product to make its way into the classroom was the Apple ll personal computer in 1798. Since then millions of classes use Apple technology in the U.S. By encouraging students to learn and use Apple software they became more accepting of the idea of using this style of software when more directed products like the iPod came out.

Young adults are also drawn to the company’s simplistic marketing design, by making its customers feel more at ease and less overwhelmed. Details regarding Apple’s products are written without tech jargon and put in bullet point formation to make it easier for the average person to read and understand. “According to research done by CEB, companies who simplified and streamlined the decision-making process for their customers were 86% more likely to make a sale” (DeMers). Its commercials are also simplistic in that they do not overload its viewers with information. Instead they demonstrate how its products make users lives more easy, enjoyable and or sociable.

Lastly, Apple Inc. targets younger generation by creating brand intimacy. “In an online study taken by MBLM, of 6,000 people worldwide, Apple was named the most intimate brand, topping Disney and Amazon” (Reisinger). It does this by tapping into people’s emotions. Apple expresses that it has what younger generations need to be successful or more connected with friends and family. One of Apple’s best examples of instilling this idea was through its 2003 Christmas commercial titled Misunderstood (SilverSnow). In this commercial a stereotypical teenager is constantly on his phone not interacting with his family, but then shocks everyone by showing heartwarming family moments on Christmas with the help of his iPhone 6. By showing events that could happen in real life, Apple has had an easier time winning over people’s trust.

For the last 42-years of being in business Apple has gained popularity by showing customers how different the company is from its competitors. By doing so it has remained one of the most profitable mobile device companies in the world. When creating loyal brand followers, Apple has become an idol to other companies looking to improve their target market strategies. For companies to be the best in their industry while having a multitude of competing competitors it must gain a following of loyal customers and that’s exactly what Apple has done.

Companies such as Supreme and Apple