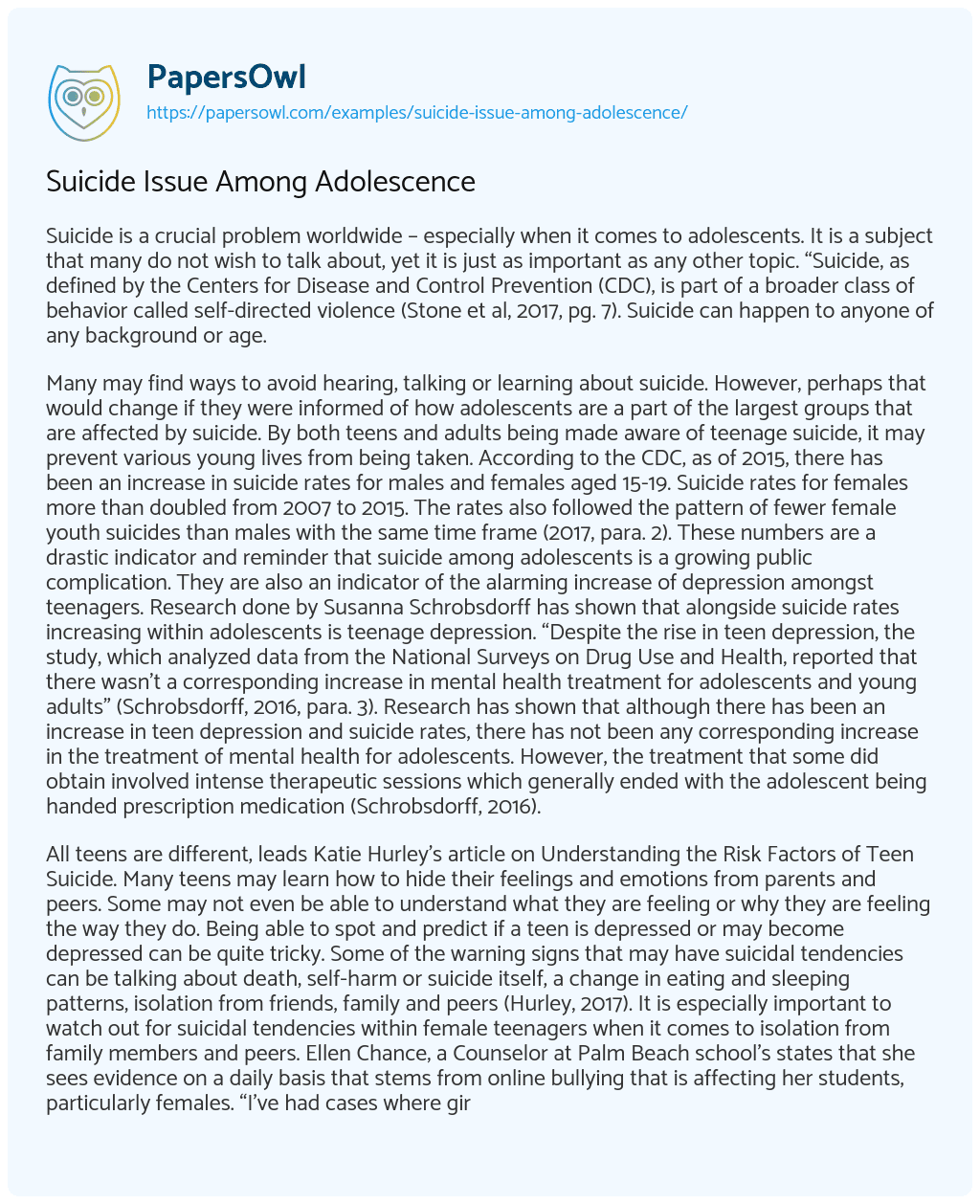 Suicide is a crucial problem worldwide – especially when it comes to adolescents. It is a subject that many do not wish to talk about, yet it is just as important as any other topic. “Suicide, as defined by the Centers for Disease and Control Prevention (CDC), is part of a broader class of behavior called self-directed violence (Stone et al, 2017, pg. 7). Suicide can happen to anyone of any background or age.

Many may find ways to avoid hearing, talking or learning about suicide. However, perhaps that would change if they were informed of how adolescents are a part of the largest groups that are affected by suicide. By both teens and adults being made aware of teenage suicide, it may prevent various young lives from being taken. According to the CDC, as of 2015, there has been an increase in suicide rates for males and females aged 15-19. Suicide rates for females more than doubled from 2007 to 2015. The rates also followed the pattern of fewer female youth suicides than males with the same time frame (2017, para. 2). These numbers are a drastic indicator and reminder that suicide among adolescents is a growing public complication. They are also an indicator of the alarming increase of depression amongst teenagers. Research done by Susanna Schrobsdorff has shown that alongside suicide rates increasing within adolescents is teenage depression. “Despite the rise in teen depression, the study, which analyzed data from the National Surveys on Drug Use and Health, reported that there wasn’t a corresponding increase in mental health treatment for adolescents and young adults” (Schrobsdorff, 2016, para. 3). Research has shown that although there has been an increase in teen depression and suicide rates, there has not been any corresponding increase in the treatment of mental health for adolescents. However, the treatment that some did obtain involved intense therapeutic sessions which generally ended with the adolescent being handed prescription medication (Schrobsdorff, 2016).

All teens are different, leads Katie Hurley’s article on Understanding the Risk Factors of Teen Suicide. Many teens may learn how to hide their feelings and emotions from parents and peers. Some may not even be able to understand what they are feeling or why they are feeling the way they do. Being able to spot and predict if a teen is depressed or may become depressed can be quite tricky. Some of the warning signs that may have suicidal tendencies can be talking about death, self-harm or suicide itself, a change in eating and sleeping patterns, isolation from friends, family and peers (Hurley, 2017). It is especially important to watch out for suicidal tendencies within female teenagers when it comes to isolation from family members and peers. Ellen Chance, a Counselor at Palm Beach school’s states that she sees evidence on a daily basis that stems from online bullying that is affecting her students, particularly females. “I’ve had cases where girls don’t want to come to school and they are cutting themselves and becoming severely depressed because they feel like outcasts and targeted” (Schrobsdorff, 2016, para. 11).

The advancement of technology is just one distinct way that teens can be led to have suicidal tendencies, attempt suicide or eventually end their lives. However, equally matched is the advancement of an individual’s human rights when it comes to their characteristics, gender preference, and body image and presence. “So by NOT suppressing your sexual feelings, which happens to be a central part of one’s identity, you can begin to accept yourself and others as sexual beings, and each a unique individual” (Pavone, 2012, para. 1). As important as it is to figure out who you are if there is not going to be an ample amount of help for your specific preference one may have to go without treatment if they begin to have suicidal pressures. There has not been enough attention among teens who have become suicidal or commit suicide amongst homosexual adolescents. A study created specifically for adolescent psychiatrist’s resulted in over sixty-five percent of them claiming they were not treating homosexual adolescents. Interestingly enough, those who were handling those individuals identified that homosexual teens were at a much higher risk to commit suicide and to have suicidal tendencies. They also agreed that they were in a much more severe position than heterosexual adolescents when it came to suicide. (Kourany, 2010). There seems to be a large disconnect with those at a higher risk of suicidal tendencies, as they are the ones who are not being treated as thoroughly, or at all in most cases. Throughout extensive amounts of research there are very high and increased rates of suicidal tendencies within bisexual, lesbian and gay adolescents. Here, the tables are turned as those who are at a higher risk of suicidal behaviors are males.

They are also more statistically proven to have attempted suicide four times the amount that a heterosexual male has. Many of these tendencies seem to stem from homophobia within school grounds and neighboring areas. Without the assistance and acceptance of the community or the individuals’ family, it can heavily influence and increase suicidal thoughts and feelings (Bagley and Tremblay, 2000, 111). Being able to understand your own individual preferences allows for the adolescent’s sexual identity to form. It is a necessary process that if not created or withheld from society as well as the individual itself, can lead to uncharismatic and harmfully damaging consequences to one’s self-esteem. Hence why having a comfortably accepting environment within schools, households, and communities is important in an attempt to reduce suicidal thoughts and beliefs to form. “In order to have a healthy process of this formation of the self, it is important to allow others to freely express themselves without discrimination (Pavone, 2012, para. 3). Regardless of sexual preference, a major factor that may have adolescents believing that suicide may be their only option for freedom or to ease their unfortunate pain and uncertainty is their household and whether or not guidance and acceptance are shown. Living as a teenager in the United States is not an easy feat. There are many factors that can lead an adolescent to commit suicide. “Suicide occurs in response to multiple biological, psychological, interpersonal, environmental and societal influence that interact with one another, often over time” (Stone et al, 2017, pg. 8).

However, there are certain techniques and procedures that can be done, both by the individual themselves and those around them, that may just help save a life. It is important that the teen feels comfortable enough to be able to talk to someone about what they are feeling. Parents and teachers may find it difficult to communicate with a depressed teen. Adolescents may be pushed away from talking to an adult if the only practical solution they have is said in a judgmental or disbelieving tone, or they state they want to ‘fix’ the problem (Hurley, 2018). Suicide or suicidal thoughts does not only affect the adolescent; it affects the entire family in most cases. Regardless of whether your child may be suicidal, it is a parents’ prerogative to be well informed of what they can do if or when they approach their adolescent on the topic of suicide. There are specific family relationship and parenting skill programs that can enhance parenting skills, family interaction, and help understand a child’s behavioral patterns. “Programs are typically designed for parents or caregivers with children in a specific age range and can be self-directed or delivered to individual families or groups of families (Stone et al, 2017, pg. 31).

This will optimize the chance for a parent’s success in their communication and relational skills with their teen, and prepare them for the opportunity to inform them correctly when it comes to talking about suicide and suicide prevention. Suicide is a very serious problem when it comes to our world today, especially when it involves adolescents. As mentioned, the rates of suicide have fluctuated in the past but have been making quite a large impact within the past few years when it comes to adolescent suicide. There is never one true reasoning behind why one may believe that committing suicide will take away their pain or belief that what they’re doing will be a means to an end.

Adolescents need a safe haven to turn to regardless of what the matter is. If one is not given, the result can be quite consequential and, unfortunately, take the life of a teen who just felt there was no other option. “In closing, and in keeping with a message of resilience as spoken by those who lived experience, ‘hope, help, and healing is possible.” (Stone et al, 2017, pg. 47).

Suicide in the U.S