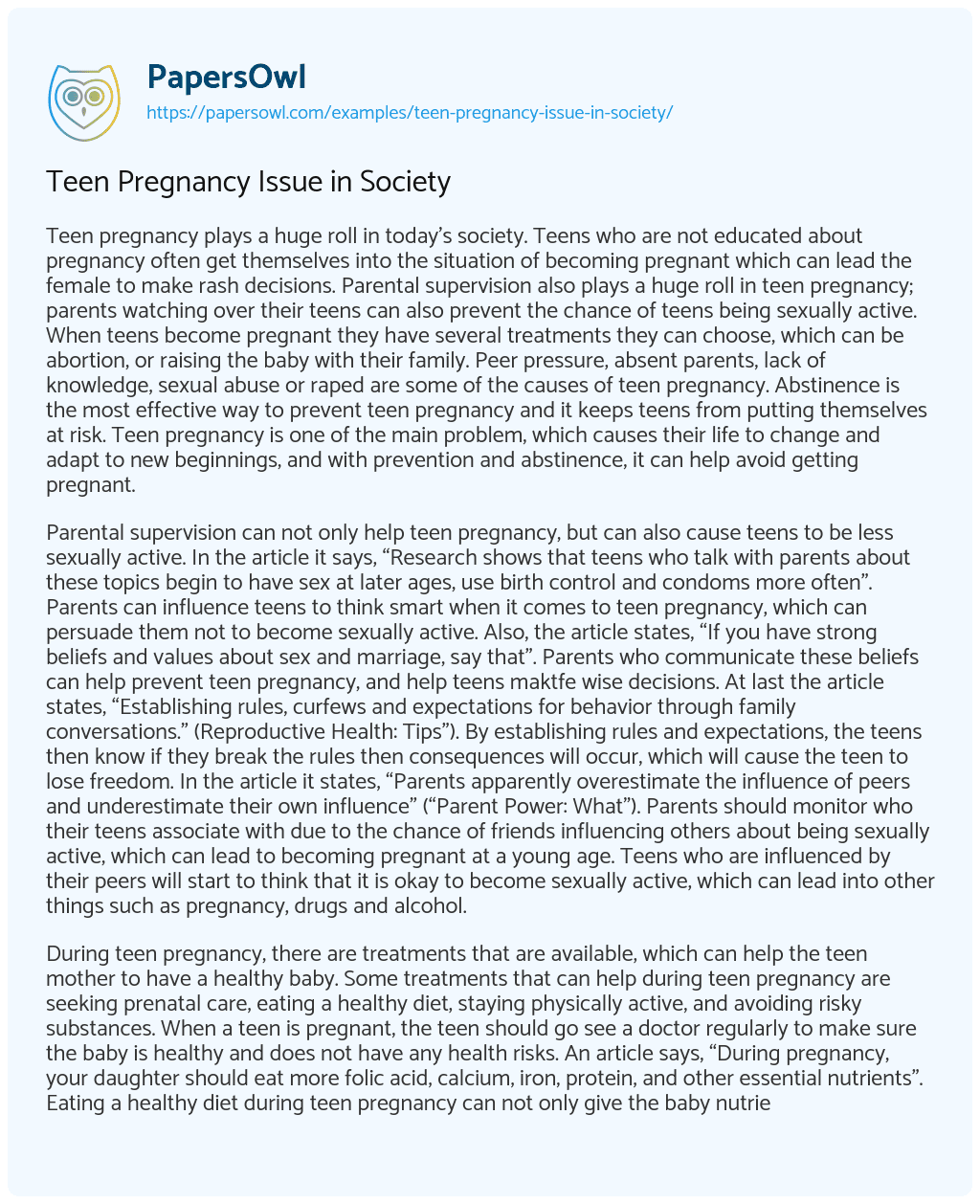 Teen pregnancy plays a huge roll in today’s society. Teens who are not educated about pregnancy often get themselves into the situation of becoming pregnant which can lead the female to make rash decisions. Parental supervision also plays a huge roll in teen pregnancy; parents watching over their teens can also prevent the chance of teens being sexually active. When teens become pregnant they have several treatments they can choose, which can be abortion, or raising the baby with their family. Peer pressure, absent parents, lack of knowledge, sexual abuse or raped are some of the causes of teen pregnancy. Abstinence is the most effective way to prevent teen pregnancy and it keeps teens from putting themselves at risk. Teen pregnancy is one of the main problem, which causes their life to change and adapt to new beginnings, and with prevention and abstinence, it can help avoid getting pregnant.

Parental supervision can not only help teen pregnancy, but can also cause teens to be less sexually active. In the article it says, “Research shows that teens who talk with parents about these topics begin to have sex at later ages, use birth control and condoms more often”. Parents can influence teens to think smart when it comes to teen pregnancy, which can persuade them not to become sexually active. Also, the article states, “If you have strong beliefs and values about sex and marriage, say that”. Parents who communicate these beliefs can help prevent teen pregnancy, and help teens maktfe wise decisions. At last the article states, “Establishing rules, curfews and expectations for behavior through family conversations.” (Reproductive Health: Tips”). By establishing rules and expectations, the teens then know if they break the rules then consequences will occur, which will cause the teen to lose freedom. In the article it states, “Parents apparently overestimate the influence of peers and underestimate their own influence” (“Parent Power: What”). Parents should monitor who their teens associate with due to the chance of friends influencing others about being sexually active, which can lead to becoming pregnant at a young age. Teens who are influenced by their peers will start to think that it is okay to become sexually active, which can lead into other things such as pregnancy, drugs and alcohol.

During teen pregnancy, there are treatments that are available, which can help the teen mother to have a healthy baby. Some treatments that can help during teen pregnancy are seeking prenatal care, eating a healthy diet, staying physically active, and avoiding risky substances. When a teen is pregnant, the teen should go see a doctor regularly to make sure the baby is healthy and does not have any health risks. An article says, “During pregnancy, your daughter should eat more folic acid, calcium, iron, protein, and other essential nutrients”. Eating a healthy diet during teen pregnancy can not only give the baby nutrients, but can also give the mother nutrients as well. Physical activity can also help ease the teens pregnancy, which can cause the teen mother to be more relaxed and have a healthier pregnancy. The article then states, “Alcohol, Tabaco, marijuana and other illegal substances or drugs should be off limits during pregnancy, and that your daughter should consult with her doctor so that he or she can approve each medication you are wanting to take” (“Tween Teen Health”). If the teen mother drinks alcohol or takes any illegal substances, it is not only putting herself at risk but the baby as well., which can lead to complications such as premature birth, and fetal alcohol syndrome. Mothers that also have been exposed to drugs are at a higher risk for Sudden Infant Death syndrome.

Abstinence is the most effective and important way to not become pregnant. In the article it states, “Although many birth control methods can have high rates of success if used properly, they can also fail occasionally” (“Abstinence How Well”). Some sexual diseases can stay in a person’s body which can lead to more spreading if unaware. The only way to avoid receiving any diseases is to not become sexually active. Abstinence can also help prevent any other major health risks. Some teenagers use birth control as an abstinence to help prevent pregnancy. If a teen is not being sexually active, no barriers or pills are needed because the teen is not risking the chance to get pregnant. Teens start to think about becoming sexually active from watching television and peer pressure. Teens should not allow others to put pressure on them about being sexually active. Teen parents should have conversations with their teen about being abstinence because if the teen is not being safe or cautious serious injuries and health risks are high. Some teens choose to not be sexually active because of religious beliefs or morals, and wanting to wait until marriage. If teens believe that being sexually active is wrong, they should speak about how they feel so other teens will not pressure them into doing otherwise.

There are many risks when you are being sexually active, which can lead to major health problems. In the article it states,” Becoming pregnant as a teenager is associated with an increase risk of potentially serious health problems for the mother and the baby”. When a teen is pregnant, the baby’s health can be affected, which can lead to premature birth, and low birth weight. Also, the article states, “Teen mothers are roughly twice as likely to have postpartum depression compared to adult mothers” (“Postpartum Depression”). Teens can often become depressed after giving birth because of them getting pregnant at a young age, which can lead the mother to abuse, and neglect the newborn child. When a teen becomes sexually active, not only is she risking the chance of pregnancy, but she is also risking the chance to receive a sexually transmitted disease, which then can spread to others and cause them to be at risk. If a teenager is taking birth control and does not take the pill correctly then becomes sexually active the pill is not going to a barrier for the teen, which can then lead to not using condoms and cause teen pregnancy. If the mother is smoking, drinking or taking any illegal substances, the baby’s risk of having health problems is increased. An article states, “If a teen has missed their menstrual cycle that can be a classic sign of pregnancy but can also be tricky due to some girl’s periods not being regular (“Medical Risks Realities”). If the teen is missing their period, she should go to the doctor or take a pregnancy test at home. Teens who are pregnant also have a high chance of getting high blood pressure, which can lead to preeclampsia. This can also lead to organ damage and swelling of the teens hands and feet. On the other hand, teen pregnancy can cause the teen to feel alone and isolated. Teens who can’t tell their parents often feel alone. When the family isn’t supportive, pregnant teens tend not to exercise as much which can lead to weight gaining. Teens can also ask for emotional support by getting into a teen mother group or ask their parents. Teens need to be more aware of their surroundings so which they will not have health risks.

Teen pregnancy is very common in teens today. Although teens think that it is okay to have unprotected sex, it is not. Having unprotected sexual intercourse can lead to many different problems. Parental supervision is one of the most important ways to prevent teen pregnancy. Parental supervision can also help teens become less sexually active, which can cause less teens to become pregnant. Parents should also communicate with their teens to know if they are aware of the possibilities that could eventually happen if they are sexually active. Parents who are involved in their teens life can also influence their teens to make smart decisions. Teens also need rules and expectations to follow to prevent any health risks. If a teen becomes pregnant, the teen mother has multiple treatments options that she can choose from. Some treatments that the mother can choose are abortion, adoption, and keeping the baby for herself. A teen mother should also go see a doctor regularly to make sure there are no health concerns or complications and to make sure the baby is growing properly. When a teen is pregnant, the mother should stay away from drugs, alcohol or any illegal substances. If the mother takes any illegal substances the mother is putting the baby and herself in risk. The baby could have birth defects such as premature birth, low birth weight and can cause the baby to have fetal alcohol syndrome or any other syndrome. If a teen does not want to become pregnant, abstinence is the most effective way to prevent pregnancy. Also, teens need to use birth control or condoms to help prevent pregnancy. Teens should also be aware that birth control is not 100% effective. A teen is also risking receiving any type of disease when being sexually active which can affect their lives. Teens need to make wise decisions when becoming sexually active. With that being said, there are multiple ways to prevent pregnancy and teenagers should take that into consideration if they decide to have any sexual intercourse.