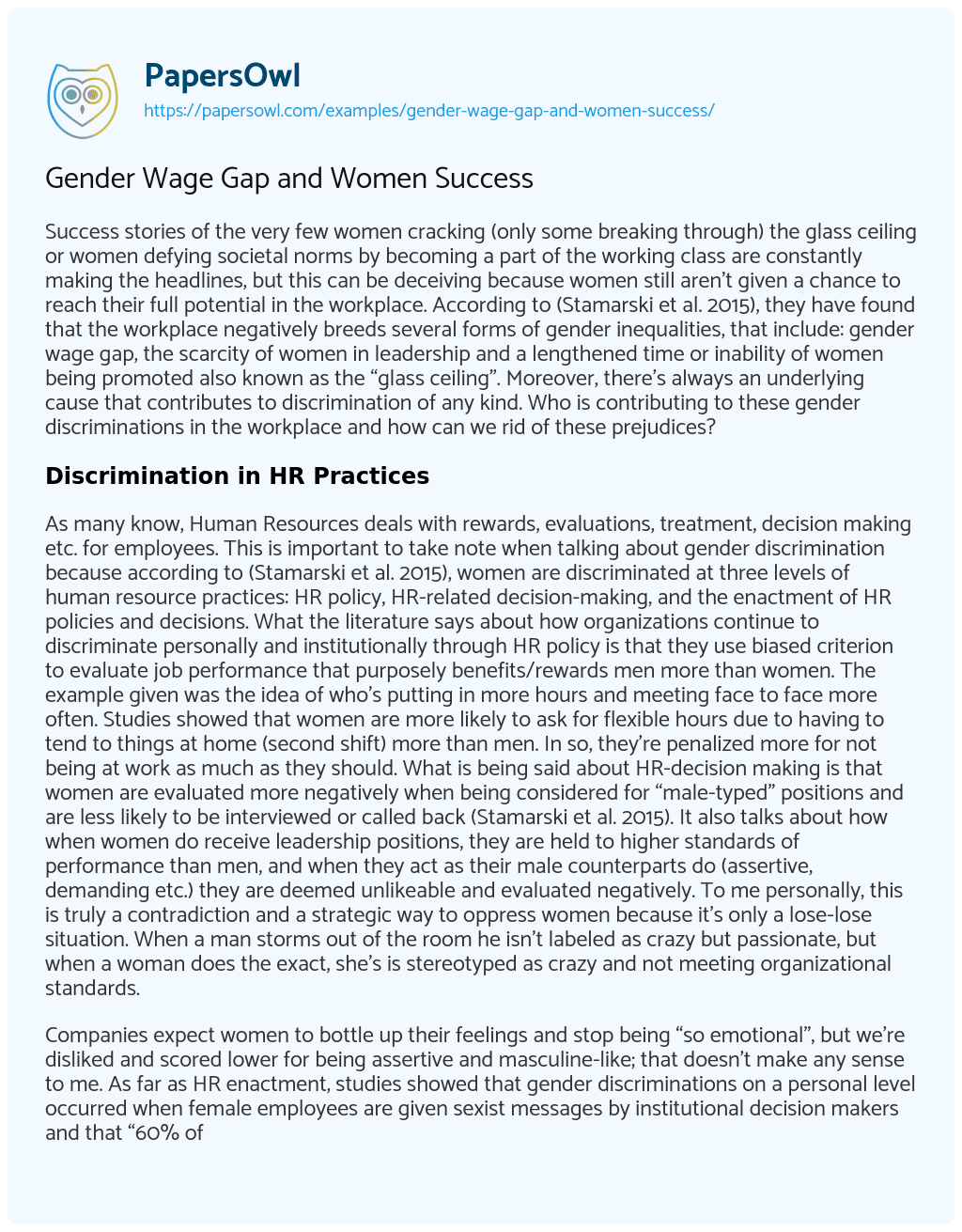 Success stories of the very few women cracking (only some breaking through) the glass ceiling or women defying societal norms by becoming a part of the working class are constantly making the headlines, but this can be deceiving because women still aren’t given a chance to reach their full potential in the workplace. According to (Stamarski et al. 2015), they have found that the workplace negatively breeds several forms of gender inequalities, that include: gender wage gap, the scarcity of women in leadership and a lengthened time or inability of women being promoted also known as the “glass ceiling”. Moreover, there’s always an underlying cause that contributes to discrimination of any kind. Who is contributing to these gender discriminations in the workplace and how can we rid of these prejudices?

As many know, Human Resources deals with rewards, evaluations, treatment, decision making etc. for employees. This is important to take note when talking about gender discrimination because according to (Stamarski et al. 2015), women are discriminated at three levels of human resource practices: HR policy, HR-related decision-making, and the enactment of HR policies and decisions. What the literature says about how organizations continue to discriminate personally and institutionally through HR policy is that they use biased criterion to evaluate job performance that purposely benefits/rewards men more than women. The example given was the idea of who’s putting in more hours and meeting face to face more often. Studies showed that women are more likely to ask for flexible hours due to having to tend to things at home (second shift) more than men. In so, they’re penalized more for not being at work as much as they should. What is being said about HR-decision making is that women are evaluated more negatively when being considered for “male-typed” positions and are less likely to be interviewed or called back (Stamarski et al. 2015). It also talks about how when women do receive leadership positions, they are held to higher standards of performance than men, and when they act as their male counterparts do (assertive, demanding etc.) they are deemed unlikeable and evaluated negatively. To me personally, this is truly a contradiction and a strategic way to oppress women because it’s only a lose-lose situation. When a man storms out of the room he isn’t labeled as crazy but passionate, but when a woman does the exact, she’s is stereotyped as crazy and not meeting organizational standards.

Companies expect women to bottle up their feelings and stop being “so emotional”, but we’re disliked and scored lower for being assertive and masculine-like; that doesn’t make any sense to me. As far as HR enactment, studies showed that gender discriminations on a personal level occurred when female employees are given sexist messages by institutional decision makers and that “60% of gender harassment instances were perpetrated by their supervisor/manager or a person in a leadership role” (Stamarski et al. 2015). Again, women are denied promotions and faced with the sexist let downs of: “you’re not a good fit for the job (male-type position)” or in the case of newly/already pregnant women: “you would’ve gotten the promotion, but you got pregnant”. Pregnancy is such a beautiful thing and the fact that women are vilified and denied opportunities because of it is so callous. I also find it quite sad that these so-called macho/tough men were birthed from a woman themselves and don’t think about their own mothers, grandmothers, sisters, aunts. We should all be more compassionate and considerate of pregnant women and all women, who are wanting and willing to work or are fit for a promotion

Gender Inequalities in the Workplace

A Proposed Solution to the Challenges in Gender Leadership