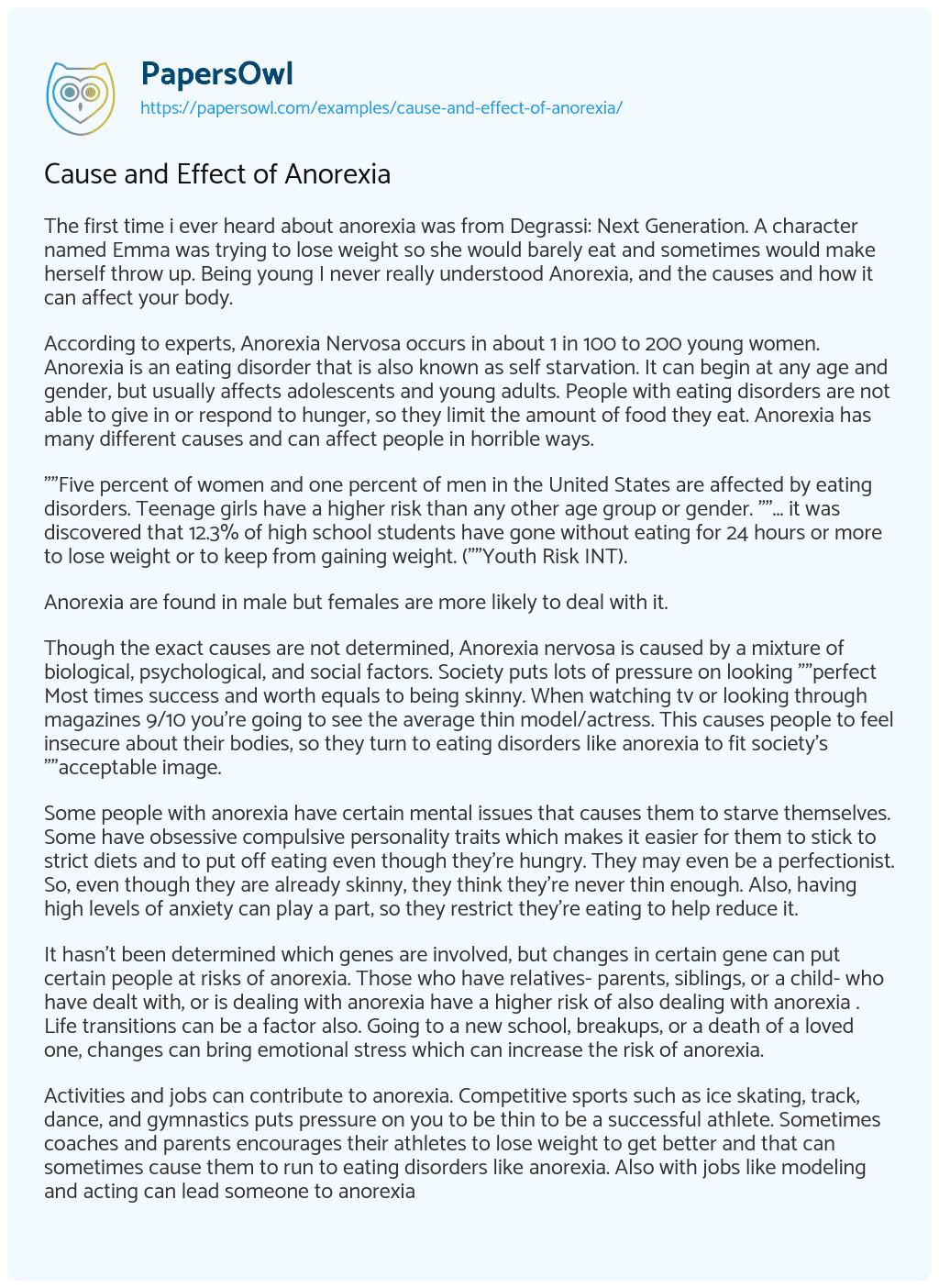 The first time i ever heard about anorexia was from Degrassi: Next Generation. A character named Emma was trying to lose weight so she would barely eat and sometimes would make herself throw up. Being young I never really understood Anorexia, and the causes and how it can affect your body.

According to experts, Anorexia Nervosa occurs in about 1 in 100 to 200 young women. Anorexia is an eating disorder that is also known as self starvation. It can begin at any age and gender, but usually affects adolescents and young adults. People with eating disorders are not able to give in or respond to hunger, so they limit the amount of food they eat. Anorexia has many different causes and can affect people in horrible ways.

“”Five percent of women and one percent of men in the United States are affected by eating disorders. Teenage girls have a higher risk than any other age group or gender. “”… it was discovered that 12.3% of high school students have gone without eating for 24 hours or more to lose weight or to keep from gaining weight. (“”Youth Risk INT).

Anorexia are found in male but females are more likely to deal with it.

Though the exact causes are not determined, Anorexia nervosa is caused by a mixture of biological, psychological, and social factors. Society puts lots of pressure on looking “”perfect Most times success and worth equals to being skinny. When watching tv or looking through magazines 9/10 you’re going to see the average thin model/actress. This causes people to feel insecure about their bodies, so they turn to eating disorders like anorexia to fit society’s “”acceptable image.

Some people with anorexia have certain mental issues that causes them to starve themselves. Some have obsessive compulsive personality traits which makes it easier for them to stick to strict diets and to put off eating even though they’re hungry. They may even be a perfectionist. So, even though they are already skinny, they think they’re never thin enough. Also, having high levels of anxiety can play a part, so they restrict they’re eating to help reduce it.

It hasn’t been determined which genes are involved, but changes in certain gene can put certain people at risks of anorexia. Those who have relatives- parents, siblings, or a child- who have dealt with, or is dealing with anorexia have a higher risk of also dealing with anorexia . Life transitions can be a factor also. Going to a new school, breakups, or a death of a loved one, changes can bring emotional stress which can increase the risk of anorexia.

Activities and jobs can contribute to anorexia. Competitive sports such as ice skating, track, dance, and gymnastics puts pressure on you to be thin to be a successful athlete. Sometimes coaches and parents encourages their athletes to lose weight to get better and that can sometimes cause them to run to eating disorders like anorexia. Also with jobs like modeling and acting can lead someone to anorexia because eyes are always on them and they are willing to do whatever to look good and stay relevant.

Even though anorexics starve themselves they still see themselves as if they are fat. Instead of seeing how sickly skinny they look in the mirror, they see fatness. Anorexia affects the body in many negative ways. Anorexics can’t think right, become moody, irritable, has bad memory, and has changes in brain chemistry. Anorexia causes anemia, which is when the body does not have enough red blood cells, and other blood problems. Anorexics muscles become weak, skin gets dry, bruises easily, and turns yellow. Also kidney failure is possible due to severe dehydration. The most dangerous health problem due to anorexia is the effect of the heart. They have a freakish slow heart rate, low blood pressure, and palpitations, which eventually leads to heart failure, and death becomes a serious possibility. If someone with anorexia becomes extremely malnourished, every organ in the body can be damaged. Damages done may not be curable even if the disorder is under control.

Anorexia is a very serious disease. There are many things that contribute to anorexia and can lead to health complications. Anorexia is a life threatening disease that can cause lifetime struggles.

Cause and Effect of Anorexia. (2019, Feb 13). Retrieved from https://papersowl.com/examples/cause-and-effect-of-anorexia/

Advertising has a Bad Effect on Women, which Leads to Anorexia