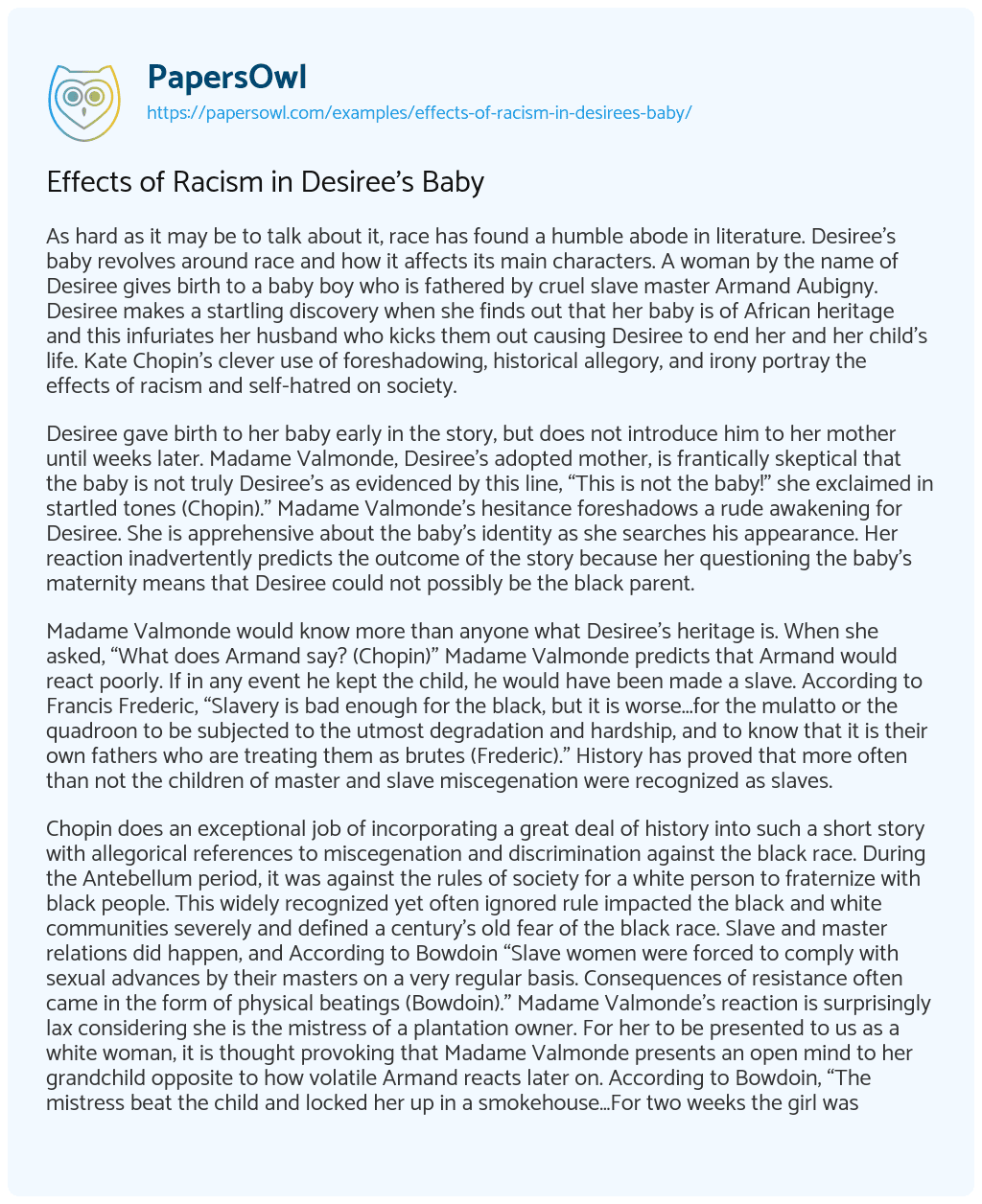 As hard as it may be to talk about it, race has found a humble abode in literature. Desiree’s baby revolves around race and how it affects its main characters. A woman by the name of Desiree gives birth to a baby boy who is fathered by cruel slave master Armand Aubigny. Desiree makes a startling discovery when she finds out that her baby is of African heritage and this infuriates her husband who kicks them out causing Desiree to end her and her child’s life. Kate Chopin’s clever use of foreshadowing, historical allegory, and irony portray the effects of racism and self-hatred on society.

Desiree gave birth to her baby early in the story, but does not introduce him to her mother until weeks later. Madame Valmonde, Desiree’s adopted mother, is frantically skeptical that the baby is not truly Desiree’s as evidenced by this line, “This is not the baby!” she exclaimed in startled tones (Chopin).” Madame Valmonde’s hesitance foreshadows a rude awakening for Desiree. She is apprehensive about the baby’s identity as she searches his appearance. Her reaction inadvertently predicts the outcome of the story because her questioning the baby’s maternity means that Desiree could not possibly be the black parent.

Madame Valmonde would know more than anyone what Desiree’s heritage is. When she asked, “What does Armand say? (Chopin)” Madame Valmonde predicts that Armand would react poorly. If in any event he kept the child, he would have been made a slave. According to Francis Frederic, “Slavery is bad enough for the black, but it is worse…for the mulatto or the quadroon to be subjected to the utmost degradation and hardship, and to know that it is their own fathers who are treating them as brutes (Frederic).” History has proved that more often than not the children of master and slave miscegenation were recognized as slaves.

Chopin does an exceptional job of incorporating a great deal of history into such a short story with allegorical references to miscegenation and discrimination against the black race. During the Antebellum period, it was against the rules of society for a white person to fraternize with black people. This widely recognized yet often ignored rule impacted the black and white communities severely and defined a century’s old fear of the black race. Slave and master relations did happen, and According to Bowdoin “Slave women were forced to comply with sexual advances by their masters on a very regular basis. Consequences of resistance often came in the form of physical beatings (Bowdoin).” Madame Valmonde’s reaction is surprisingly lax considering she is the mistress of a plantation owner. For her to be presented to us as a white woman, it is thought provoking that Madame Valmonde presents an open mind to her grandchild opposite to how volatile Armand reacts later on. According to Bowdoin, “The mistress beat the child and locked her up in a smokehouse…For two weeks the girl was constantly whipped (Bowdoin).” Often times, white mistresses would punish the slave women for being in a relationship with their husbands. The children that came from these relationships were a product of rape, but were often given an advantage over the fully black children. According to Lumen learning, “Planters who had mixed-race children sometimes arranged for their children’s education…Other planters settled property for their children, while others still simply freed their children and their respective mothers’ altogether (Lumen learning).” As it is revealed in the end, Armand is the parent of mixed race, but has inherited his father’s plantation giving him a chance to advance in society. Armand rejects Desiree and his child so vehemently because of this taboo topic of interracial relationship. Armand truly believes that he is white which puts Desiree in a dangerous situation because she is convinced of her alleged mixed-race heritage. For him to accuse her of being black means he believes that being black is wrong and he was afraid of it.

This fear invaded each race differently, forming a pretense of hatred for blackness on both sides. There is this line in the letter, “I thank God for having so arranged our lives that our dear Armand will never know that his mother…belongs to the race that is cursed with the brand of slavery (Chopin).” Mentions of a curse running through the black race have been mentioned in the bible. “Noah had cursed Ham after the Flood was something a great many people believed…Ham’s descendants were black and condemned to slavery (Davis).” Armand had never been exposed to his own black heritage thanks to his parents. His mother is in part to blame for her self-hatred and I presume she married her master according to the letter. Judging by her words, his mother believes it is out of love, but one does not have love in their heart to be able to own another person. To subject a race of people to degradation, subservience, and centuries of trauma for doing nothing more than being in their skin is not love. Yet she sounds honored that her son will never have to know who she is and ultimately who he is himself. The story is an amalgamation of everything wrong with the way that race is perceived.

Mirroring society, the characters were very blunt about where they stood with black and white. White was the beautiful and exceptional race, while black was dirty and undesirable. Armand immediately dismisses Desiree when the truth about their child is revealed. We are told of how cruel he was to his Negro slaves, but never a mention about how he treated the mixed race ones. Mixed race slaves are often put on the sidelines and it is difficult to tell how much harder it was for them emotionally and mentally. Alex Haley documented his grandmothers’ troubled life as the daughter of a white plantation owner and slave mother in the miniseries “Queen”. According to NY times, “Queen is raped, abandoned and run out of town for pretending to be white (NY times).” Mixed race blacks had no definitive identity in a world where their very being was considered illegal. There were no switching sides or accepting both cultures. You could identify as black and find yourself getting being a victim of torturous discrimination. The alternative was to pass as white, considering you possessed the natural features to make you stand in with the rest of them. Like Armand, mixed race blacks who had the ability to pass, did. One example being cartoonist George Herriman, who was not revealed to be mixed until years after his death. According to Kjell Knuddle “To most people he looked white. Only his curly hair might have given him away. It explains why Herriman often wore a hat. Living in a time when black people still had second class status in American society, Herriman took advantage of the confusion (Knuddle).” Herriman risked his life and career by lying about his identity. For someone to have to basically strip themselves of their identity to have a chance at a career, just shows how vile their environment is. The societal influence was very evident in Armand’s reaction to Desiree’s alleged identity. Desiree’s reaction was no better, taking offense to the accusations and making a fatal decision.

Desiree’s life ends in a tragic case of irony. Armand not only has to deal with the loss of his wife and child, but also a life changing discovery. The timing of the discovery is also ironic as he finds out too late in life despite possessing that letter for quite a long time. It is a crushing revelation that Armand discovers too late to repair his family. He has accused his wife of descending from the “cursed race” which damaged her so much so that she felt the need to end her life when it is he who is tainted. It is quite ironic that Desiree, much like Armand’s mother, spared her son a life of subjugation.

Desiree’s baby is a cultural and societal depiction from the mind of Kate Chopin. Chopin demonstrates great knowledge of the way the world of black and white was. There was a difference in both humans beyond skin color. To choose death over life as a black man or woman is heart wrenching yet a reality for many that lived at the time. The struggles of a black person surpassed that of any other race at the time. Chopin displays the factors of long-term trauma that came with the effects of racism and slavery. Each character illustrated the spectrum of personalities as a result of those effects. The fearful in Desiree, the pride less in Armand’s mother, the hateful in Armand, and the compassionate in Madame Valmonde. The main characters of the story are not just individuals, but representatives of a horrific and shameful part of American history.

Effects of Racism in Desiree's Baby. (2019, May 27). Retrieved from https://papersowl.com/examples/effects-of-racism-in-desirees-baby/

Effects of Southern Racism in a Gathering of Old Men