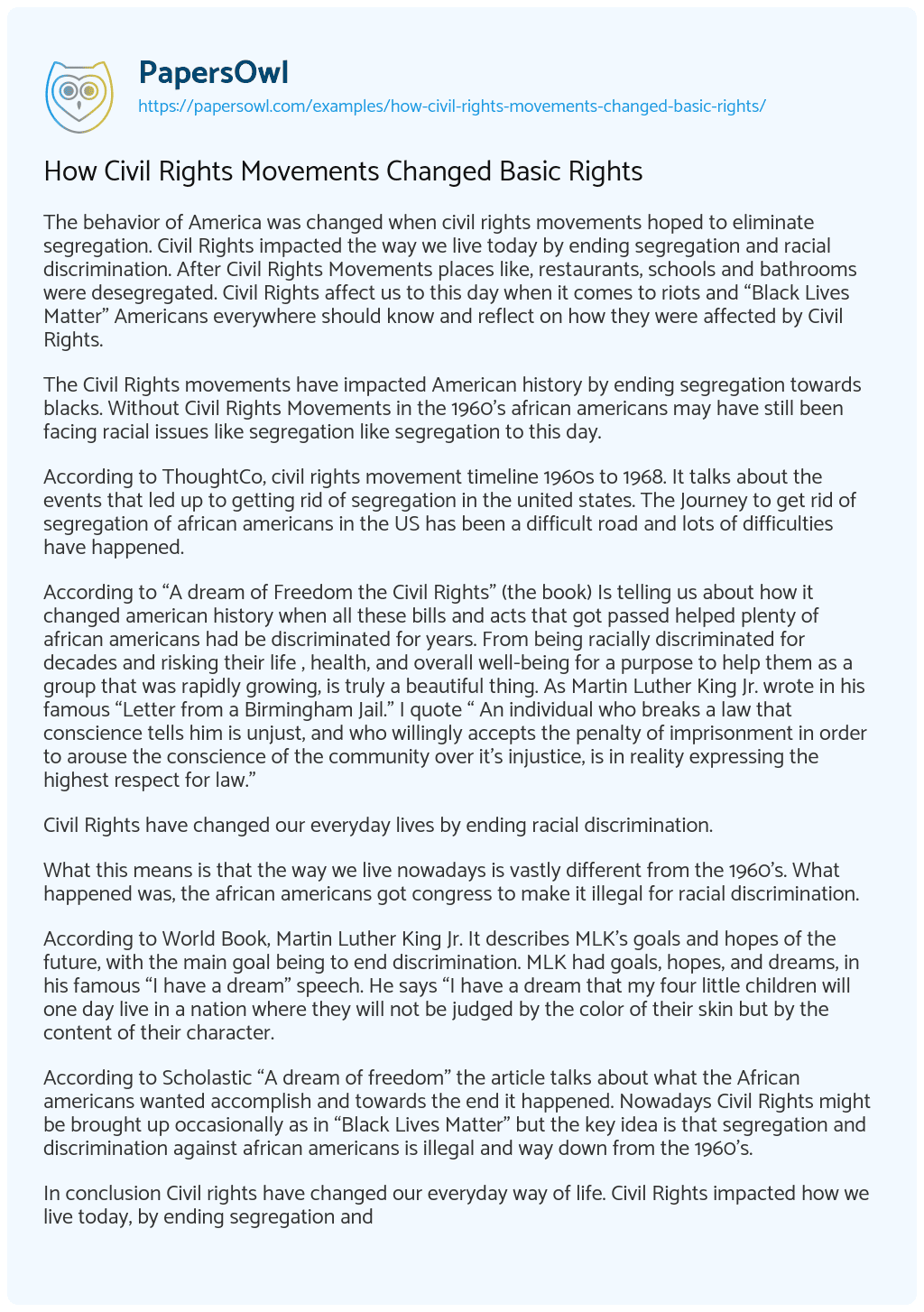 The behavior of America was changed when civil rights movements hoped to eliminate segregation. Civil Rights impacted the way we live today by ending segregation and racial discrimination. After Civil Rights Movements places like, restaurants, schools and bathrooms were desegregated. Civil Rights affect us to this day when it comes to riots and “Black Lives Matter” Americans everywhere should know and reflect on how they were affected by Civil Rights.

According to ThoughtCo, civil rights movement timeline 1960s to 1968. It talks about the events that led up to getting rid of segregation in the united states. The Journey to get rid of segregation of african americans in the US has been a difficult road and lots of difficulties have happened.

According to “A dream of Freedom the Civil Rights” (the book) Is telling us about how it changed american history when all these bills and acts that got passed helped plenty of african americans had be discriminated for years. From being racially discriminated for decades and risking their life , health, and overall well-being for a purpose to help them as a group that was rapidly growing, is truly a beautiful thing. As Martin Luther King Jr. wrote in his famous “Letter from a Birmingham Jail.” I quote “ An individual who breaks a law that conscience tells him is unjust, and who willingly accepts the penalty of imprisonment in order to arouse the conscience of the community over it’s injustice, is in reality expressing the highest respect for law.”

What this means is that the way we live nowadays is vastly different from the 1960’s. What happened was, the african americans got congress to make it illegal for racial discrimination.

According to World Book, Martin Luther King Jr. It describes MLK’s goals and hopes of the future, with the main goal being to end discrimination. MLK had goals, hopes, and dreams, in his famous “I have a dream” speech. He says “I have a dream that my four little children will one day live in a nation where they will not be judged by the color of their skin but by the content of their character.

According to Scholastic “A dream of freedom” the article talks about what the African americans wanted accomplish and towards the end it happened. Nowadays Civil Rights might be brought up occasionally as in “Black Lives Matter” but the key idea is that segregation and discrimination against african americans is illegal and way down from the 1960’s.

In conclusion Civil rights have changed our everyday way of life. Civil Rights impacted how we live today, by ending segregation and discrimination. The Civil rights actions and protests, boycotts have affected American History by ending racial segregation towards african americans. Civil Rights have affected our daily wellbeing by finishing off the abolishment of racial discrimination. To sum it up Civil Rights have conclusively destroyed racism back then and now. People should care about Civil Rights because it effectively got rid of racism and changed the lives of millions of americans.

What is the Civil Rights Movement?