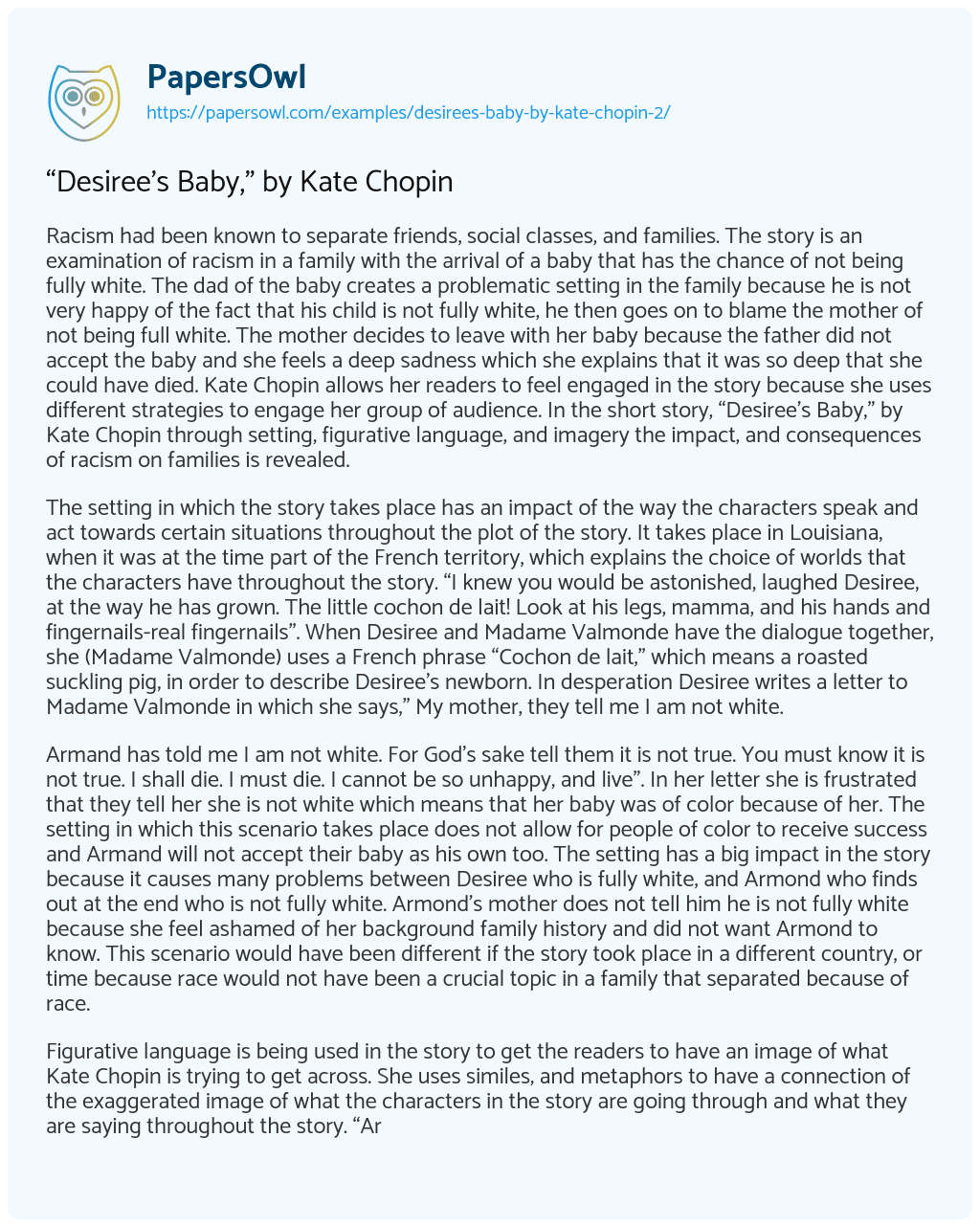 Racism had been known to separate friends, social classes, and families. The story is an examination of racism in a family with the arrival of a baby that has the chance of not being fully white. The dad of the baby creates a problematic setting in the family because he is not very happy of the fact that his child is not fully white, he then goes on to blame the mother of not being full white. The mother decides to leave with her baby because the father did not accept the baby and she feels a deep sadness which she explains that it was so deep that she could have died. Kate Chopin allows her readers to feel engaged in the story because she uses different strategies to engage her group of audience. In the short story, “Desiree’s Baby,” by Kate Chopin through setting, figurative language, and imagery the impact, and consequences of racism on families is revealed.

The setting in which the story takes place has an impact of the way the characters speak and act towards certain situations throughout the plot of the story. It takes place in Louisiana, when it was at the time part of the French territory, which explains the choice of worlds that the characters have throughout the story. “I knew you would be astonished, laughed Desiree, at the way he has grown. The little cochon de lait! Look at his legs, mamma, and his hands and fingernails-real fingernails”. When Desiree and Madame Valmonde have the dialogue together, she (Madame Valmonde) uses a French phrase “Cochon de lait,” which means a roasted suckling pig, in order to describe Desiree’s newborn. In desperation Desiree writes a letter to Madame Valmonde in which she says,” My mother, they tell me I am not white.

Armand has told me I am not white. For God’s sake tell them it is not true. You must know it is not true. I shall die. I must die. I cannot be so unhappy, and live”. In her letter she is frustrated that they tell her she is not white which means that her baby was of color because of her. The setting in which this scenario takes place does not allow for people of color to receive success and Armand will not accept their baby as his own too. The setting has a big impact in the story because it causes many problems between Desiree who is fully white, and Armond who finds out at the end who is not fully white. Armond’s mother does not tell him he is not fully white because she feel ashamed of her background family history and did not want Armond to know. This scenario would have been different if the story took place in a different country, or time because race would not have been a crucial topic in a family that separated because of race.

Figurative language is being used in the story to get the readers to have an image of what Kate Chopin is trying to get across. She uses similes, and metaphors to have a connection of the exaggerated image of what the characters in the story are going through and what they are saying throughout the story. “Armand looked into her eyes and did not care. He was reminded that she was nameless”. In the quote, the metaphor compares a prominent family to a not important family in which this helps the meaning of the phrase because he addresses her with no name even though he can give her a name, but he does not since he was unwilling to come to an agreement. “She turned away like one stunned by a blow, and walked slowly towards the door, hoping he would call her back”. Desiree is processing the courage that Armond has to make her go away even though she has committed her love to him.

She was not able to change his mind and believe that she is not from a mixed ancestry. At the end of the story he finds out that he is the one from a mixed family but does not want to accept it because then all his life would have to be a lie and would also contradict everything that he has said, and done. Figurative language, allows for the readers to be able to in a way, feel what is happening throughout the plot, and allows for visual representations. Imagery has an important role in the story because there are a lot of visuals that are described all throughout which add debt to the reading. “The roof came down steep and black like a cowl, reaching out beyond the wide galleries that encircled the yellow stuccoed house. Big, solemn oaks grew close to it, and their thick-leaved, far-reaching branches shadowed it like a pall”. In the quote the cowl that was surrounding Armand’s house is a representation of his style of commands and his control over the slaves, and women. The image of the house represents the essence of the owner, and the way in which their lifestyle is, which sets the tone as an ominous mood in the story.

“It was a cry that she could not help; which she was not conscious of having uttered. The blood turned like ice in her veins, and a clammy moisture gathered upon her face”. Desiree sees that there is something strange about her baby’s appearance and with the way in which Chopin describes the scenario the reader can visualize how Desiree is acting and feeling. Desiree communicates to the reader a worry towards her baby because she thinks that Armond is not mixed and her ancestry is not mixed, so this creates a confused state of mind for her because she doesn’t know how it could be possible that her baby does not have a white complexion. This scene sets Desiree to see and analyze the reason why Armand has changed his behavior.