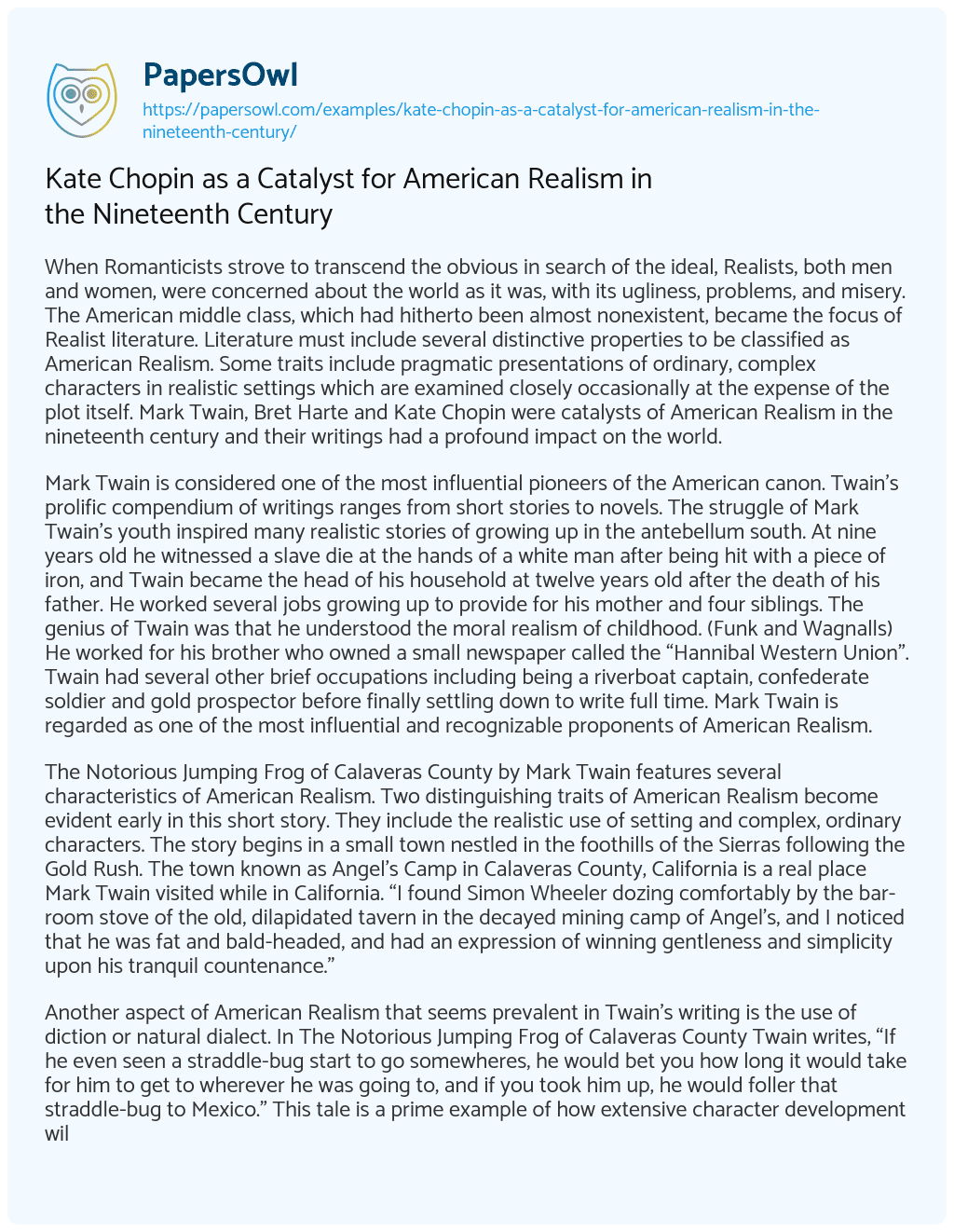 When Romanticists strove to transcend the obvious in search of the ideal, Realists, both men and women, were concerned about the world as it was, with its ugliness, problems, and misery. The American middle class, which had hitherto been almost nonexistent, became the focus of Realist literature. Literature must include several distinctive properties to be classified as American Realism. Some traits include pragmatic presentations of ordinary, complex characters in realistic settings which are examined closely occasionally at the expense of the plot itself. Mark Twain, Bret Harte and Kate Chopin were catalysts of American Realism in the nineteenth century and their writings had a profound impact on the world.

Mark Twain is considered one of the most influential pioneers of the American canon. Twain’s prolific compendium of writings ranges from short stories to novels. The struggle of Mark Twain’s youth inspired many realistic stories of growing up in the antebellum south. At nine years old he witnessed a slave die at the hands of a white man after being hit with a piece of iron, and Twain became the head of his household at twelve years old after the death of his father. He worked several jobs growing up to provide for his mother and four siblings. The genius of Twain was that he understood the moral realism of childhood. (Funk and Wagnalls) He worked for his brother who owned a small newspaper called the “Hannibal Western Union”. Twain had several other brief occupations including being a riverboat captain, confederate soldier and gold prospector before finally settling down to write full time. Mark Twain is regarded as one of the most influential and recognizable proponents of American Realism.

The Notorious Jumping Frog of Calaveras County by Mark Twain features several characteristics of American Realism. Two distinguishing traits of American Realism become evident early in this short story. They include the realistic use of setting and complex, ordinary characters. The story begins in a small town nestled in the foothills of the Sierras following the Gold Rush. The town known as Angel’s Camp in Calaveras County, California is a real place Mark Twain visited while in California. “I found Simon Wheeler dozing comfortably by the bar-room stove of the old, dilapidated tavern in the decayed mining camp of Angel’s, and I noticed that he was fat and bald-headed, and had an expression of winning gentleness and simplicity upon his tranquil countenance.”

Another aspect of American Realism that seems prevalent in Twain’s writing is the use of diction or natural dialect. In The Notorious Jumping Frog of Calaveras County Twain writes, “If he even seen a straddle-bug start to go somewheres, he would bet you how long it would take for him to get to wherever he was going to, and if you took him up, he would foller that straddle-bug to Mexico.” This tale is a prime example of how extensive character development will often eclipse the plot. Simon Wheeler and Jim Smiley are presented realistically with emotions and motives and they are more important than the plot. The combination of realistic characters, setting and the weak, plausible plot epitomize the criteria for American Realism.

Another ambassador of the American Realist movement was Bret Harte. Harte, an avant-garde writer utilized several aspects from both American realism and local color writing. Born in Albany, New York in 1836, Harte grew up to be one of the most influential advocates of Realism in America. Bret Harte began writing at eleven years old and finished school at the age of thirteen. Harte’s writings tend to feature romantic figures of the California Gold Rush. In addition to working as a miner, teacher and journalist, Harte guarded stagecoaches for a short time for Wells Fargo. Harte’s short story ‘The Luck of Roaring Camp’ features several components of American Realism.

‘The Luck of Roaring Camp’ is set in a destitute, fictious mining camp in Northern California lacking law and sobriety. The settlement was comprised of desperados, callous miners and a lone woman, Cherokee Sal. Harte utilized irony in his vivid descriptions of the men. Harte wrote “The coolest, most courageous man was scarcely over five feet in height, with a soft voice and timid and embarrassed manner. The strongest man had but three fingers on his right hand; the best shot had but one eye.” These men are romanticized stereotypes in an impoverished gold rush mining camp and help to portray the realism of life in these towns. Another example of realism in this story is the element of social class. While the characters may all be considered impoverished and lower class, there is still a hierarchy within the camp in terms of character and honor. The camp is destroyed by a devastating flood, possibly inspired by the Great Flood of 1862 in California.

Kate Chopin is another prominent American writer best known for her stories about strong, independent women. Born in St. Louis, Missouri in 1850, Kate had 4 siblings that all died before the age of 25. Kate Chopin was raised by smart, independent, single women. She attended the school of Sacred Heart and acquired an early interest in French and English literature. Chopin’s short story “Desiree’s Baby” includes several characteristics of American Realism. Kate Chopin’s writings helped establish the foundation for the Women’s Civil Rights movement in the United States.

“Desiree’s Baby” takes place in the bayous of Louisiana before the American Civil War and includes components of irony, racism, realism and tragedy. The realistic setting and characters are key variables of realism. Desiree was treated like many women during the 19th century. She believed in submitting to her husband, which is included in the Cult of True Womanhood. The finale of the short story reveals to the reader that Armand was in fact the one of mixed racial descent after he found a letter from his late mother. “But, above all,” she wrote, “night and day, I thank the good God for having so arranged our lives that our dear Armand will never know that his mother, who adores him, belongs to the race that is cursed with the brand of slavery.”  Slavery and instances of racism in the antebellum south were accurately portrayed in this story which is a characteristic of realism.

While Desiree did not rebel against the Cult of True Womanhood she did however, raise awareness for equal rights and independence for women trapped in misogynistic environments. Mark Twain, Bret Harte and Kate Chopin were the catalysts for the American Realism movement. Their works contained key aspects of realism which helped define what it means to write realistically. These stories and many others helped pave the way for the eradication of racism and garner support for the women’s civil rights movement. American Realism is a style of writing that is well known and indicative of American culture in late nineteenth century.

Kate Chopin as a Catalyst for American Realism in the Nineteenth Century. (2022, Jun 26). Retrieved from https://papersowl.com/examples/kate-chopin-as-a-catalyst-for-american-realism-in-the-nineteenth-century/