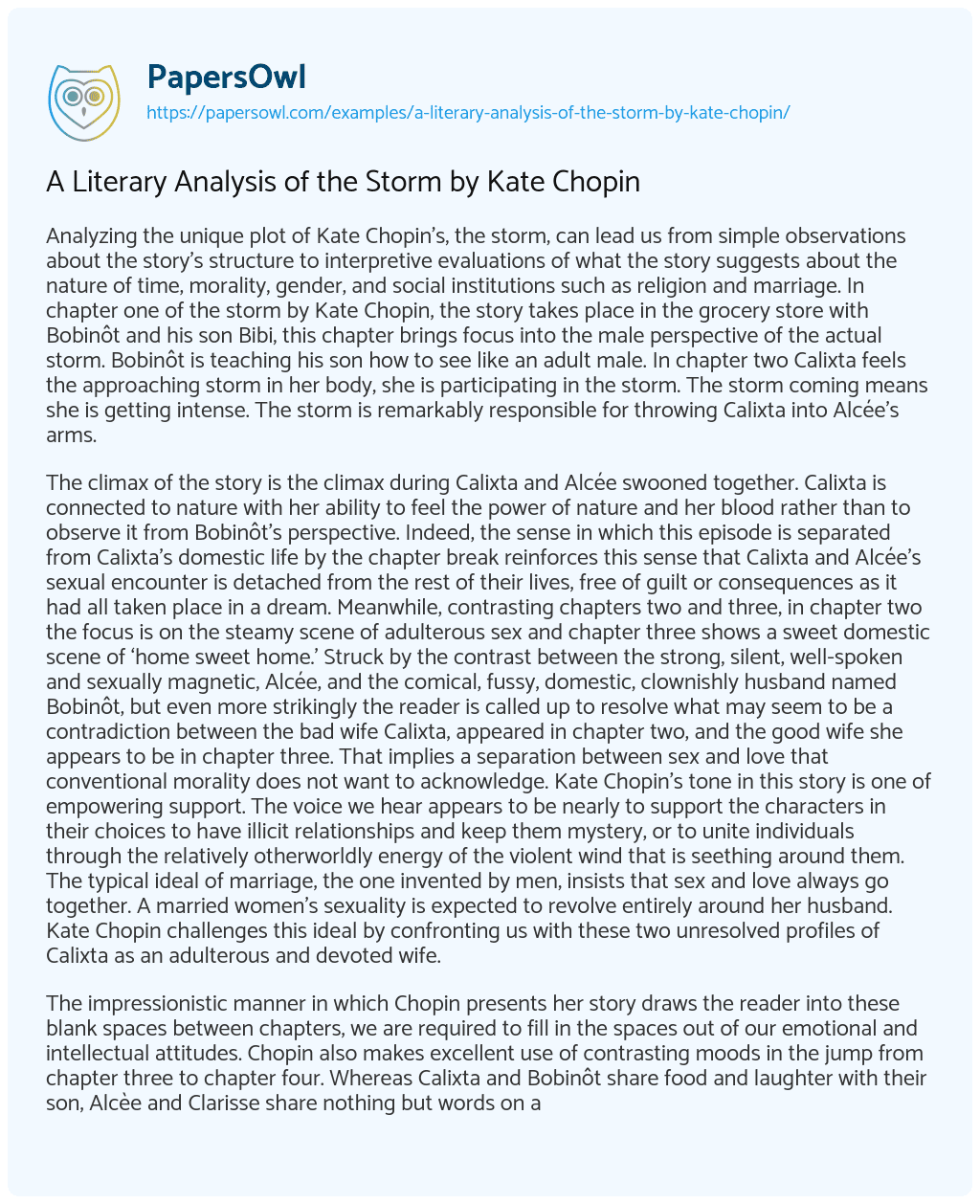 Analyzing the unique plot of Kate Chopin’s, the storm, can lead us from simple observations about the story’s structure to interpretive evaluations of what the story suggests about the nature of time, morality, gender, and social institutions such as religion and marriage. In chapter one of the storm by Kate Chopin, the story takes place in the grocery store with Bobinôt and his son Bibi, this chapter brings focus into the male perspective of the actual storm. Bobinôt is teaching his son how to see like an adult male. In chapter two Calixta feels the approaching storm in her body, she is participating in the storm. The storm coming means she is getting intense. The storm is remarkably responsible for throwing Calixta into Alcée’s arms.

The climax of the story is the climax during Calixta and Alcée swooned together. Calixta is connected to nature with her ability to feel the power of nature and her blood rather than to observe it from Bobinôt’s perspective. Indeed, the sense in which this episode is separated from Calixta’s domestic life by the chapter break reinforces this sense that Calixta and Alcée’s sexual encounter is detached from the rest of their lives, free of guilt or consequences as it had all taken place in a dream. Meanwhile, contrasting chapters two and three, in chapter two the focus is on the steamy scene of adulterous sex and chapter three shows a sweet domestic scene of ‘home sweet home.’ Struck by the contrast between the strong, silent, well-spoken and sexually magnetic, Alcée, and the comical, fussy, domestic, clownishly husband named Bobinôt, but even more strikingly the reader is called up to resolve what may seem to be a contradiction between the bad wife Calixta, appeared in chapter two, and the good wife she appears to be in chapter three. That implies a separation between sex and love that conventional morality does not want to acknowledge. Kate Chopin’s tone in this story is one of empowering support. The voice we hear appears to be nearly to support the characters in their choices to have illicit relationships and keep them mystery, or to unite individuals through the relatively otherworldly energy of the violent wind that is seething around them. The typical ideal of marriage, the one invented by men, insists that sex and love always go together. A married women’s sexuality is expected to revolve entirely around her husband. Kate Chopin challenges this ideal by confronting us with these two unresolved profiles of Calixta as an adulterous and devoted wife.

The impressionistic manner in which Chopin presents her story draws the reader into these blank spaces between chapters, we are required to fill in the spaces out of our emotional and intellectual attitudes. Chopin also makes excellent use of contrasting moods in the jump from chapter three to chapter four. Whereas Calixta and Bobinôt share food and laughter with their son, Alcèe and Clarisse share nothing but words on a page, their relationship is completely disembodied and completely intellectual. More than whatever else, Chopin’s style in the storm is one of smoothness. She advances easily and quickly not just among the five characters’ perspectives. Bibi, Bobinôt, Calixta, Alcée, and Clarisse, yet through an unequivocal sexual experience and its outcome. One thing that emerges here, obviously, is the way that the storm is occurring amid the vital sexualized scene, keeping Alcée and Calixta inside the house, and Bobinôt and Bibi outside of it. At the point when the storm disseminates, Alcée and Calixta must differ their ways, apparently for their experience. At the point when Bobinôt arrives his own particular home, he has no clue about the torrid experience that simply occurred there. Clarisse, as well, is clueless as to what occurred. Notwithstanding arranging a misleading demonstration, and keeping every one of her characters’ privileged insights, she likewise moves smoothly forward and backward between various types of dialect. In this section, for instance, she easily joins two altogether different methods for talking: the vernacular Bobinôt uses to address his child and the modern dialect the storyteller uses to recount the story.

That last sentence of the story “so the storm past and everyone was happy,” is a kind of parody of the happily ever after ending found in fairytale marriages. The first half of the sentence “the storm passed” echoes the mood of discontinuity created by the story’s brief chapters, the meteorological storm and the emotional story both come and go without leaving any wreckage or devastation. Ordinarily, we tend to think of life as an accumulation of experiences like a snowball that grows and changes shape as it rolls downhill, every action has a reaction, every sin is followed in a just world by punishment, live and learn, but this story brings us into a world where this perpetual cycle of cause and effect is interrupted by those blank spaces between each chapter rather than representing time as a chain of continuous experiences. The storm represents time as the sequence of isolated moments which come and go like rain or thunder. The second half of the final sentence “and everyone was happy” requires us to revisit each of the five characters in the story and consider the different senses in which each character can be said to be happy. This mental activity requires us to recognize that happiness is not some universal state but may take a different shape for different people. This discontinuity in the story’s plot signifies, therefore, not only the discontinuity in the experience of but also the discontinuity between different people. A diversity of experience throws a monkey wrench into our attempts to judge all people by a single standard of morality. The story is hence flawlessly tied up in a bow. Nobody will get some answers concerning all the activities that simply happened. Alcée and Calixta’s mystery is formally protected, dispersing similarly as the tempest itself has. Regardless of whether alternate characters speculate some change is a different issue. At the consummation of the story, all is well.

A Literary Analysis of the Storm by Kate Chopin. (2021, Jul 04). Retrieved from https://papersowl.com/examples/a-literary-analysis-of-the-storm-by-kate-chopin/

The Storm the Historic and Cultura