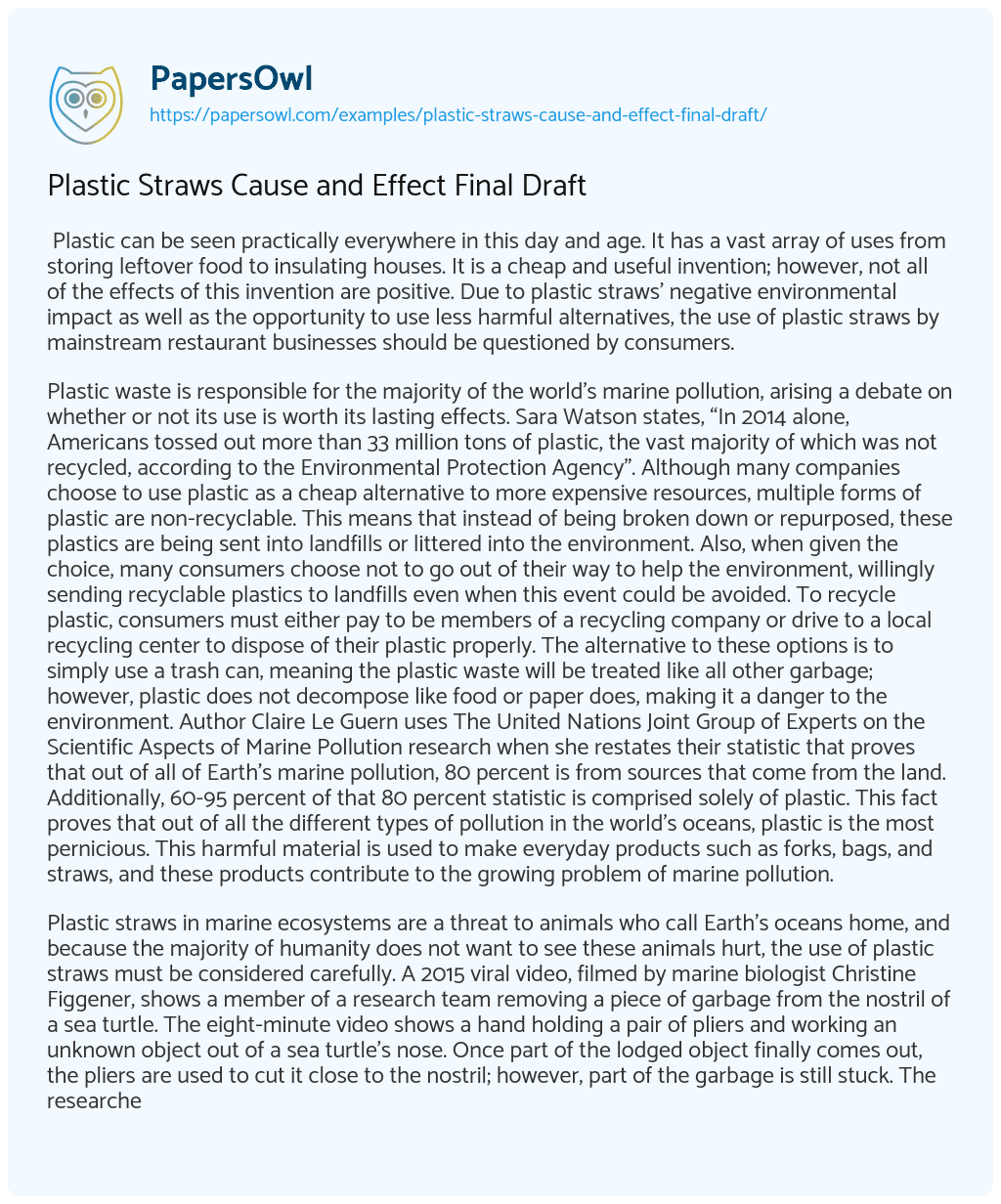 Plastic can be seen practically everywhere in this day and age. It has a vast array of uses from storing leftover food to insulating houses. It is a cheap and useful invention; however, not all of the effects of this invention are positive. Due to plastic straws’ negative environmental impact as well as the opportunity to use less harmful alternatives, the use of plastic straws by mainstream restaurant businesses should be questioned by consumers.

Plastic waste is responsible for the majority of the world’s marine pollution, arising a debate on whether or not its use is worth its lasting effects. Sara Watson states, “In 2014 alone, Americans tossed out more than 33 million tons of plastic, the vast majority of which was not recycled, according to the Environmental Protection Agency”. Although many companies choose to use plastic as a cheap alternative to more expensive resources, multiple forms of plastic are non-recyclable. This means that instead of being broken down or repurposed, these plastics are being sent into landfills or littered into the environment. Also, when given the choice, many consumers choose not to go out of their way to help the environment, willingly sending recyclable plastics to landfills even when this event could be avoided. To recycle plastic, consumers must either pay to be members of a recycling company or drive to a local recycling center to dispose of their plastic properly. The alternative to these options is to simply use a trash can, meaning the plastic waste will be treated like all other garbage; however, plastic does not decompose like food or paper does, making it a danger to the environment. Author Claire Le Guern uses The United Nations Joint Group of Experts on the Scientific Aspects of Marine Pollution research when she restates their statistic that proves that out of all of Earth’s marine pollution, 80 percent is from sources that come from the land. Additionally, 60-95 percent of that 80 percent statistic is comprised solely of plastic. This fact proves that out of all the different types of pollution in the world’s oceans, plastic is the most pernicious. This harmful material is used to make everyday products such as forks, bags, and straws, and these products contribute to the growing problem of marine pollution.

Plastic straws in marine ecosystems are a threat to animals who call Earth’s oceans home, and because the majority of humanity does not want to see these animals hurt, the use of plastic straws must be considered carefully. A 2015 viral video, filmed by marine biologist Christine Figgener, shows a member of a research team removing a piece of garbage from the nostril of a sea turtle. The eight-minute video shows a hand holding a pair of pliers and working an unknown object out of a sea turtle’s nose. Once part of the lodged object finally comes out, the pliers are used to cut it close to the nostril; however, part of the garbage is still stuck. The researcher continues to pry out the object as the turtle cries out in pain and blood drips from its nose until, at last, the piece of trash comes out. The viewer can finally see the cause of the turtle’s suffering– a plastic straw (Figgener 0:10-7:58). Claire Le Guern shows the extent of the repercussions that plastic causes when she uses Greenpeace’s findings that state, “at least 267 different animal species are known to have suffered from entanglement and ingestion of plastic debris”. She elaborates on the effects of plastic by also using the findings of the National Oceanographic and Atmospheric Administration which estimate that plastic waste is responsible for killing roughly 100,000 marine mammals each year. (Le Guern). This number does not include the number of reptiles, birds, and fish that also lose their lives to plastic pollution annually. Many consumers do not think of what happens to their plastic straws after they are thrown away. This typically unintentional lack of consideration causes marine animals’ lives all across the world to be put at risk. Being able to cut off this source of pollution would make the Earth’s oceans safer for all who enter it.

Making the change from plastic straws to their less harmful alternatives is achievable, and it may start a revolution towards abandoning other plastic pollutants. The beginning of the extermination of plastic straws is receiving primarily positive feedback on social media, and Seattle’s citywide ban on them as well as Starbucks’ announcement to work towards no longer using them at all will likely inspire other cities and businesses to make the change as well (Danovich). Starbucks is not the only big-name business abandoning plastic straws. Another one of the most popular restaurant chains in the world has also started taking steps towards running a greener business. McDonald’s is used by Watson as an example. She informs the reader that the popular fast-food chain has started using paper straws on an experimental trial in some of its overseas locations. She also uses a quote from an expert who is the co-founder of a nonprofit whose aim is to limit plastic pollution. She states, “He says straws are part of a larger movement to reduce the use of plastics in our daily lives. ‘Straws are just the next of many,’ Eriksen says. ‘Microbeads, plastic bags, Styrofoam — they’re all on the way out’” (Watson). The recognition of plastic pollution has sparked a movement to not only prevent even more plastic straws from entering the environment but other plastic products as well.

Although the negative effects of plastic straws have begun to be publicly recognized, there are still some who are not in favor of abandoning them. One such group of people is the disabled community. This community explains its lack of support by elaborating on why it feels plastic straws should remain available by stating:

Paper straws and similar biodegradable options often fall apart too quickly or are easy for people with limited jaw control to bite through. Silicone straws are often not flexible — one of the most important features for people with mobility challenges. Reusable straws need to be washed, which not all people with disabilities can do easily. And metal straws, which conduct heat and cold in addition to being hard and inflexible, can pose a safety risk. (Danovich)

These side-effects of the plastic alternatives are likely overlooked by those without a disability, but they pose real issues for people living with a handicap. In response, the movement for banning plastic straws makes the case that there are multiple, less harmful substitutions for plastic when it comes to making straws. Another author names these other options when she states, “Some companies are exploring alternatives to plastic straws made of paper or wood. Other businesses have gotten creative… [using] compostable, edible pasta in place of plastic straws. There are also reusable straws made of silicone, glass, and metal on the market” (Watson). Although some of these options were refuted by the disabled community, some were not. The destruction that the non-recyclable straws cause combined with the ever-growing possibilities of plastic replacements weaken the disabled communities’ case that plastic should be kept. Though the alternatives may not be as convenient as plastic, they ultimately result in a healthier future for everyone’s planet.

Plastic straws have been proven to harm the environment, thus multiple alternatives have been suggested to take their place. Though some claim that these substitutions arise their own issues within smaller communities, they are less dire than the harm that plastic waste causes across Earth each year. Answers such as straws made of wood or edible materials have been proposed as solutions to the problems that plastic waste causes. The possibility of using these non-harmful straws combined with the negatives that plastic straws inflict provides consumers with a reason to reconsider a choice that they may not have even realized they were making.

Plastic in the Environment

The Negative Effect of Single Use Plastic

Plastic Pollution and its Effect on the Thermal Capacity of Seawater

Our Planet is Drowning in Plastic Pollution