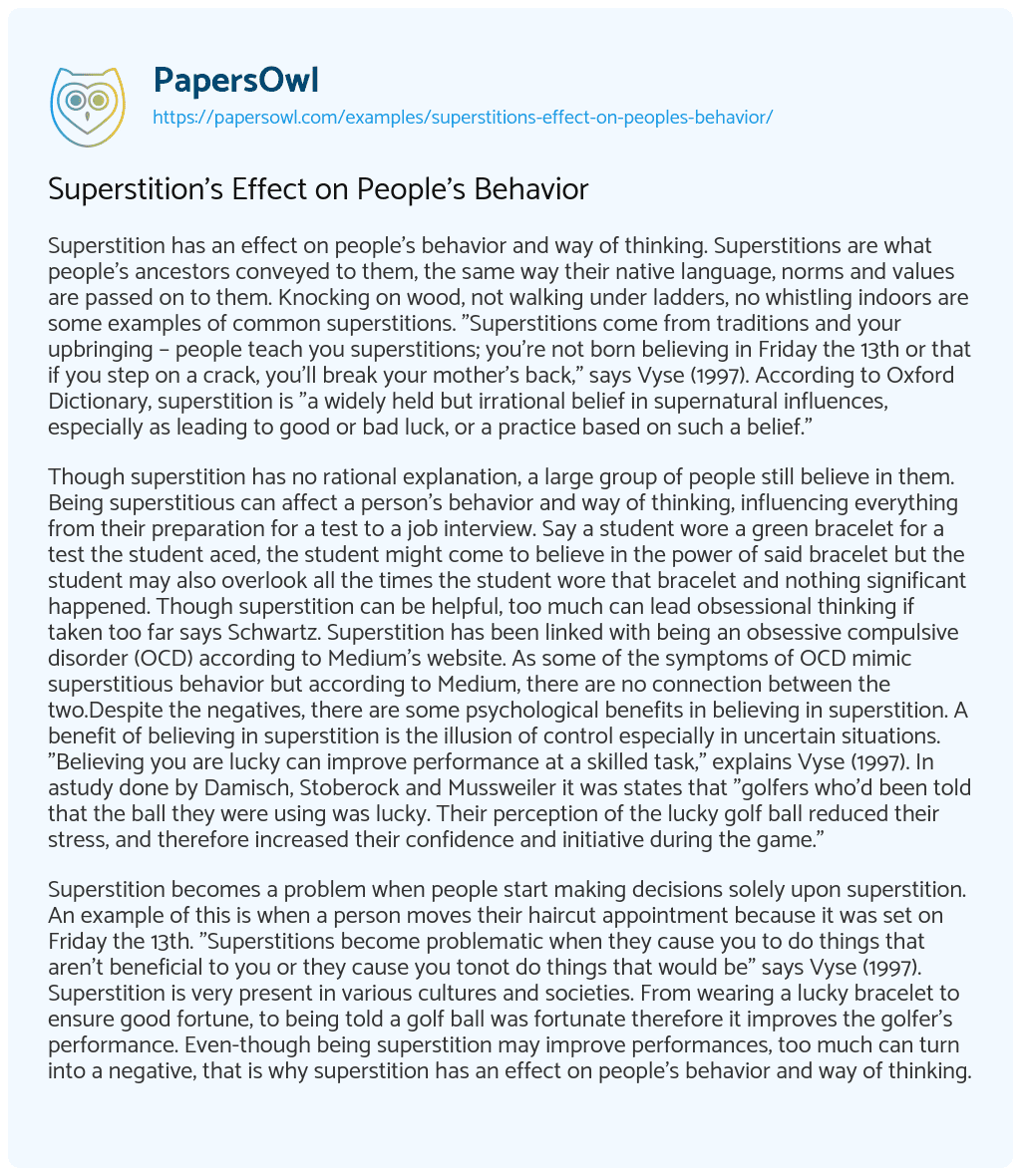 Superstition has an effect on people’s behavior and way of thinking. Superstitions are what people’s ancestors conveyed to them, the same way their native language, norms and values are passed on to them. Knocking on wood, not walking under ladders, no whistling indoors are some examples of common superstitions. “Superstitions come from traditions and your upbringing – people teach you superstitions; you’re not born believing in Friday the 13th or that if you step on a crack, you’ll break your mother’s back,” says Vyse (1997). According to Oxford Dictionary, superstition is “a widely held but irrational belief in supernatural influences, especially as leading to good or bad luck, or a practice based on such a belief.”

Though superstition has no rational explanation, a large group of people still believe in them. Being superstitious can affect a person’s behavior and way of thinking, influencing everything from their preparation for a test to a job interview. Say a student wore a green bracelet for a test the student aced, the student might come to believe in the power of said bracelet but the student may also overlook all the times the student wore that bracelet and nothing significant happened. Though superstition can be helpful, too much can lead obsessional thinking if taken too far says Schwartz. Superstition has been linked with being an obsessive compulsive disorder (OCD) according to Medium’s website. As some of the symptoms of OCD mimic superstitious behavior but according to Medium, there are no connection between the two.Despite the negatives, there are some psychological benefits in believing in superstition. A benefit of believing in superstition is the illusion of control especially in uncertain situations. “Believing you are lucky can improve performance at a skilled task,” explains Vyse (1997). In astudy done by Damisch, Stoberock and Mussweiler it was states that “golfers who’d been told that the ball they were using was lucky. Their perception of the lucky golf ball reduced their stress, and therefore increased their confidence and initiative during the game.”

Superstition becomes a problem when people start making decisions solely upon superstition. An example of this is when a person moves their haircut appointment because it was set on Friday the 13th. “Superstitions become problematic when they cause you to do things that aren’t beneficial to you or they cause you tonot do things that would be” says Vyse (1997). Superstition is very present in various cultures and societies. From wearing a lucky bracelet to ensure good fortune, to being told a golf ball was fortunate therefore it improves the golfer’s performance. Even-though being superstition may improve performances, too much can turn into a negative, that is why superstition has an effect on people’s behavior and way of thinking.

How Superstition has Evolved Since the 19th Century

Science and Superstition in the Elizabethan Era

The Impact of Luck and Superstition in Decision Making

Superstitions and Rituals in Sport