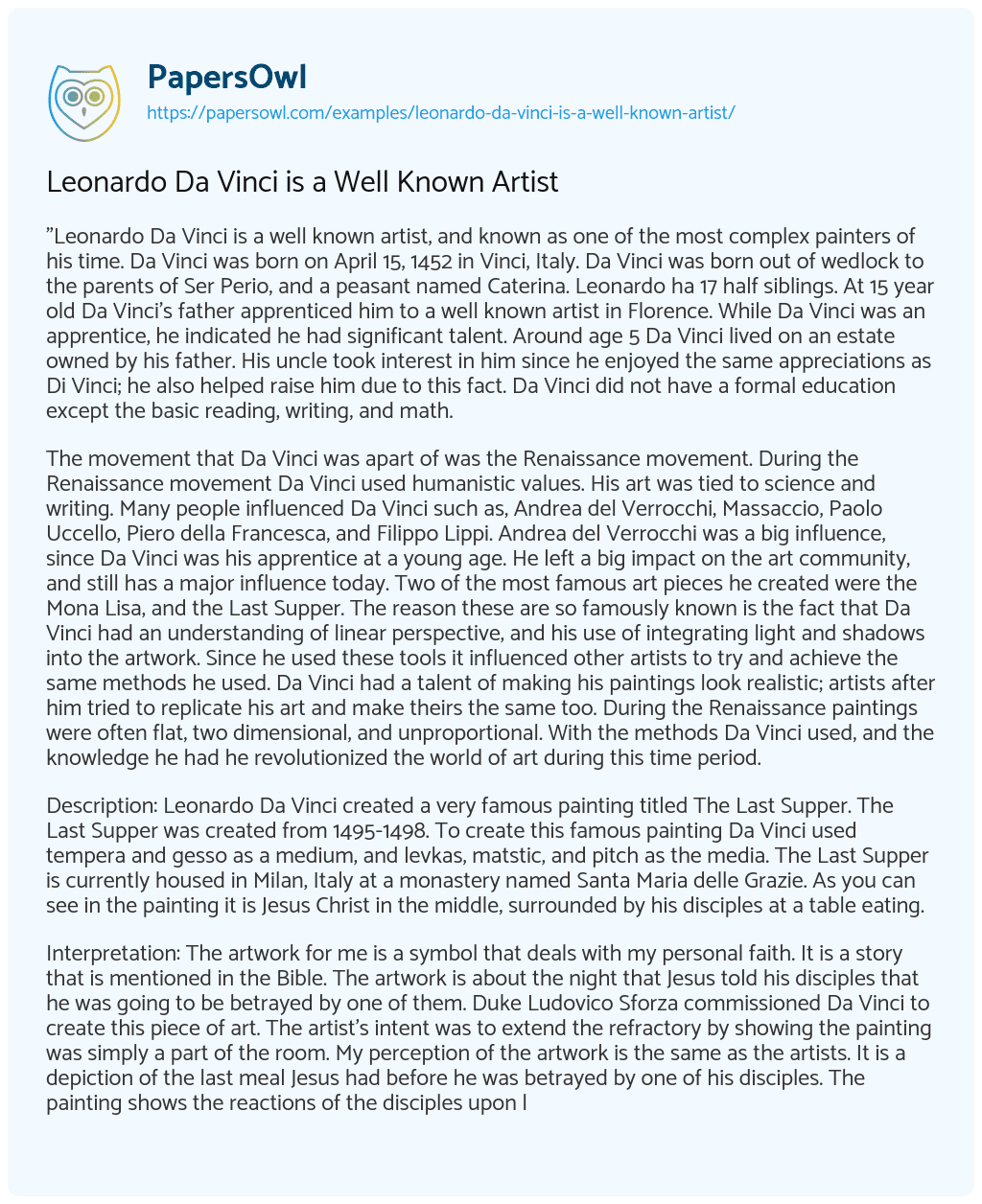 “Leonardo Da Vinci is a well known artist, and known as one of the most complex painters of his time. Da Vinci was born on April 15, 1452 in Vinci, Italy. Da Vinci was born out of wedlock to the parents of Ser Perio, and a peasant named Caterina. Leonardo ha 17 half siblings. At 15 year old Da Vinci’s father apprenticed him to a well known artist in Florence. While Da Vinci was an apprentice, he indicated he had significant talent. Around age 5 Da Vinci lived on an estate owned by his father. His uncle took interest in him since he enjoyed the same appreciations as Di Vinci; he also helped raise him due to this fact. Da Vinci did not have a formal education except the basic reading, writing, and math.

The movement that Da Vinci was apart of was the Renaissance movement. During the Renaissance movement Da Vinci used humanistic values. His art was tied to science and writing. Many people influenced Da Vinci such as, Andrea del Verrocchi, Massaccio, Paolo Uccello, Piero della Francesca, and Filippo Lippi. Andrea del Verrocchi was a big influence, since Da Vinci was his apprentice at a young age. He left a big impact on the art community, and still has a major influence today. Two of the most famous art pieces he created were the Mona Lisa, and the Last Supper. The reason these are so famously known is the fact that Da Vinci had an understanding of linear perspective, and his use of integrating light and shadows into the artwork. Since he used these tools it influenced other artists to try and achieve the same methods he used. Da Vinci had a talent of making his paintings look realistic; artists after him tried to replicate his art and make theirs the same too. During the Renaissance paintings were often flat, two dimensional, and unproportional. With the methods Da Vinci used, and the knowledge he had he revolutionized the world of art during this time period.

Description: Leonardo Da Vinci created a very famous painting titled The Last Supper. The Last Supper was created from 1495-1498. To create this famous painting Da Vinci used tempera and gesso as a medium, and levkas, matstic, and pitch as the media. The Last Supper is currently housed in Milan, Italy at a monastery named Santa Maria delle Grazie. As you can see in the painting it is Jesus Christ in the middle, surrounded by his disciples at a table eating.

Interpretation: The artwork for me is a symbol that deals with my personal faith. It is a story that is mentioned in the Bible. The artwork is about the night that Jesus told his disciples that he was going to be betrayed by one of them. Duke Ludovico Sforza commissioned Da Vinci to create this piece of art. The artist’s intent was to extend the refractory by showing the painting was simply a part of the room. My perception of the artwork is the same as the artists. It is a depiction of the last meal Jesus had before he was betrayed by one of his disciples. The painting shows the reactions of the disciples upon learning this information also.

Analysis: Balance due to the artwork being assymetrical is used. Emphasis is also used since the focus is clearly on Jesus being in the middle. Movement is used too by the way they are painted forming a sense of motion. Variety is depicted with all the different disciples and the other elements in the room. Linear perspective is an element used in this painting. Texture is used to make the painting more realistic too. Dark colors are used to depict a sense of sadness in the painting as well. Shadows and dark values are used to create a sense of a dark room with heaviness overhead.

Judgement: The theme of the Last Supper is traditional. The Last Supper is apart of the Renaissance movement. During the time that Da Vinci was painting other portraits were often flat, unproportional, and two dimensional. Da Vinci exceeded these standards with his vast knowledge of different components to use. Da Vinci used humanistic type values, linear perspective, texture, and different color and shade values. These different components made his artwork stand out because it appeared realistic.”