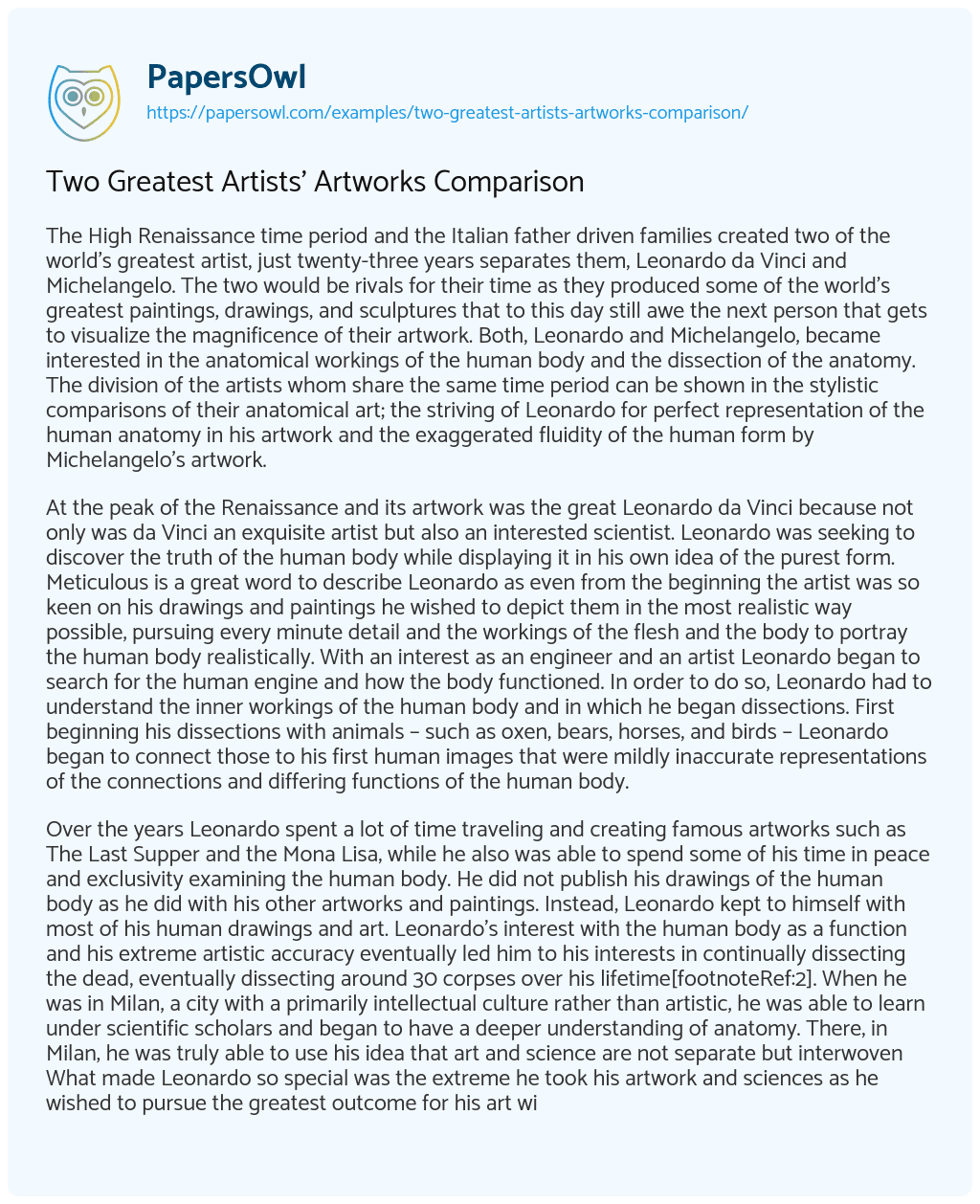 The High Renaissance time period and the Italian father driven families created two of the world’s greatest artist, just twenty-three years separates them, Leonardo da Vinci and Michelangelo. The two would be rivals for their time as they produced some of the world’s greatest paintings, drawings, and sculptures that to this day still awe the next person that gets to visualize the magnificence of their artwork. Both, Leonardo and Michelangelo, became interested in the anatomical workings of the human body and the dissection of the anatomy. The division of the artists whom share the same time period can be shown in the stylistic comparisons of their anatomical art; the striving of Leonardo for perfect representation of the human anatomy in his artwork and the exaggerated fluidity of the human form by Michelangelo’s artwork.

At the peak of the Renaissance and its artwork was the great Leonardo da Vinci because not only was da Vinci an exquisite artist but also an interested scientist. Leonardo was seeking to discover the truth of the human body while displaying it in his own idea of the purest form. Meticulous is a great word to describe Leonardo as even from the beginning the artist was so keen on his drawings and paintings he wished to depict them in the most realistic way possible, pursuing every minute detail and the workings of the flesh and the body to portray the human body realistically. With an interest as an engineer and an artist Leonardo began to search for the human engine and how the body functioned. In order to do so, Leonardo had to understand the inner workings of the human body and in which he began dissections. First beginning his dissections with animals – such as oxen, bears, horses, and birds – Leonardo began to connect those to his first human images that were mildly inaccurate representations of the connections and differing functions of the human body.

Over the years Leonardo spent a lot of time traveling and creating famous artworks such as The Last Supper and the Mona Lisa, while he also was able to spend some of his time in peace and exclusivity examining the human body. He did not publish his drawings of the human body as he did with his other artworks and paintings. Instead, Leonardo kept to himself with most of his human drawings and art. Leonardo’s interest with the human body as a function and his extreme artistic accuracy eventually led him to his interests in continually dissecting the dead, eventually dissecting around 30 corpses over his lifetime[footnoteRef:2]. When he was in Milan, a city with a primarily intellectual culture rather than artistic, he was able to learn under scientific scholars and began to have a deeper understanding of anatomy. There, in Milan, he was truly able to use his idea that art and science are not separate but interwoven What made Leonardo so special was the extreme he took his artwork and sciences as he wished to pursue the greatest outcome for his art with the correct sciences, movement of body parts, veins, and muscles as strings connecting the rest of the body.
]

One such area that Leonardo demonstrated his proportions of the human body to realism was the Vitruvian Man (Figure 1). Focusing on every inch of the human body, the ratios that occurred within them, the average size of all of the body parts, Leonardo went above and beyond as he studied the human body and while studying Vitruvius’ work. The drawing to an average viewer may seem like a human body composed within a circle within a square, but Leonardo incorporates such simple style of sketch work but extreme detail within all of it. As Leonardo shows that each portion of the body within the drawing is in a ratio of the other. While the ratios are perfected by Leonardo he also sketched more focused areas as well.

Leonardo did not publish any of his anatomical research as he mainly focused on his paintings and other works to be published, instead he attentively drew in his journals about the anatomy of the human body. Focusing on hundreds of different body parts, veins, muscles, and skin adaptations to movement, Leonardo tried to perfect the functions of the human body. One of Leonardo’s drawing of The Muscles of the Shoulder, Arm, and Neck (Figure 2). Every minute detail must be shown, even within his own journal sketches. His livelihood revolved around perfection and the understanding and visual movements of the human body. Within the drawing of Figure 2, Leonardo draws the human facing towards the right of the viewer allowing for maximum visualization of the shoulder and neck area. Also, Leonardo does not just draw the shoulder once from one angle but instead draws the humans shoulder four different times with slightly, and very slightly, differing angles to try and depict every muscle that lies beneath the skin. Leonardo’s perfection led to some of the greatest anatomical drawings of the early sixteenth century and his artwork would lead science and art to a unifying position as the realism of the artwork within the anatomy became part of the academic and scholastic community.

Twenty-three years younger was Michelangelo than Leonardo, yet both are regarded as two of the best artist the world has ever seen, but Michelangelo had a differing style than Leonardo. Michelangelo would rather focus on the external muscle movements of the body rather than the function and what underlays in the human body. Michelangelo began his anatomical research at a very early age as it is reported that he began the “art of dissection by the age of 18.[footnoteRef:4]” Public dissections became more common for Michelangelo to witness and learn from while he also began doing his own dissections. Within his dissections Michelangelo would “have made molds of muscles to experiment in their shapes and forms during various body positions.[footnoteRef:5]” These differing shapes and forms would be so masterfully displayed in his sculptures, paintings, and drawings to show the fluidity of the human body through its external bodily portrayal.

The focus of Michelangelo was not on the function of the human body but instead on how the external movements of the human body was to be portrayed on the skin and the muscles bulging from the skin. The artwork was not as scholarly or precise as Leonardo’s artwork seemed to be, as there was no precise measurement and ratios to look for. His artwork was entirely based on the meaning of the body itself and not necessarily looking for specifics or perfect representation. In doing so, Michelangelo would exaggerate some of his artwork in order to demonstrate a meaning he wanted to get across. When looking at the sculpture Pieta by Michelangelo, the Virgin Mary is disproportionally larger than the fully-grown version of Jesus Christ to demonstrate the motherhood of a woman holding her son (Figure 3).

Throughout his artistic career Michelangelo had many famous paintings and sculptures displayed in some of the most magnificent Chapels and his anatomical representations of the movement of the bodies can be seen in almost all of them. One piece of art that catches an eye is within Michelangelo’s painting of The Last Judgement (Figure 4). To the left of Jesus Christ in the painting is said to be Saint Bartholomew[footnoteRef:6]. Saint Bartholomew seems to be holding a flayed skin in his left hand and the flaying knife in the other, a reference to the Spanish artist and anatomists, Gaspar Becerra, drawing of the Figure of the flayed muscle man holding his skin and flaying knife (Figure 5). Michelangelo seemed to be fascinated by others and his own findings of the differing movements and fluidity of the human body, wishing to portray and illustrate them in every form.

Michelangelo had a differing focus on the artwork of his than did Leonardo. Michelangelo was not meticulous on the perfect representation and scholarly work as was Leonardo, as is shown in Michelangelo’s sculpture in Figure 3 as the disproportionate size of the Virgin Mary to Jesus. Michelangelo allowed his artwork to have its own meaning and representation. In this sense Michelangelo preferred to have the art find a meaning for itself. As confusing as that may sound, simply, Michelangelo wished to have his drawing, painting, or sculpture to depict the movements and actions the human body would naturally portray. On the other hand, Leonardo kept to his ratios and perfect representation with his artwork such as Figure 1, in which every part of the body perfectly has a ration to another. Not necessarily looking for an interpretation of his art but Leonardo demonstrated the human body in its purest form.

Michelangelo and Leonardo da Vinci seemed to create differing paintings, sculptures, and drawings of the human anatomy, yet their interest was their similarity. Both of these amazing Italian artists were raised by fathers and belong to the artistic period of the high renaissance. While each of these artists seemed to be raised in Italian households, ran by the fathers, they both proceeded to pursue their artistic careers and the outcomes of their art can only be held in differing styles. The anatomical persistence by both ended up becoming a sort of rivalry between the two great artists as their artwork, as competition does to people, advanced and created some of the most attractive and memorable anatomical art the world has ever seen.

How Cadaver Dissection and Artists Impacted the Field of Anatomy

Three of the Greatest Artist