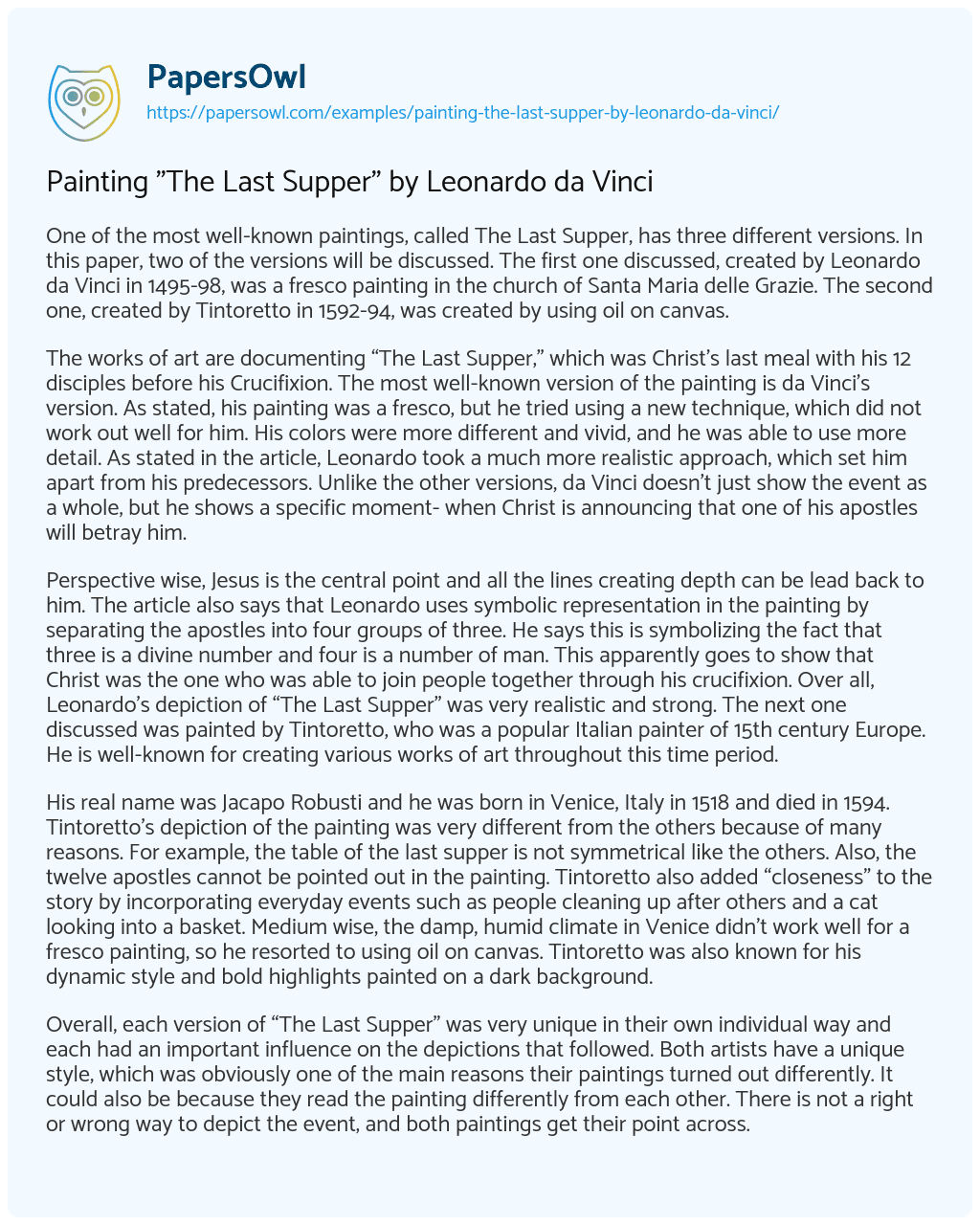 One of the most well-known paintings, called The Last Supper, has three different versions. In this paper, two of the versions will be discussed. The first one discussed, created by Leonardo da Vinci in 1495-98, was a fresco painting in the church of Santa Maria delle Grazie. The second one, created by Tintoretto in 1592-94, was created by using oil on canvas.

The works of art are documenting “The Last Supper,” which was Christ’s last meal with his 12 disciples before his Crucifixion. The most well-known version of the painting is da Vinci’s version. As stated, his painting was a fresco, but he tried using a new technique, which did not work out well for him. His colors were more different and vivid, and he was able to use more detail. As stated in the article, Leonardo took a much more realistic approach, which set him apart from his predecessors. Unlike the other versions, da Vinci doesn’t just show the event as a whole, but he shows a specific moment- when Christ is announcing that one of his apostles will betray him.

Perspective wise, Jesus is the central point and all the lines creating depth can be lead back to him. The article also says that Leonardo uses symbolic representation in the painting by separating the apostles into four groups of three. He says this is symbolizing the fact that three is a divine number and four is a number of man. This apparently goes to show that Christ was the one who was able to join people together through his crucifixion. Over all, Leonardo’s depiction of “The Last Supper” was very realistic and strong. The next one discussed was painted by Tintoretto, who was a popular Italian painter of 15th century Europe. He is well-known for creating various works of art throughout this time period.

His real name was Jacapo Robusti and he was born in Venice, Italy in 1518 and died in 1594. Tintoretto’s depiction of the painting was very different from the others because of many reasons. For example, the table of the last supper is not symmetrical like the others. Also, the twelve apostles cannot be pointed out in the painting. Tintoretto also added “closeness” to the story by incorporating everyday events such as people cleaning up after others and a cat looking into a basket. Medium wise, the damp, humid climate in Venice didn’t work well for a fresco painting, so he resorted to using oil on canvas. Tintoretto was also known for his dynamic style and bold highlights painted on a dark background.

Overall, each version of “The Last Supper” was very unique in their own individual way and each had an important influence on the depictions that followed. Both artists have a unique style, which was obviously one of the main reasons their paintings turned out differently. It could also be because they read the painting differently from each other. There is not a right or wrong way to depict the event, and both paintings get their point across.

Painting "The Last Supper" by Leonardo da Vinci. (2021, May 03). Retrieved from https://papersowl.com/examples/painting-the-last-supper-by-leonardo-da-vinci/