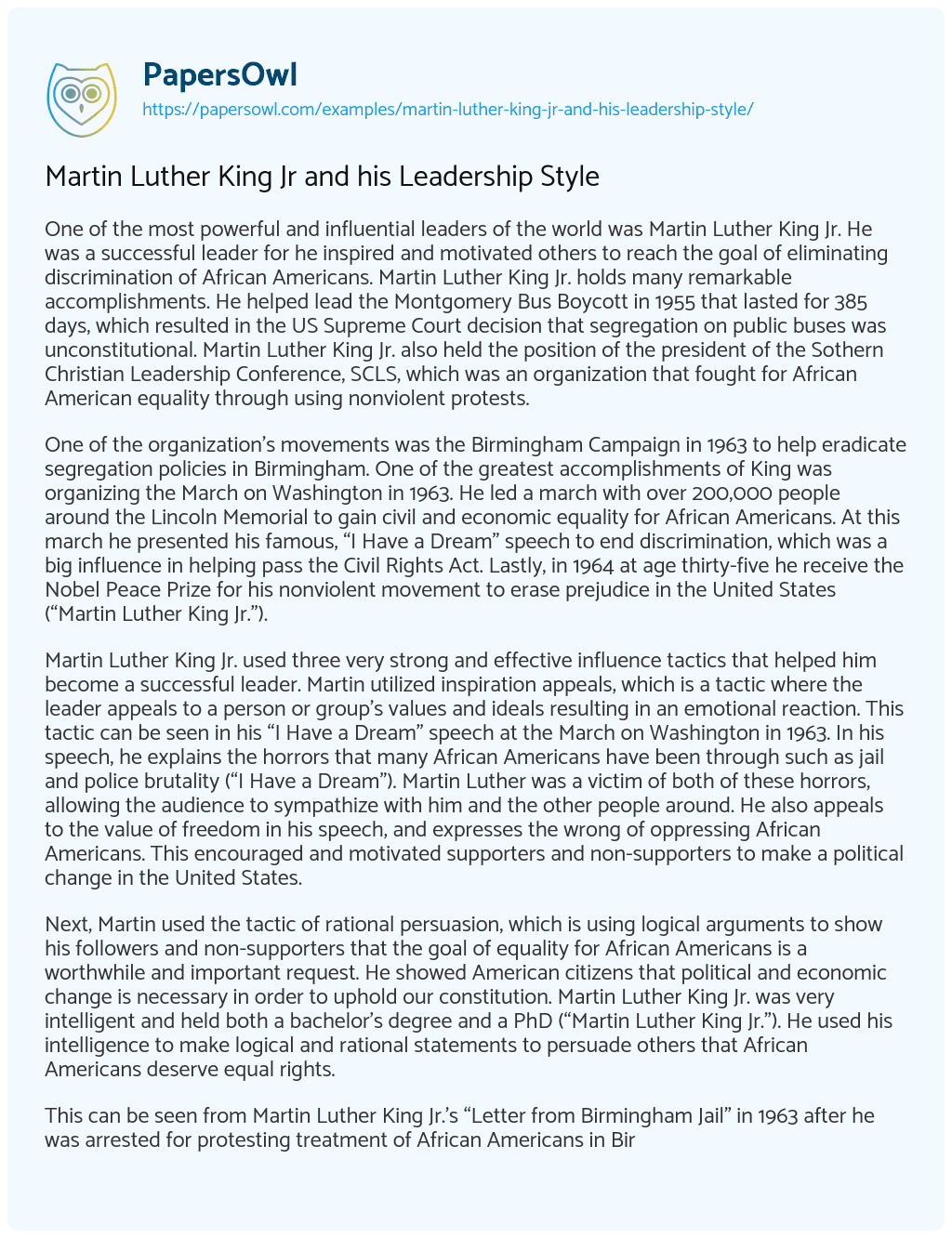 One of the most powerful and influential leaders of the world was Martin Luther King Jr. He was a successful leader for he inspired and motivated others to reach the goal of eliminating discrimination of African Americans. Martin Luther King Jr. holds many remarkable accomplishments. He helped lead the Montgomery Bus Boycott in 1955 that lasted for 385 days, which resulted in the US Supreme Court decision that segregation on public buses was unconstitutional. Martin Luther King Jr. also held the position of the president of the Sothern Christian Leadership Conference, SCLS, which was an organization that fought for African American equality through using nonviolent protests.

One of the organization’s movements was the Birmingham Campaign in 1963 to help eradicate segregation policies in Birmingham. One of the greatest accomplishments of King was organizing the March on Washington in 1963. He led a march with over 200,000 people around the Lincoln Memorial to gain civil and economic equality for African Americans. At this march he presented his famous, “I Have a Dream” speech to end discrimination, which was a big influence in helping pass the Civil Rights Act. Lastly, in 1964 at age thirty-five he receive the Nobel Peace Prize for his nonviolent movement to erase prejudice in the United States (“Martin Luther King Jr.”).

Martin Luther King Jr. used three very strong and effective influence tactics that helped him become a successful leader. Martin utilized inspiration appeals, which is a tactic where the leader appeals to a person or group’s values and ideals resulting in an emotional reaction. This tactic can be seen in his “I Have a Dream” speech at the March on Washington in 1963. In his speech, he explains the horrors that many African Americans have been through such as jail and police brutality (“I Have a Dream”). Martin Luther was a victim of both of these horrors, allowing the audience to sympathize with him and the other people around. He also appeals to the value of freedom in his speech, and expresses the wrong of oppressing African Americans. This encouraged and motivated supporters and non-supporters to make a political change in the United States.

Next, Martin used the tactic of rational persuasion, which is using logical arguments to show his followers and non-supporters that the goal of equality for African Americans is a worthwhile and important request. He showed American citizens that political and economic change is necessary in order to uphold our constitution. Martin Luther King Jr. was very intelligent and held both a bachelor’s degree and a PhD (“Martin Luther King Jr.”). He used his intelligence to make logical and rational statements to persuade others that African Americans deserve equal rights.

Lastly, MLK used the influence tactic of collaboration, which is working with your target to complete tasks to obtain a goal as a whole. He used this by participating in all of his protests with his followers and providing followers with support and recourses to non-violently fight for African American rights. For example, in the Montgomery Bus Boycott he was so involved with other members that he got arrested. MLK preached and led people, but always participated in all of his planned protests, which helped encourage his supporters and at the same time showing his followers that he was a loyal leader. With all three influence tactics, he proved to be a very great leader who was admirably supported by his followers.

Martin Luther King Jr., held two types of power that helped lead to his success in ending discrimination for African Americans. MLK held legitimate power by being the president of SCLS. Legitimate power is based on authority or being in a high position within an organization. This power allowed him to easily gain followers from this organization as well as be respected by the African American community. Martin Luther King Jr., also held a bachelor’s degree and a PhD that made him hold power over other members of society that did not hold these degrees. These two types of authority allowed Martin to hold legitimate power that helped him gain support in his goal to end discrimination.

MLK also held referent power, which is based off a leader being affectionate, admirable, and loyal to followers. This is shown by MLK always participating in protests along with his followers and using non-violence tactics. By using non-violent tactics, even when police used brutality on him and his followers, showed that he is a very admirable and respectful person.

With these powers, MLK gained a great number of supporters to help fulfill the goal of freedom for African Americans. After reviewing his influence tactics and power, Martin Luther King Jr. can be seen to hold the leadership style of transformational. He was a leader that was focused on providing his followers with a shared visions and values of freedom for African Americas. He encouraged and influenced members to fight for a change regarding the rights of African Americas through being a positive role model, inspirational, motivating, and compassion towards his followers. He never bribed or forced anything upon his followers, instead he always supported and interacted with them through protests. King, was in the same shoes as his supporters which provided him with empathy towards his supporters.

MLK can be seen as a positive role model and inspirational by being strong and never resorting to violence when faced with threats and violence from police and government. He motivated people by providing hard facts within his “I Have a Dream” speech and his “Letter from Birmingham Jail”, showing people the reality of society and that there must be a change in America. With his leadership style, power, and influence tactics, Martin Luther King Jr. has proved to be one of the greatest leaders in the world.

Martin Luther King Jr and his Leadership Style. (2021, May 03). Retrieved from https://papersowl.com/examples/martin-luther-king-jr-and-his-leadership-style/