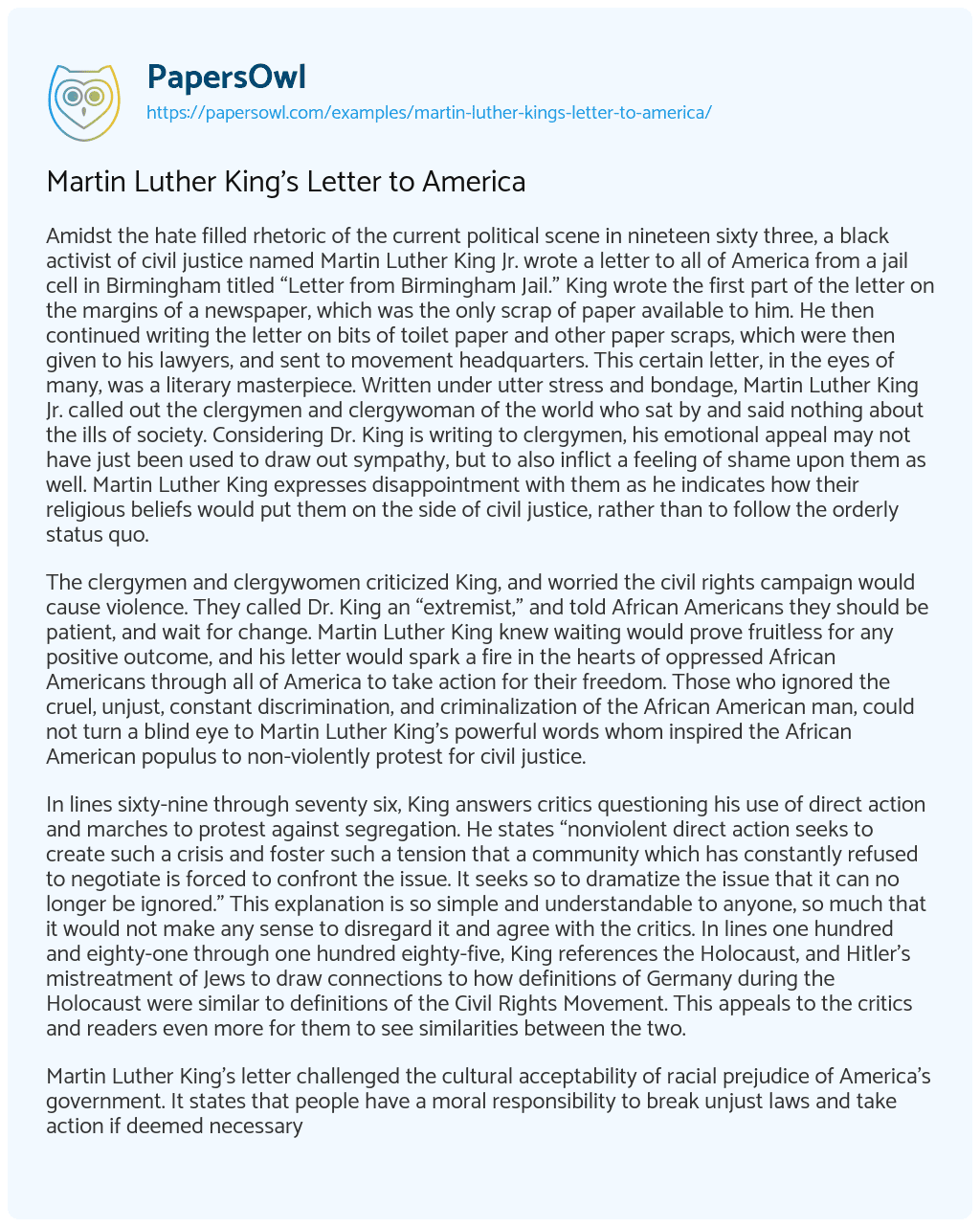 Amidst the hate filled rhetoric of the current political scene in nineteen sixty three, a black activist of civil justice named Martin Luther King Jr. wrote a letter to all of America from a jail cell in Birmingham titled “Letter from Birmingham Jail.” King wrote the first part of the letter on the margins of a newspaper, which was the only scrap of paper available to him. He then continued writing the letter on bits of toilet paper and other paper scraps, which were then given to his lawyers, and sent to movement headquarters. This certain letter, in the eyes of many, was a literary masterpiece. Written under utter stress and bondage, Martin Luther King Jr. called out the clergymen and clergywoman of the world who sat by and said nothing about the ills of society. Considering Dr. King is writing to clergymen, his emotional appeal may not have just been used to draw out sympathy, but to also inflict a feeling of shame upon them as well. Martin Luther King expresses disappointment with them as he indicates how their religious beliefs would put them on the side of civil justice, rather than to follow the orderly status quo.

The clergymen and clergywomen criticized King, and worried the civil rights campaign would cause violence. They called Dr. King an “extremist,” and told African Americans they should be patient, and wait for change. Martin Luther King knew waiting would prove fruitless for any positive outcome, and his letter would spark a fire in the hearts of oppressed African Americans through all of America to take action for their freedom. Those who ignored the cruel, unjust, constant discrimination, and criminalization of the African American man, could not turn a blind eye to Martin Luther King’s powerful words whom inspired the African American populus to non-violently protest for civil justice.

In lines sixty-nine through seventy six, King answers critics questioning his use of direct action and marches to protest against segregation. He states “nonviolent direct action seeks to create such a crisis and foster such a tension that a community which has constantly refused to negotiate is forced to confront the issue. It seeks so to dramatize the issue that it can no longer be ignored.” This explanation is so simple and understandable to anyone, so much that it would not make any sense to disregard it and agree with the critics. In lines one hundred and eighty-one through one hundred eighty-five, King references the Holocaust, and Hitler’s mistreatment of Jews to draw connections to how definitions of Germany during the Holocaust were similar to definitions of the Civil Rights Movement. This appeals to the critics and readers even more for them to see similarities between the two.

Martin Luther King’s letter challenged the cultural acceptability of racial prejudice of America’s government. It states that people have a moral responsibility to break unjust laws and take action if deemed necessary instead of waiting for justice to come through the courts. Responding to being called an “outsider.” King writes, “Injustice anywhere is a threat to justice everywhere.”

Further proof of this statement can be found in various encyclopedias, biographies, and textbooks. One example is an article published on November 9, 2007, from the Alabama Humanities Foundation. Written in the “Encyclopedia of Alabama,” Jonathan S. Bass of Samford University published a descriptive reading about Martin Luther King’s “Letter from Birmingham Jail.” In his article, Bass stated King’s letter as “The most important written document of the civil rights era,” and “how it served as a tangible, reproducible account of the long road to freedom in a movement that was largely centered around spoken words.” Jonathan Bass’ article can be found through your web browser, and can be read completely free of charge.

Martin Luther King Jr.’s “Letter from Birmingham Jail” was first appeared in the national press on May 19, 1963, and was later printed and reprinted all throughout the United States of America. Stated in an article published on April 15, 2013, Kathy Lohr states that even fifty years later, Kings powerful letter still resonates within our nation. Martin Luther King Jr.’s “Letter from Birmingham Jail” is a historical turning point for the civil rights movement, and a victory for civil justice. In the aftermath of the fight for civil justice, King’s words are a part of American folklore, and can be found in hundreds of biographies, hundreds of anthologies, and is studied in hundreds of schools, and colleges all over the world. On the “Letter’s” anniversary, public readings are taking place all across the globe. More than two hundred groups have signed up, including students of Harvard, inmates in New york, and clergy in South Africa.

Martin Luther King’s Letter to America. (2021, May 03). Retrieved from https://papersowl.com/examples/martin-luther-kings-letter-to-america/