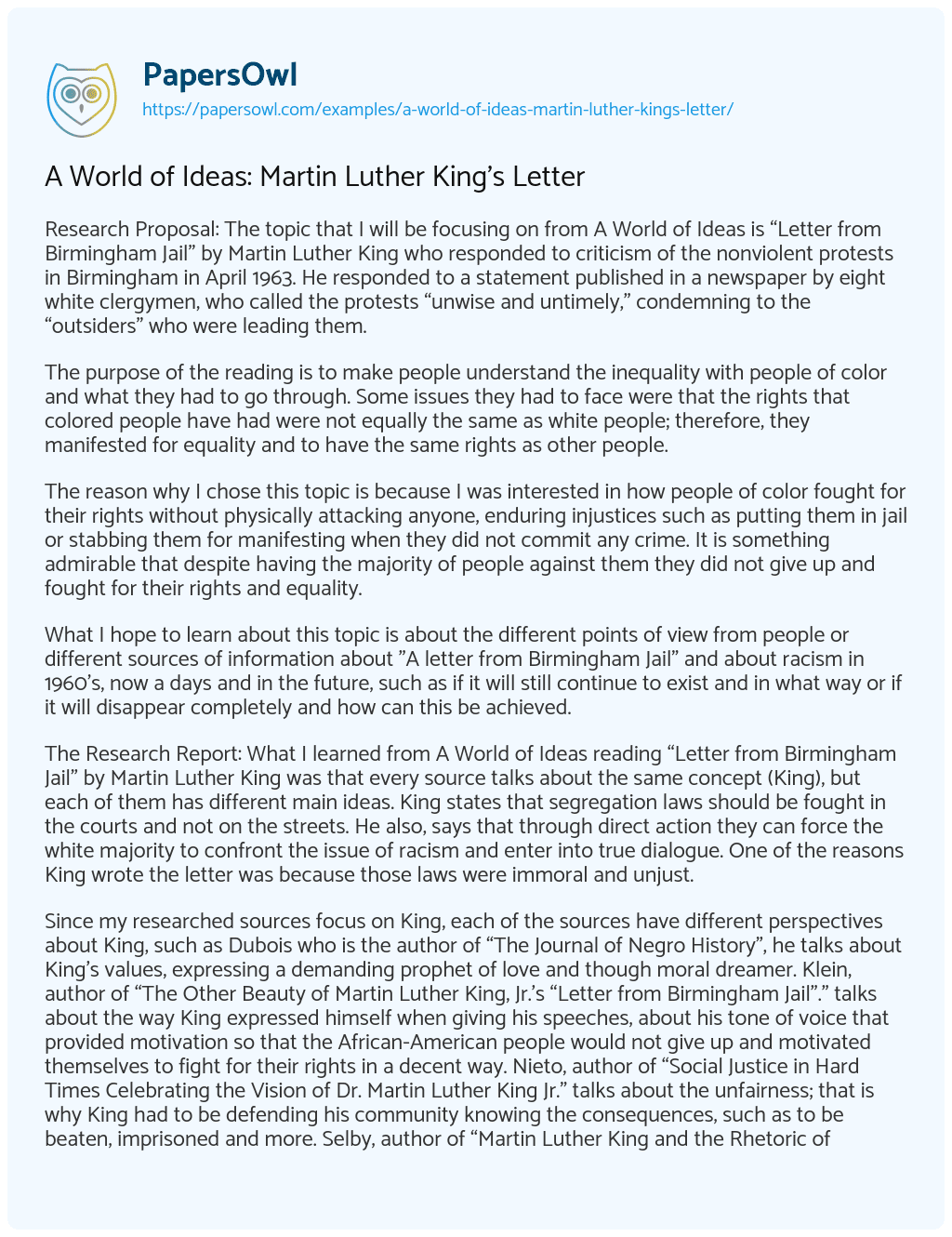 Research Proposal: The topic that I will be focusing on from A World of Ideas is “Letter from Birmingham Jail” by Martin Luther King who responded to criticism of the nonviolent protests in Birmingham in April 1963. He responded to a statement published in a newspaper by eight white clergymen, who called the protests “unwise and untimely,” condemning to the “outsiders” who were leading them.

The purpose of the reading is to make people understand the inequality with people of color and what they had to go through. Some issues they had to face were that the rights that colored people have had were not equally the same as white people; therefore, they manifested for equality and to have the same rights as other people.

The reason why I chose this topic is because I was interested in how people of color fought for their rights without physically attacking anyone, enduring injustices such as putting them in jail or stabbing them for manifesting when they did not commit any crime. It is something admirable that despite having the majority of people against them they did not give up and fought for their rights and equality.

What I hope to learn about this topic is about the different points of view from people or different sources of information about “A letter from Birmingham Jail” and about racism in 1960’s, now a days and in the future, such as if it will still continue to exist and in what way or if it will disappear completely and how can this be achieved.

The Research Report: What I learned from A World of Ideas reading “Letter from Birmingham Jail” by Martin Luther King was that every source talks about the same concept (King), but each of them has different main ideas. King states that segregation laws should be fought in the courts and not on the streets. He also, says that through direct action they can force the white majority to confront the issue of racism and enter into true dialogue. One of the reasons King wrote the letter was because those laws were immoral and unjust.

Since my researched sources focus on King, each of the sources have different perspectives about King, such as Dubois who is the author of “The Journal of Negro History”, he talks about King’s values, expressing a demanding prophet of love and though moral dreamer. Klein, author of “The Other Beauty of Martin Luther King, Jr.’s “Letter from Birmingham Jail”.” talks about the way King expressed himself when giving his speeches, about his tone of voice that provided motivation so that the African-American people would not give up and motivated themselves to fight for their rights in a decent way. Nieto, author of “Social Justice in Hard Times Celebrating the Vision of Dr. Martin Luther King Jr.” talks about the unfairness; that is why King had to be defending his community knowing the consequences, such as to be beaten, imprisoned and more. Selby, author of “Martin Luther King and the Rhetoric of Freedom: The Exodus Narrative in America’s Struggle for Civil Rights.” talks about the threats that were being made to King, just as they fined him and other leaders for demonstrating. They had them under surveillance and did everything possible so that they would not have the facility to express their right. Sunnemark, author of “Ring Out Freedom! The Voice of Martin Luther King, Jr. And the Making of the Civil Rights Movement.” Talks about King’s rhetoric and to explain it, he makes a comparison with an art painting. King used politics, religion, science, psychology, and history to frame the images he drew on the canvas of his civil rights rhetoric. Last but not least; Whitaker, author of “Martin Luther King Jr. And Mormonism: Dialogue, Race, And Pluralism.” talks about the religion of the Mormons and makes a comparison with King and also with the African Americans. He says that the two of them (Mormons and African – Americans) fought for their liberation and that the Mormons were inspired by King’s words and actions to be able to obtain the liberation.

What I learned about the issue of my research resources is that since the authors talk about racism towards the African Americans, they focus more on King because in some way, thanks to him the racism diminished and more rights were obtained. Each of my research sources talks about different aspects of King, whether it be about his personality, his values, his thinking, etc. The problem based on King is Descriptive since it is not about what King should do but about the decisions he made regarding racism and the manifestations he made for equality, rights, and liberation.

Working thesis: I believe that my research sources are effective because although each one focuses on different qualities about King, they have the same main idea that he was a person who gave everything to be able to achieve equality, have rights, and decrease racism towards African Americans. According to my sources, King was a person who marked many people and achieved their purpose. Perhaps it has not managed to eliminate discrimination completely because it is something that will possibly never disappear, but it has made people be treated in a better way, and to have better opportunities.

A World of Ideas: Martin Luther King's Letter. (2021, May 29). Retrieved from https://papersowl.com/examples/a-world-of-ideas-martin-luther-kings-letter/