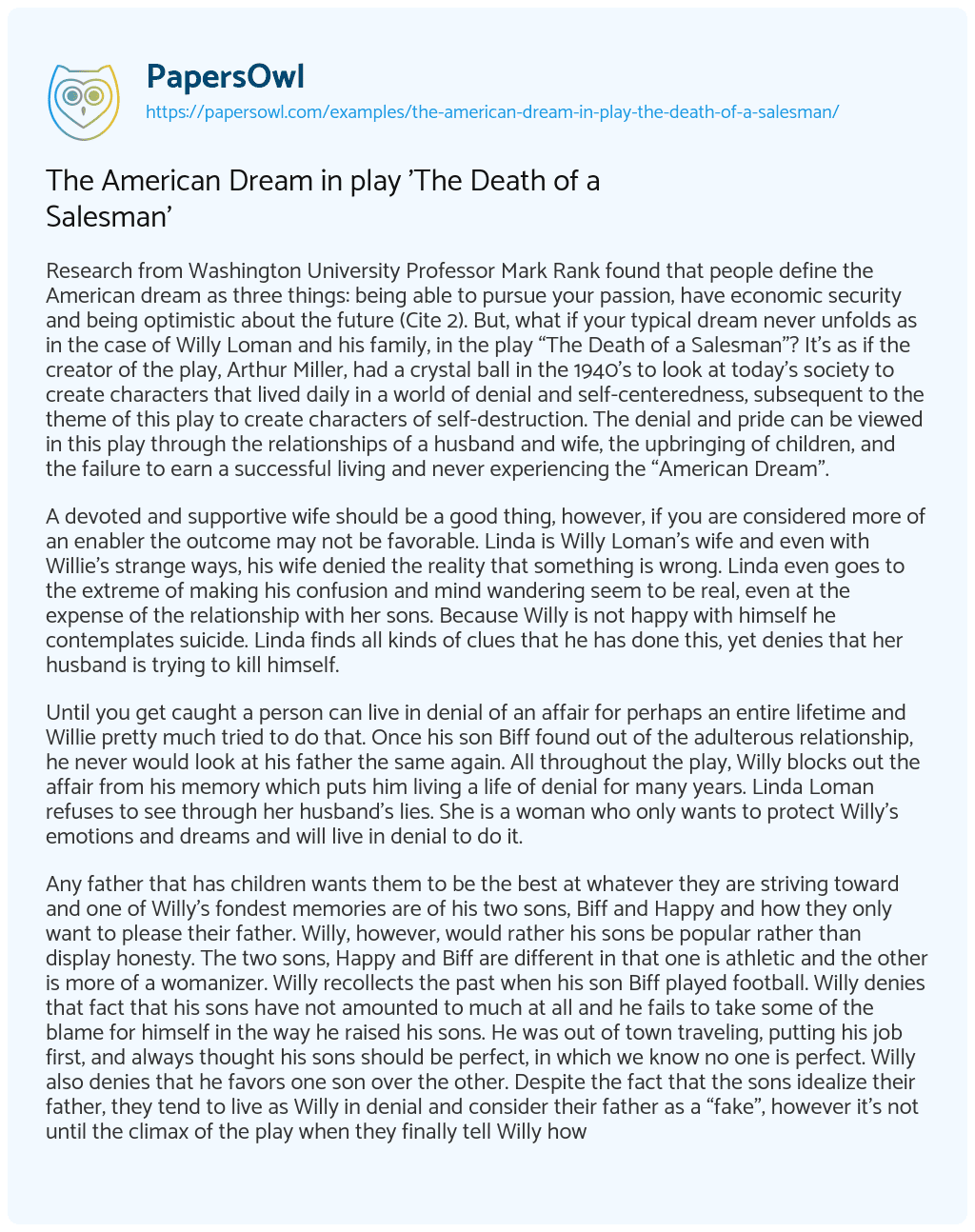 Research from Washington University Professor Mark Rank found that people define the American dream as three things: being able to pursue your passion, have economic security and being optimistic about the future (Cite 2). But, what if your typical dream never unfolds as in the case of Willy Loman and his family, in the play “The Death of a Salesman”? It’s as if the creator of the play, Arthur Miller, had a crystal ball in the 1940’s to look at today’s society to create characters that lived daily in a world of denial and self-centeredness, subsequent to the theme of this play to create characters of self-destruction. The denial and pride can be viewed in this play through the relationships of a husband and wife, the upbringing of children, and the failure to earn a successful living and never experiencing the “American Dream”.

A devoted and supportive wife should be a good thing, however, if you are considered more of an enabler the outcome may not be favorable. Linda is Willy Loman’s wife and even with Willie’s strange ways, his wife denied the reality that something is wrong. Linda even goes to the extreme of making his confusion and mind wandering seem to be real, even at the expense of the relationship with her sons. Because Willy is not happy with himself he contemplates suicide. Linda finds all kinds of clues that he has done this, yet denies that her husband is trying to kill himself.

Until you get caught a person can live in denial of an affair for perhaps an entire lifetime and Willie pretty much tried to do that. Once his son Biff found out of the adulterous relationship, he never would look at his father the same again. All throughout the play, Willy blocks out the affair from his memory which puts him living a life of denial for many years. Linda Loman refuses to see through her husband’s lies. She is a woman who only wants to protect Willy’s emotions and dreams and will live in denial to do it.

Any father that has children wants them to be the best at whatever they are striving toward and one of Willy’s fondest memories are of his two sons, Biff and Happy and how they only want to please their father. Willy, however, would rather his sons be popular rather than display honesty. The two sons, Happy and Biff are different in that one is athletic and the other is more of a womanizer. Willy recollects the past when his son Biff played football. Willy denies that fact that his sons have not amounted to much at all and he fails to take some of the blame for himself in the way he raised his sons. He was out of town traveling, putting his job first, and always thought his sons should be perfect, in which we know no one is perfect. Willy also denies that he favors one son over the other. Despite the fact that the sons idealize their father, they tend to live as Willy in denial and consider their father as a “fake”, however it’s not until the climax of the play when they finally tell Willy how they actually feel about him.

The obvious denial of reality that success has not yet come for Willy Loman has made him blind to the fact he wants to just end it all. He negates that fact that hard work and continuing to learn was something he did not pursue. Willy could not accept the circumstance that he was just your average salesman and needed to put forth extra effort to be where he wanted to be on the social ladder. In order to tame his denial, that he could never be the successful person he foresees related to his job, Willy tends to live in the past to recollect on the good times. In the end Willy is forced to deny the reality that his time has come to end his sales days.

The American dream is defined as a happy way of living that is thought of by many Americans as something that can be achieved by anyone in the U.S. especially by working hard and becoming successful (Cite 1). If you have a good job, a nice house, at least two children, and plenty of money, you might just be living the American dream (Cite 1). However, there are probably more people that haven’t quite achieved the definition of their dreams. The key is to continue to work hard, be honest and learn from each of the characters roles of denial and self-pride and not repeat them ourselves.

The American Dream in play 'The Death of a Salesman'. (2021, May 29). Retrieved from https://papersowl.com/examples/the-american-dream-in-play-the-death-of-a-salesman/