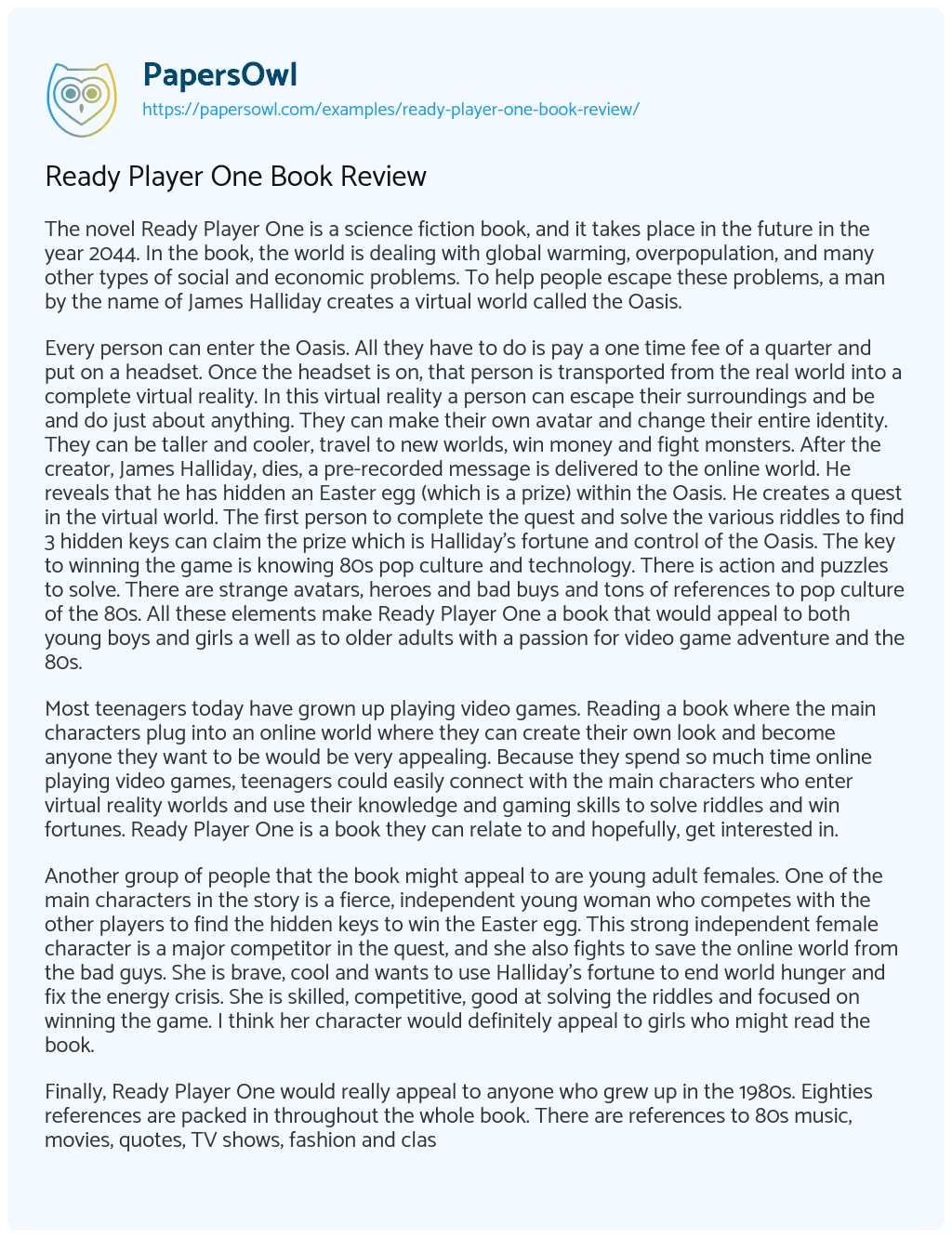 The novel Ready Player One is a science fiction book, and it takes place in the future in the year 2044. In the book, the world is dealing with global warming, overpopulation, and many other types of social and economic problems. To help people escape these problems, a man by the name of James Halliday creates a virtual world called the Oasis.

Every person can enter the Oasis. All they have to do is pay a one time fee of a quarter and put on a headset. Once the headset is on, that person is transported from the real world into a complete virtual reality. In this virtual reality a person can escape their surroundings and be and do just about anything. They can make their own avatar and change their entire identity. They can be taller and cooler, travel to new worlds, win money and fight monsters. After the creator, James Halliday, dies, a pre-recorded message is delivered to the online world. He reveals that he has hidden an Easter egg (which is a prize) within the Oasis. He creates a quest in the virtual world. The first person to complete the quest and solve the various riddles to find 3 hidden keys can claim the prize which is Halliday’s fortune and control of the Oasis. The key to winning the game is knowing 80s pop culture and technology. There is action and puzzles to solve. There are strange avatars, heroes and bad buys and tons of references to pop culture of the 80s. All these elements make Ready Player One a book that would appeal to both young boys and girls a well as to older adults with a passion for video game adventure and the 80s.

Most teenagers today have grown up playing video games. Reading a book where the main characters plug into an online world where they can create their own look and become anyone they want to be would be very appealing. Because they spend so much time online playing video games, teenagers could easily connect with the main characters who enter virtual reality worlds and use their knowledge and gaming skills to solve riddles and win fortunes. Ready Player One is a book they can relate to and hopefully, get interested in.

Another group of people that the book might appeal to are young adult females. One of the main characters in the story is a fierce, independent young woman who competes with the other players to find the hidden keys to win the Easter egg. This strong independent female character is a major competitor in the quest, and she also fights to save the online world from the bad guys. She is brave, cool and wants to use Halliday’s fortune to end world hunger and fix the energy crisis. She is skilled, competitive, good at solving the riddles and focused on winning the game. I think her character would definitely appeal to girls who might read the book.

Finally, Ready Player One would really appeal to anyone who grew up in the 1980s. Eighties references are packed in throughout the whole book. There are references to 80s music, movies, quotes, TV shows, fashion and classic video games. To solve the riddles and find the hidden keys, the main characters in the book need to know a lot about 1980s pop culture. For anyone who is an 80s trivia nerd, this book would be very interesting to read and re-read. For younger people who might not be as familiar with the 80s pop culture, it is still easy to follow the story and enjoy the book.

Ready Player One is an action-packed story with adventure, quests, a good vs. evil storyline, and strong male and female characters that would appeal to young adults both boys and girls. Reading a story about escaping the real world and plugging into a virtual reality that is just like playing a video game could convince even the most unwilling teenager to pick up the book and read. However, the book does not just interest teenagers. The book has many references to 80s pop culture which would appeal to an older audience who lived through the 80s. In addition to enjoying the book, they would also recognize and love reliving moments from their youth.

Ready Player One: a Science-fiction Novel by Ernest Cline

The Perks of being a Wallflower Book Review