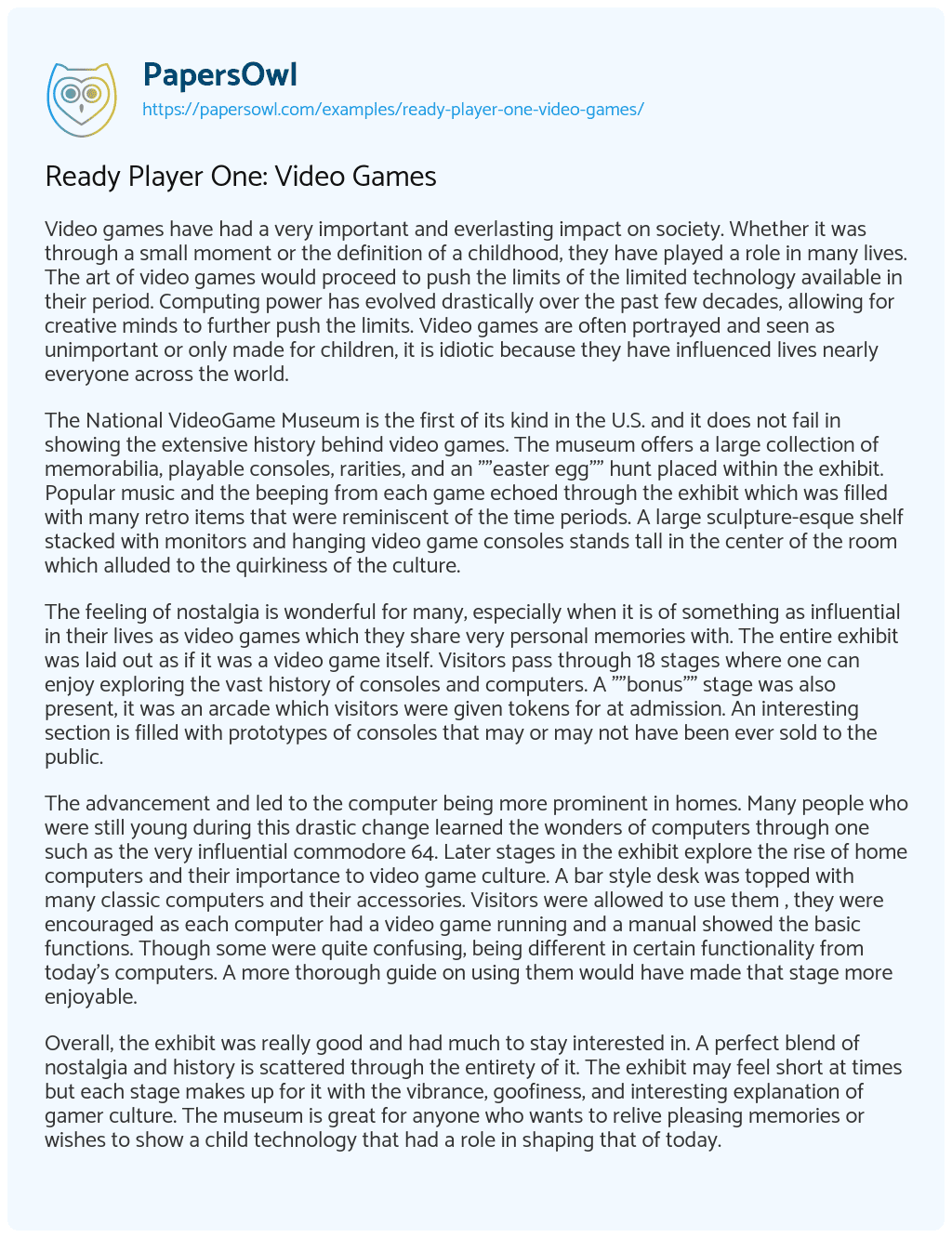 Video games have had a very important and everlasting impact on society. Whether it was through a small moment or the definition of a childhood, they have played a role in many lives. The art of video games would proceed to push the limits of the limited technology available in their period. Computing power has evolved drastically over the past few decades, allowing for creative minds to further push the limits. Video games are often portrayed and seen as unimportant or only made for children, it is idiotic because they have influenced lives nearly everyone across the world.

The National VideoGame Museum is the first of its kind in the U.S. and it does not fail in showing the extensive history behind video games. The museum offers a large collection of memorabilia, playable consoles, rarities, and an “”easter egg”” hunt placed within the exhibit. Popular music and the beeping from each game echoed through the exhibit which was filled with many retro items that were reminiscent of the time periods. A large sculpture-esque shelf stacked with monitors and hanging video game consoles stands tall in the center of the room which alluded to the quirkiness of the culture.

The feeling of nostalgia is wonderful for many, especially when it is of something as influential in their lives as video games which they share very personal memories with. The entire exhibit was laid out as if it was a video game itself. Visitors pass through 18 stages where one can enjoy exploring the vast history of consoles and computers. A “”bonus”” stage was also present, it was an arcade which visitors were given tokens for at admission. An interesting section is filled with prototypes of consoles that may or may not have been ever sold to the public.

The advancement and led to the computer being more prominent in homes. Many people who were still young during this drastic change learned the wonders of computers through one such as the very influential commodore 64. Later stages in the exhibit explore the rise of home computers and their importance to video game culture. A bar style desk was topped with many classic computers and their accessories. Visitors were allowed to use them , they were encouraged as each computer had a video game running and a manual showed the basic functions. Though some were quite confusing, being different in certain functionality from today’s computers. A more thorough guide on using them would have made that stage more enjoyable.

Overall, the exhibit was really good and had much to stay interested in. A perfect blend of nostalgia and history is scattered through the entirety of it. The exhibit may feel short at times but each stage makes up for it with the vibrance, goofiness, and interesting explanation of gamer culture. The museum is great for anyone who wants to relive pleasing memories or wishes to show a child technology that had a role in shaping that of today.