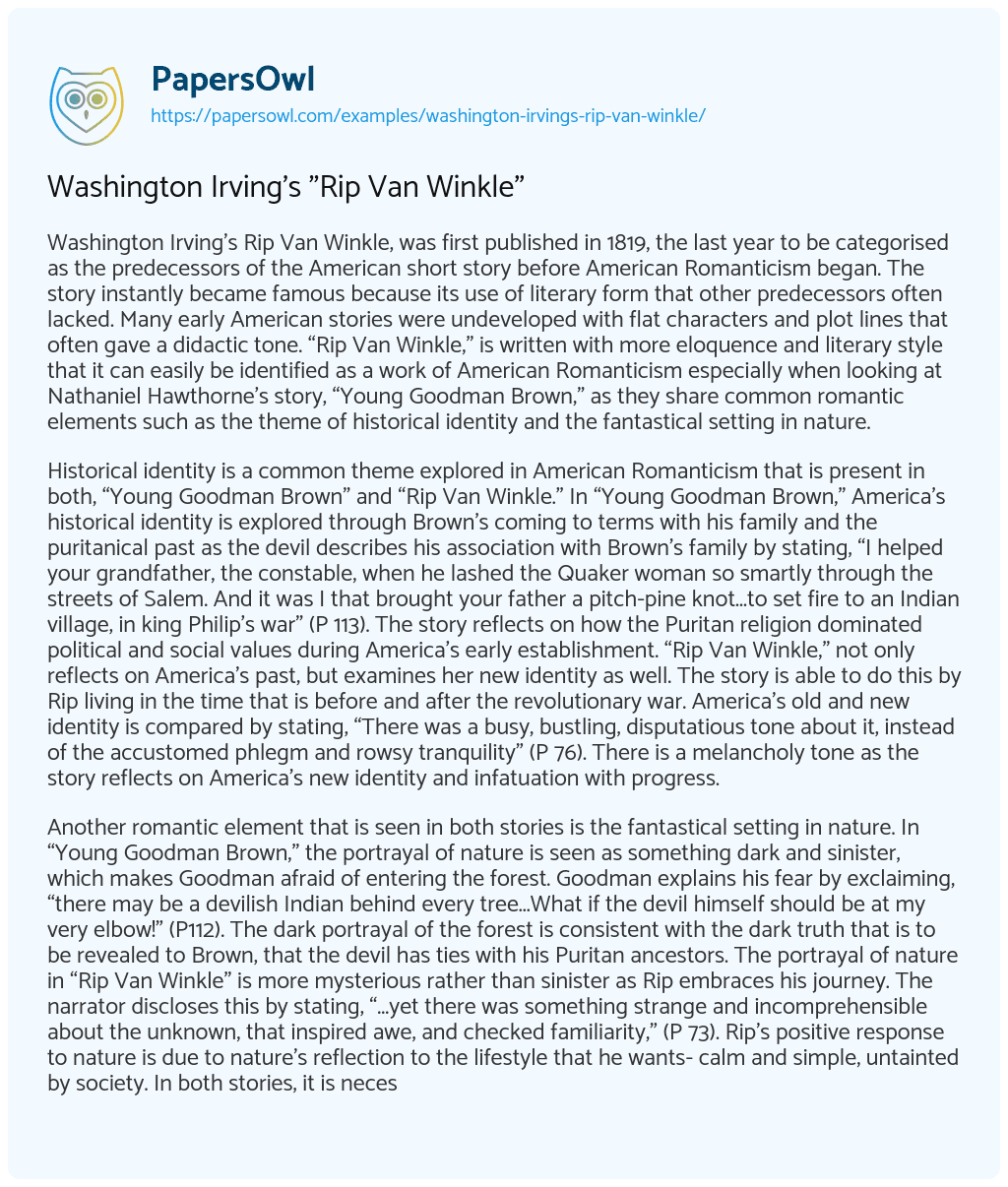 Washington Irving’s Rip Van Winkle, was first published in 1819, the last year to be categorised as the predecessors of the American short story before American Romanticism began. The story instantly became famous because its use of literary form that other predecessors often lacked. Many early American stories were undeveloped with flat characters and plot lines that often gave a didactic tone. “Rip Van Winkle,” is written with more eloquence and literary style that it can easily be identified as a work of American Romanticism especially when looking at Nathaniel Hawthorne’s story, “Young Goodman Brown,” as they share common romantic elements such as the theme of historical identity and the fantastical setting in nature.

Historical identity is a common theme explored in American Romanticism that is present in both, “Young Goodman Brown” and “Rip Van Winkle.” In “Young Goodman Brown,” America’s historical identity is explored through Brown’s coming to terms with his family and the puritanical past as the devil describes his association with Brown’s family by stating, “I helped your grandfather, the constable, when he lashed the Quaker woman so smartly through the streets of Salem. And it was I that brought your father a pitch-pine knot…to set fire to an Indian village, in king Philip’s war” (P 113). The story reflects on how the Puritan religion dominated political and social values during America’s early establishment. “Rip Van Winkle,” not only reflects on America’s past, but examines her new identity as well. The story is able to do this by Rip living in the time that is before and after the revolutionary war. America’s old and new identity is compared by stating, “There was a busy, bustling, disputatious tone about it, instead of the accustomed phlegm and rowsy tranquility” (P 76). There is a melancholy tone as the story reflects on America’s new identity and infatuation with progress.

Another romantic element that is seen in both stories is the fantastical setting in nature. In “Young Goodman Brown,” the portrayal of nature is seen as something dark and sinister, which makes Goodman afraid of entering the forest. Goodman explains his fear by exclaiming, “there may be a devilish Indian behind every tree…What if the devil himself should be at my very elbow!” (P112). The dark portrayal of the forest is consistent with the dark truth that is to be revealed to Brown, that the devil has ties with his Puritan ancestors. The portrayal of nature in “Rip Van Winkle” is more mysterious rather than sinister as Rip embraces his journey. The narrator discloses this by stating, “…yet there was something strange and incomprehensible about the unknown, that inspired awe, and checked familiarity,” (P 73). Rip’s positive response to nature is due to nature’s reflection to the lifestyle that he wants- calm and simple, untainted by society. In both stories, it is necessary for the protagonists to get away from society and enter nature in order to reflect on how society functions.

In conclusion, “Rip Van Winkle,” is a story created in a time when the American story was not known for great literary form and serves as a preview of what was to come as America was in transition from one literary period to the next. The story contains many elements of American Romanticism with the theme of American identity and fantastical setting being a few of them. The story is unique in the way that it compares America’s new identity with its former; pre and post revolution. The fantastical setting in nature makes way for Rip to reflect on America’s new identity now that he is away from society and their influences. It is only natural that “Rip Van Winkle” has many romantic elements being that it was written so closely to when the American Romanticism era began.