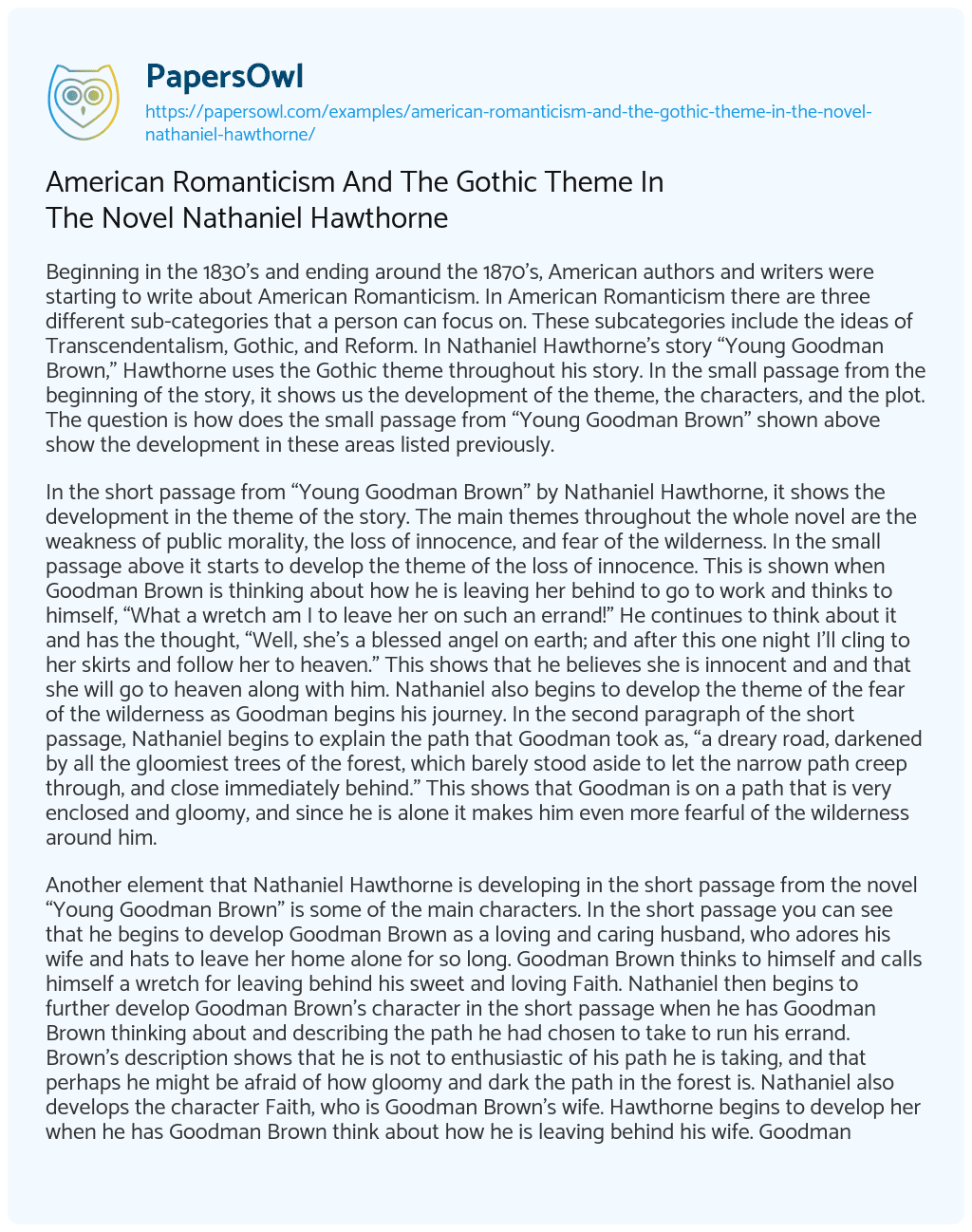 Beginning in the 1830’s and ending around the 1870’s, American authors and writers were starting to write about American Romanticism. In American Romanticism there are three different sub-categories that a person can focus on. These subcategories include the ideas of Transcendentalism, Gothic, and Reform. In Nathaniel Hawthorne’s story “Young Goodman Brown,” Hawthorne uses the Gothic theme throughout his story. In the small passage from the beginning of the story, it shows us the development of the theme, the characters, and the plot. The question is how does the small passage from “Young Goodman Brown” shown above show the development in these areas listed previously.

In the short passage from “Young Goodman Brown” by Nathaniel Hawthorne, it shows the development in the theme of the story. The main themes throughout the whole novel are the weakness of public morality, the loss of innocence, and fear of the wilderness. In the small passage above it starts to develop the theme of the loss of innocence. This is shown when Goodman Brown is thinking about how he is leaving her behind to go to work and thinks to himself, “What a wretch am I to leave her on such an errand!” He continues to think about it and has the thought, “Well, she’s a blessed angel on earth; and after this one night I’ll cling to her skirts and follow her to heaven.” This shows that he believes she is innocent and and that she will go to heaven along with him. Nathaniel also begins to develop the theme of the fear of the wilderness as Goodman begins his journey. In the second paragraph of the short passage, Nathaniel begins to explain the path that Goodman took as, “a dreary road, darkened by all the gloomiest trees of the forest, which barely stood aside to let the narrow path creep through, and close immediately behind.” This shows that Goodman is on a path that is very enclosed and gloomy, and since he is alone it makes him even more fearful of the wilderness around him.

Another element that Nathaniel Hawthorne is developing in the short passage from the novel “Young Goodman Brown” is some of the main characters. In the short passage you can see that he begins to develop Goodman Brown as a loving and caring husband, who adores his wife and hats to leave her home alone for so long. Goodman Brown thinks to himself and calls himself a wretch for leaving behind his sweet and loving Faith. Nathaniel then begins to further develop Goodman Brown’s character in the short passage when he has Goodman Brown thinking about and describing the path he had chosen to take to run his errand. Brown’s description shows that he is not to enthusiastic of his path he is taking, and that perhaps he might be afraid of how gloomy and dark the path in the forest is. Nathaniel also develops the character Faith, who is Goodman Brown’s wife. Hawthorne begins to develop her when he has Goodman Brown think about how he is leaving behind his wife. Goodman thinks about how he is leaving her to think of her dreams that are troubling her. From this thought we can get that Faith has bad dreams and probably trouble sleeping. Goodman continues to think about how he is leaving his blessed angel alone at home all day and feels bad about it. This develops the idea that Faith is seen as a blessed angel and a christian. Faith’s name alone shows that she is christian and that she is a symbol of innocence.

One other element that Nathaniel Hawthorne develops in the novel “Young Goodman Brown,” is the plot of the story. In the small passage Begins to develop the plot by telling has that Goodman Brown feels bad for leaving his blessed wife Faith at home alone. Goodman Brown is leaving because he has some sort of important errand so he has to travel to take care of this errand. This leads us to infer that something might happen to him or his wife when he is travelling to run his errand since they are both alone for the day.. Nathaniel further develops the plot by explaining what the woods around Goodman Brown’s narrow path looked like. He describes the path as gloomy, dreary, and darkened which gives a spooky feeling to Goodman Brown’s trail. This further develops the plot because the scary description of the wilderness makes it seem like something wrong is going on then, or will happen later on the journey.

American Romanticism And The Gothic Theme In The Novel Nathaniel Hawthorne. (2020, Nov 02). Retrieved from https://papersowl.com/examples/american-romanticism-and-the-gothic-theme-in-the-novel-nathaniel-hawthorne/