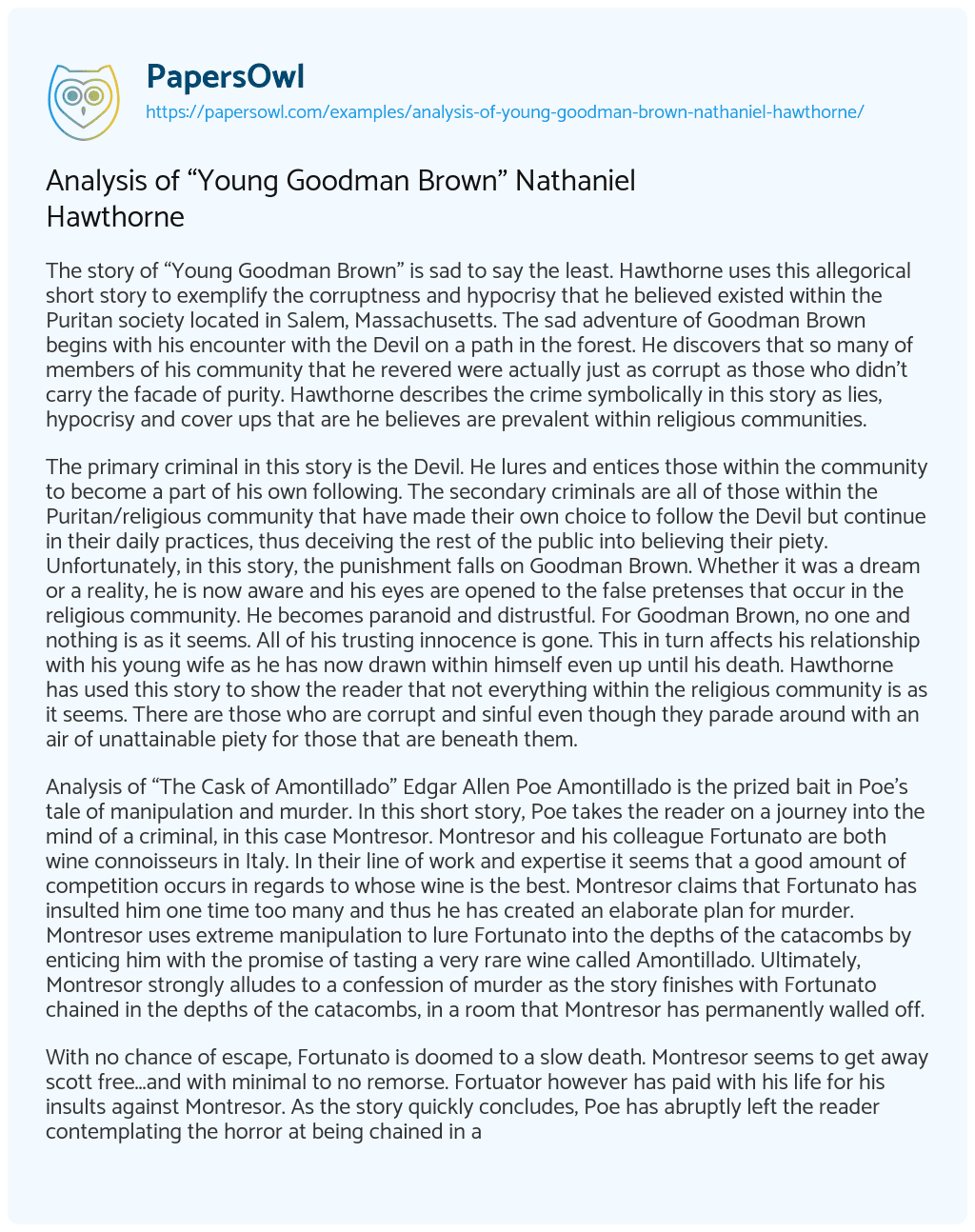 The story of “Young Goodman Brown” is sad to say the least. Hawthorne uses this allegorical short story to exemplify the corruptness and hypocrisy that he believed existed within the Puritan society located in Salem, Massachusetts. The sad adventure of Goodman Brown begins with his encounter with the Devil on a path in the forest. He discovers that so many of members of his community that he revered were actually just as corrupt as those who didn’t carry the facade of purity. Hawthorne describes the crime symbolically in this story as lies, hypocrisy and cover ups that are he believes are prevalent within religious communities.

The primary criminal in this story is the Devil. He lures and entices those within the community to become a part of his own following. The secondary criminals are all of those within the Puritan/religious community that have made their own choice to follow the Devil but continue in their daily practices, thus deceiving the rest of the public into believing their piety. Unfortunately, in this story, the punishment falls on Goodman Brown. Whether it was a dream or a reality, he is now aware and his eyes are opened to the false pretenses that occur in the religious community. He becomes paranoid and distrustful. For Goodman Brown, no one and nothing is as it seems. All of his trusting innocence is gone. This in turn affects his relationship with his young wife as he has now drawn within himself even up until his death. Hawthorne has used this story to show the reader that not everything within the religious community is as it seems. There are those who are corrupt and sinful even though they parade around with an air of unattainable piety for those that are beneath them.

Analysis of “The Cask of Amontillado” Edgar Allen Poe Amontillado is the prized bait in Poe’s tale of manipulation and murder. In this short story, Poe takes the reader on a journey into the mind of a criminal, in this case Montresor. Montresor and his colleague Fortunato are both wine connoisseurs in Italy. In their line of work and expertise it seems that a good amount of competition occurs in regards to whose wine is the best. Montresor claims that Fortunato has insulted him one time too many and thus he has created an elaborate plan for murder. Montresor uses extreme manipulation to lure Fortunato into the depths of the catacombs by enticing him with the promise of tasting a very rare wine called Amontillado. Ultimately, Montresor strongly alludes to a confession of murder as the story finishes with Fortunato chained in the depths of the catacombs, in a room that Montresor has permanently walled off.

With no chance of escape, Fortunato is doomed to a slow death. Montresor seems to get away scott free…and with minimal to no remorse. Fortuator however has paid with his life for his insults against Montresor. As the story quickly concludes, Poe has abruptly left the reader contemplating the horror at being chained in a cold, dark room, and then sealed off from life with no way to fight back. Poe has the reader thinking not only about the victim, but also the criminal, and struggling to understand how he could commit such a slow and methodical murder.