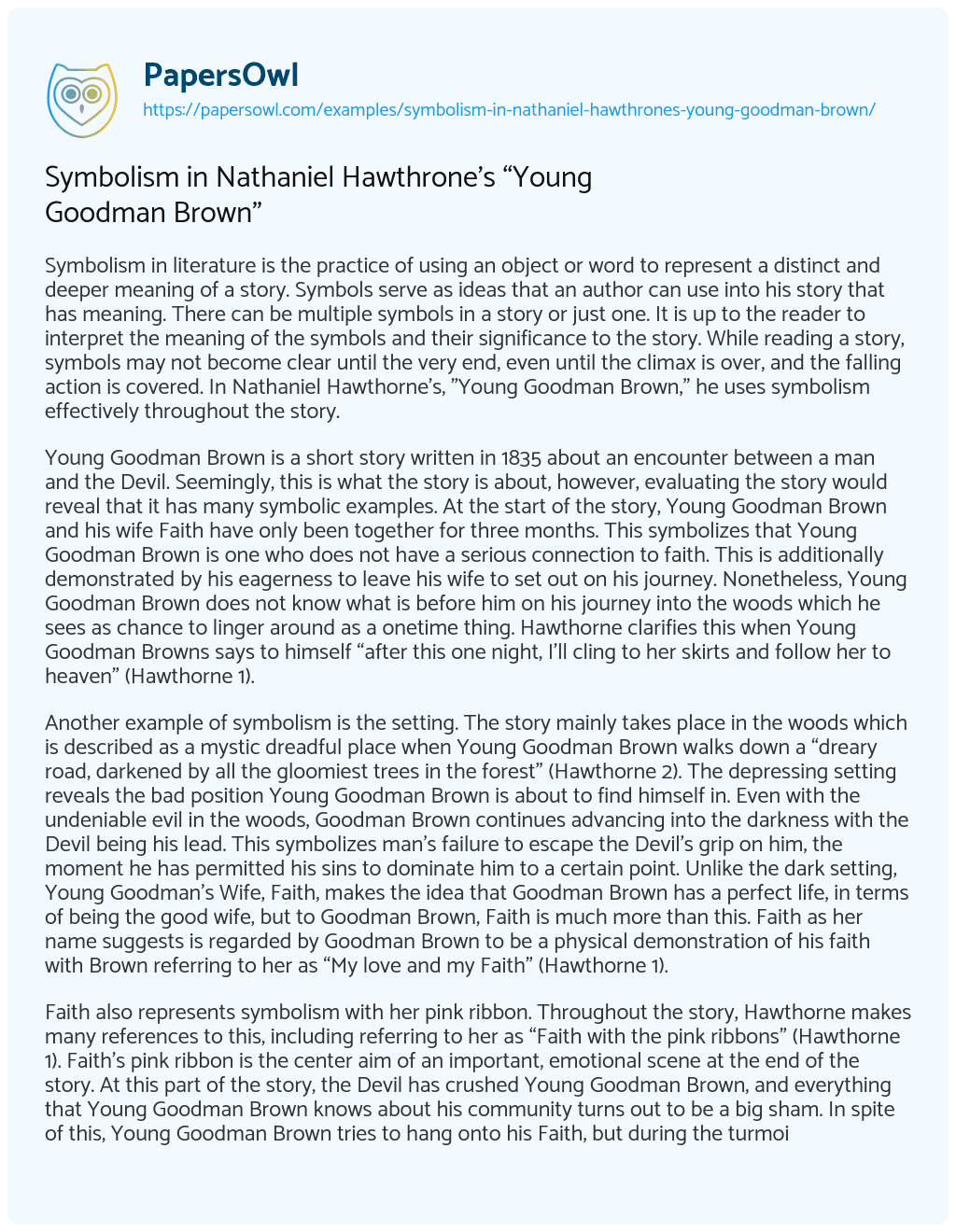 Symbolism in literature is the practice of using an object or word to represent a distinct and deeper meaning of a story. Symbols serve as ideas that an author can use into his story that has meaning. There can be multiple symbols in a story or just one. It is up to the reader to interpret the meaning of the symbols and their significance to the story. While reading a story, symbols may not become clear until the very end, even until the climax is over, and the falling action is covered. In Nathaniel Hawthorne’s, “Young Goodman Brown,” he uses symbolism effectively throughout the story.

Another example of symbolism is the setting. The story mainly takes place in the woods which is described as a mystic dreadful place when Young Goodman Brown walks down a “dreary road, darkened by all the gloomiest trees in the forest” (Hawthorne 2). The depressing setting reveals the bad position Young Goodman Brown is about to find himself in. Even with the undeniable evil in the woods, Goodman Brown continues advancing into the darkness with the Devil being his lead. This symbolizes man’s failure to escape the Devil’s grip on him, the moment he has permitted his sins to dominate him to a certain point. Unlike the dark setting, Young Goodman’s Wife, Faith, makes the idea that Goodman Brown has a perfect life, in terms of being the good wife, but to Goodman Brown, Faith is much more than this. Faith as her name suggests is regarded by Goodman Brown to be a physical demonstration of his faith with Brown referring to her as “My love and my Faith” (Hawthorne 1).

One of the main, if not the main symbol in the story is the Devil himself. Throughout history, the Devil has been used as an allegoric symbol of evil, and Young Goodman Brown continues that custom. In the story, the Devil symbolizes several things, of them being the evil that lies within us all. When first encountering Young Goodman Brown in the woods, the Devil is described as resembling an older version of Goodman Brown, amidst Hawthorne representing him as being “apparently in the same rank of life as Goodman Brown, and bearing a considerable resemblance to him, though more in expression than features. Still they might have been taken for father and son.” (Hawthorne 8) In his human form, the Devil carries with him, a walking stick in the shape of a serpent meant to represent the story of Adam and Eve, where the serpent has been used as a symbolic representation of the Devil.

The Devil is often recognized as the king of deceit, and one who can definitely crush one’s perspective and worldview around them. This is apparent when Young Goodman Brown found the real identity of his bloodline while trying to abandon the idea that his own family have in a close relationship with the devil. To this the Devil replies “I helped your grandfather, the constable when he lashed the Quaker woman so smartly through the streets of Salem.” (Hawthorne 8) He continues by saying “It was I who brought your father a pitch-pine knot, to set fire to an Indian village, in King Phillips war.” (Hawthorne 8) This symbolizes several things at once. In the context of the story, it additionally represents that the world Goodman Brown discovered himself to be in, is distinct from the world he thought he lived in. From Young Goodman Brown’s perspective, his Father and Grandfather were great role models exceptional Christian men. However, the Devil crushes this lie and shows that not only are Goodman Brown’s ancestors guilty of sin, but that they did sins alongside Satan. This may symbolize an immense grasp of awareness that evil does exist in the world, and that something or someone we think to be is good, is probably not but rather evil. A compelling point in the story takes place when Goodman Brown, now deep into the woods claims “There may be a devilish Indian behind every three, what if the devil himself should be at my very elbow” (Hawthorne 2). This represents Satan’s capacity to invade an individual’s life and remain undetected until it is too late.

Nathaniel Hawthrone’s “Young Goodman Brown”, is a great piece of literature that can be read on two different accounts. On its surface, the story tells nothing more than the story of a man who encounters a hellish event. Upon additional analysis however, the story is a profound allegoric story of the significance of faith, and how a person can grow in it or become crushed by dark forces.