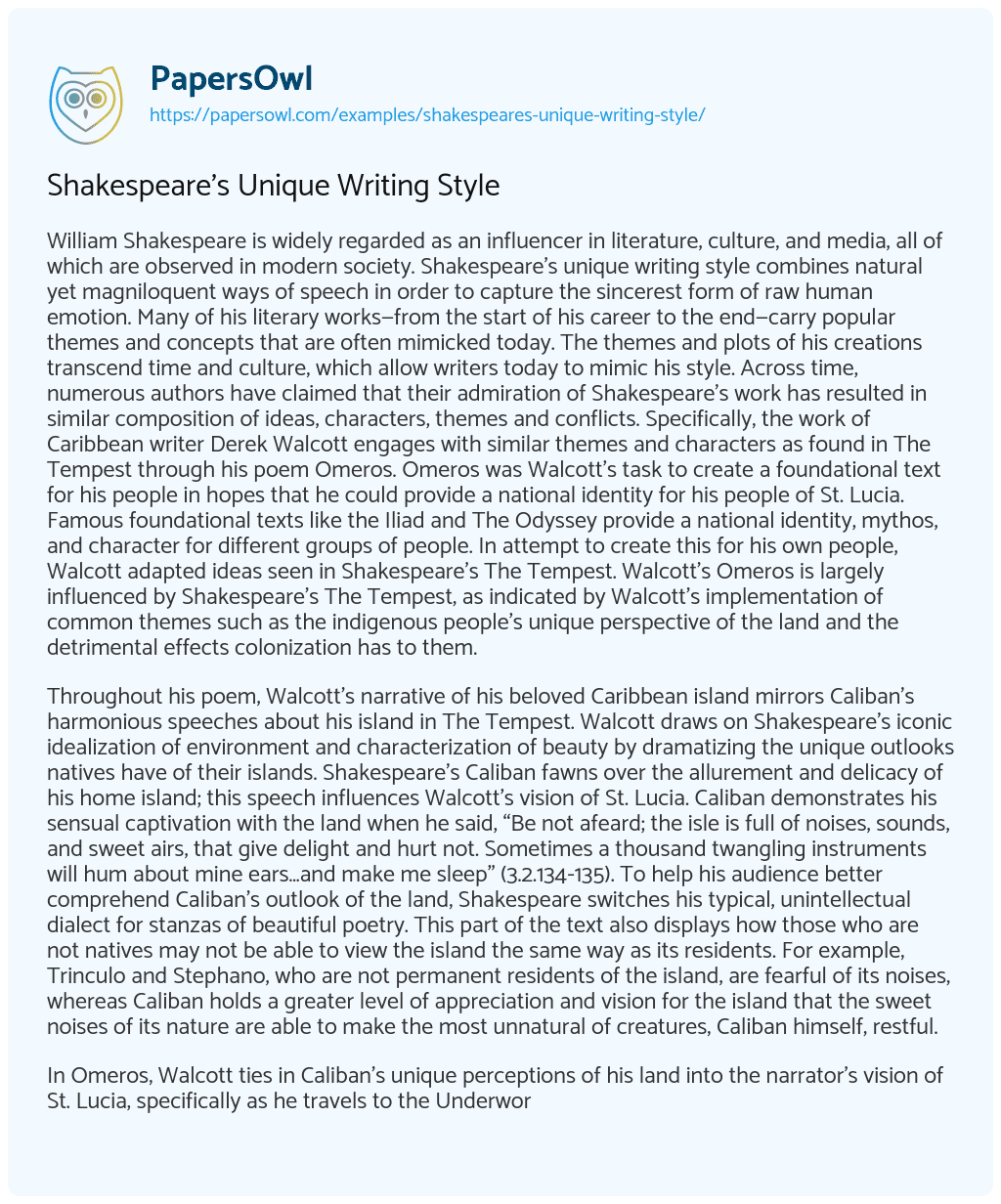 William Shakespeare is widely regarded as an influencer in literature, culture, and media, all of which are observed in modern society. Shakespeare’s unique writing style combines natural yet magniloquent ways of speech in order to capture the sincerest form of raw human emotion. Many of his literary works—from the start of his career to the end—carry popular themes and concepts that are often mimicked today. The themes and plots of his creations transcend time and culture, which allow writers today to mimic his style. Across time, numerous authors have claimed that their admiration of Shakespeare’s work has resulted in similar composition of ideas, characters, themes and conflicts. Specifically, the work of Caribbean writer Derek Walcott engages with similar themes and characters as found in The Tempest through his poem Omeros. Omeros was Walcott’s task to create a foundational text for his people in hopes that he could provide a national identity for his people of St. Lucia. Famous foundational texts like the Iliad and The Odyssey provide a national identity, mythos, and character for different groups of people. In attempt to create this for his own people, Walcott adapted ideas seen in Shakespeare’s The Tempest. Walcott’s Omeros is largely influenced by Shakespeare’s The Tempest, as indicated by Walcott’s implementation of common themes such as the indigenous people’s unique perspective of the land and the detrimental effects colonization has to them.

Throughout his poem, Walcott’s narrative of his beloved Caribbean island mirrors Caliban’s harmonious speeches about his island in The Tempest. Walcott draws on Shakespeare’s iconic idealization of environment and characterization of beauty by dramatizing the unique outlooks natives have of their islands. Shakespeare’s Caliban fawns over the allurement and delicacy of his home island; this speech influences Walcott’s vision of St. Lucia. Caliban demonstrates his sensual captivation with the land when he said, “Be not afeard; the isle is full of noises, sounds, and sweet airs, that give delight and hurt not. Sometimes a thousand twangling instruments will hum about mine ears…and make me sleep” (3.2.134-135). To help his audience better comprehend Caliban’s outlook of the land, Shakespeare switches his typical, unintellectual dialect for stanzas of beautiful poetry. This part of the text also displays how those who are not natives may not be able to view the island the same way as its residents. For example, Trinculo and Stephano, who are not permanent residents of the island, are fearful of its noises, whereas Caliban holds a greater level of appreciation and vision for the island that the sweet noises of its nature are able to make the most unnatural of creatures, Caliban himself, restful.

In Omeros, Walcott ties in Caliban’s unique perceptions of his land into the narrator’s vision of St. Lucia, specifically as he travels to the Underworld. From the boat he reflects on the island’s shoreline and observes that he, “…was seeing the light of St. Lucia at last through her own eyes,/her blindness, her inward vision as revealing/as his, because a closing darkness brightens love,/and I felt every wound pass” (Walcott 282). This unique vision of St. Lucia the narrator experiences enables an understanding and appreciation for the land most others do not recognize. Walcott uses the similar theme of visions of the land that Shakespeare’s Caliban expresses in The Tempest. By incorporating this into his poetry, Walcott’s Omeros is able to fully express the unique beauty that encompasses St. Lucia and the pride that natives should have for their beloved island.

While both the narrator and Shakespeare’s Caliban are seen to harbor a deep understanding of their native islands through similar themes of visions of the land, another notable point of influence Shakespeare’s literary work The Tempest has on Walcott is the depiction of island colonization. In, The Tempest, the reader observes a indigenous population subjected to an outside exploitive force that uses the land and people for personal gain. Shakespeare’s Caliban is the island’s sole native and after two foreign invaders, Prospero and Miranda, become stranded there, Caliban teaches them to survive. The three islanders have an amicable relationship for a period of time; however, the situation shifts after Caliban tries to rape Miranda in an attempt to populate the island. After his repulsive act, Caliban became a victim of Prospero’s tyranny. Though Caliban betrayed Prospero and Miranda, Prospero reciprocally betrayed Caliban by enslaving him for his own personal gain. Caliban brings awareness of this treachery to the reader when he weeps, “This island is mine, which thou tak’st from me…I loved thee/And showed thee all the qualities o’ th’ isle…Cursèd be I that did so!” (1.2.330-338).

This common thread is especially visible in Omeros as the native people of St. Lucia struggle to thrive under colonization and reconcile with a rise in tourism. Walcott’s use of themes seen in Shakespeare’s The Tempest allows him to address the current issue of tourism that the residents of St. Lucia face. In Omeros, Philocete is seen “smiling for the tourists” but claims they are “taking his soul with their cameras” (Walcott 3). Philoctete provides the reader with a unique perspective of what residents of St. Lucia are facing as the invasion of tourist infects the entire island. This issue is addressed through Walcott’s text as the island is focuses more on the development for tourism rather than the island’s permanent residents. This conflict seen in Omeros is a reminiscent of Shakespeare’s The Tempest, following such characteristics of a beloved yet exploited island.