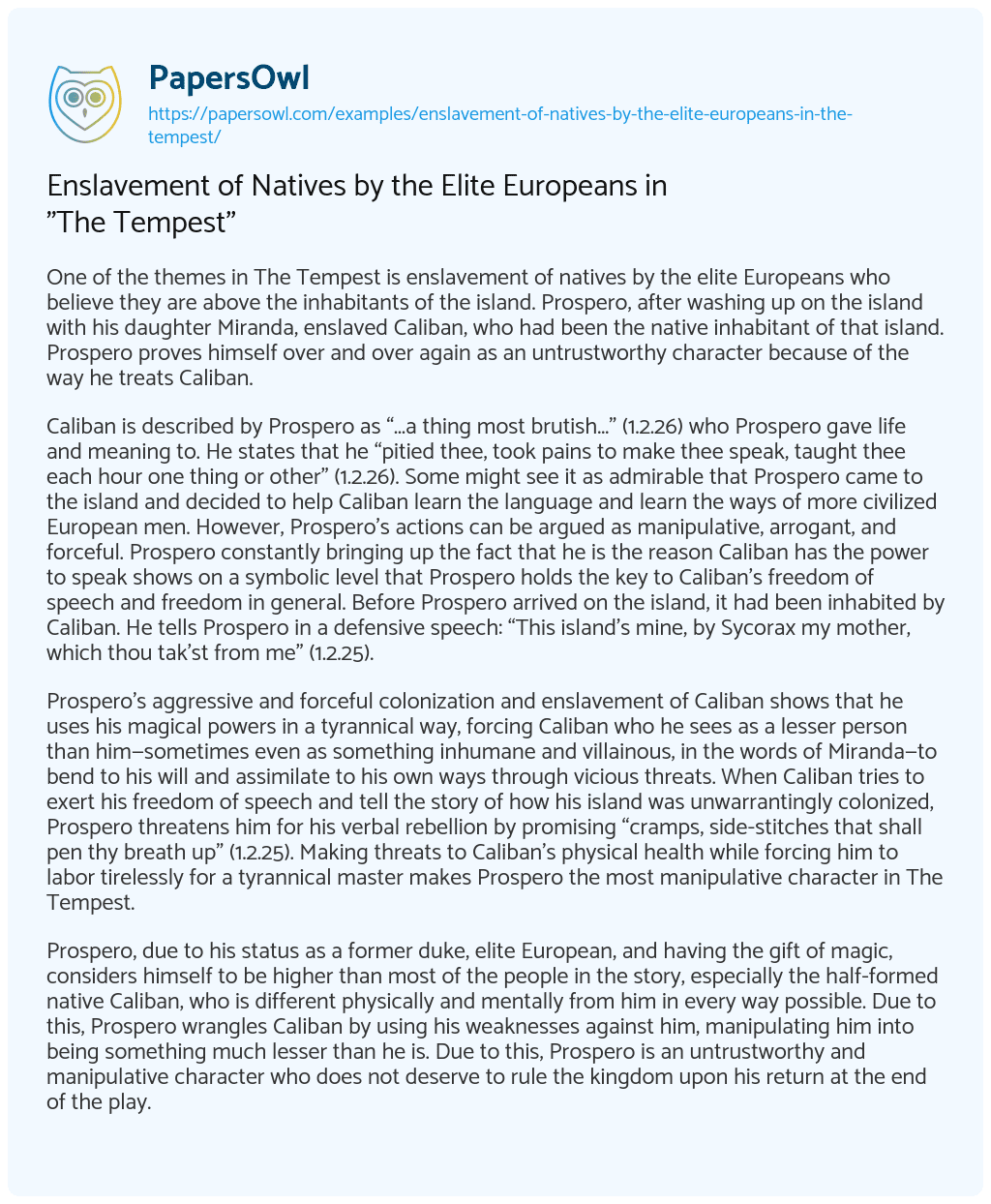 One of the themes in The Tempest is enslavement of natives by the elite Europeans who believe they are above the inhabitants of the island. Prospero, after washing up on the island with his daughter Miranda, enslaved Caliban, who had been the native inhabitant of that island. Prospero proves himself over and over again as an untrustworthy character because of the way he treats Caliban.

Caliban is described by Prospero as “…a thing most brutish…” (1.2.26) who Prospero gave life and meaning to. He states that he “pitied thee, took pains to make thee speak, taught thee each hour one thing or other” (1.2.26). Some might see it as admirable that Prospero came to the island and decided to help Caliban learn the language and learn the ways of more civilized European men. However, Prospero’s actions can be argued as manipulative, arrogant, and forceful. Prospero constantly bringing up the fact that he is the reason Caliban has the power to speak shows on a symbolic level that Prospero holds the key to Caliban’s freedom of speech and freedom in general. Before Prospero arrived on the island, it had been inhabited by Caliban. He tells Prospero in a defensive speech: “This island’s mine, by Sycorax my mother, which thou tak’st from me” (1.2.25).

Prospero’s aggressive and forceful colonization and enslavement of Caliban shows that he uses his magical powers in a tyrannical way, forcing Caliban who he sees as a lesser person than him—sometimes even as something inhumane and villainous, in the words of Miranda—to bend to his will and assimilate to his own ways through vicious threats. When Caliban tries to exert his freedom of speech and tell the story of how his island was unwarrantingly colonized, Prospero threatens him for his verbal rebellion by promising “cramps, side-stitches that shall pen thy breath up” (1.2.25). Making threats to Caliban’s physical health while forcing him to labor tirelessly for a tyrannical master makes Prospero the most manipulative character in The Tempest.

Prospero, due to his status as a former duke, elite European, and having the gift of magic, considers himself to be higher than most of the people in the story, especially the half-formed native Caliban, who is different physically and mentally from him in every way possible. Due to this, Prospero wrangles Caliban by using his weaknesses against him, manipulating him into being something much lesser than he is. Due to this, Prospero is an untrustworthy and manipulative character who does not deserve to rule the kingdom upon his return at the end of the play.

Enslavement of Natives by the Elite Europeans in "The Tempest". (2021, May 03). Retrieved from https://papersowl.com/examples/enslavement-of-natives-by-the-elite-europeans-in-the-tempest/